At last I had a free, probably dry Sunday, and so there was no excuse not to go climbing.  Dave had decided to switch his ‘Dales’ meet to Northumberland, Peel Crag/ Crag Lough under the Roman Wall, just north of Bardon Mill. Paul and I met up 8:30 at the agreed secluded lay-by on the A68. When Dave arrived we had already decided that we would quite like our cars still to be there at the end of the day, and so our first task was to find a not-so-secluded lay-by.

We arrived at Peel Crag around 10:30. The rock is whinstone (Dolerite), and some of the moves are rather slippery even when dry. Paul volunteered to lead the classic ‘Sunset’ as a warm-up in the morning. After a little while, new member Marcia arrived for, I think, her first Sunday meet. David then led ‘Layback Buttress’ a VDiff with slippy start up a layback crack, and we all followed up. Then I led the more pleasant ‘Route One’ with Marcia, while Paul and Dave tackled Tigers Overhang VS 4c. 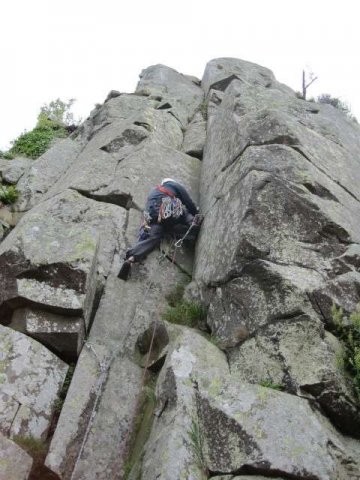 After lunch, we all moved across to Crag Lough. We met one of the staff from Rock Antics on the way. He and some partners are setting up a bouldering wall near Longlands roundabout in Middlesbrough, and so I told him that I would spread the news.

I looked around for something not too testing to lead, and opted for ‘Route Two’, graded VDiff. The traverse looked OK from below, but it was rather precarious and the crux move threatened to throw me off-balance. I eventually found a solution, and the rest of the climb was straightforward. That would be Severe or higher anywhere else. Marcia followed up, and likewise found the traverse rather daunting. Then she had to solve the classic second’s puzzle of “How on earth did he get this nut in?”

Meantime Dave and Paul climbed Hadrain’s Buttress and then Paul led Pinnacle Face VS4c, but David was too knackered to follow.

Then we all finished off with a well-earned drink at the nice pub at Twice Brewed. Paul and I were pleased to find that our cars were still in the lay-by when we got back – complete with wheels as well. All in all it was a good day out. Dry weather and a breeze to discourage the midges certainly helped.