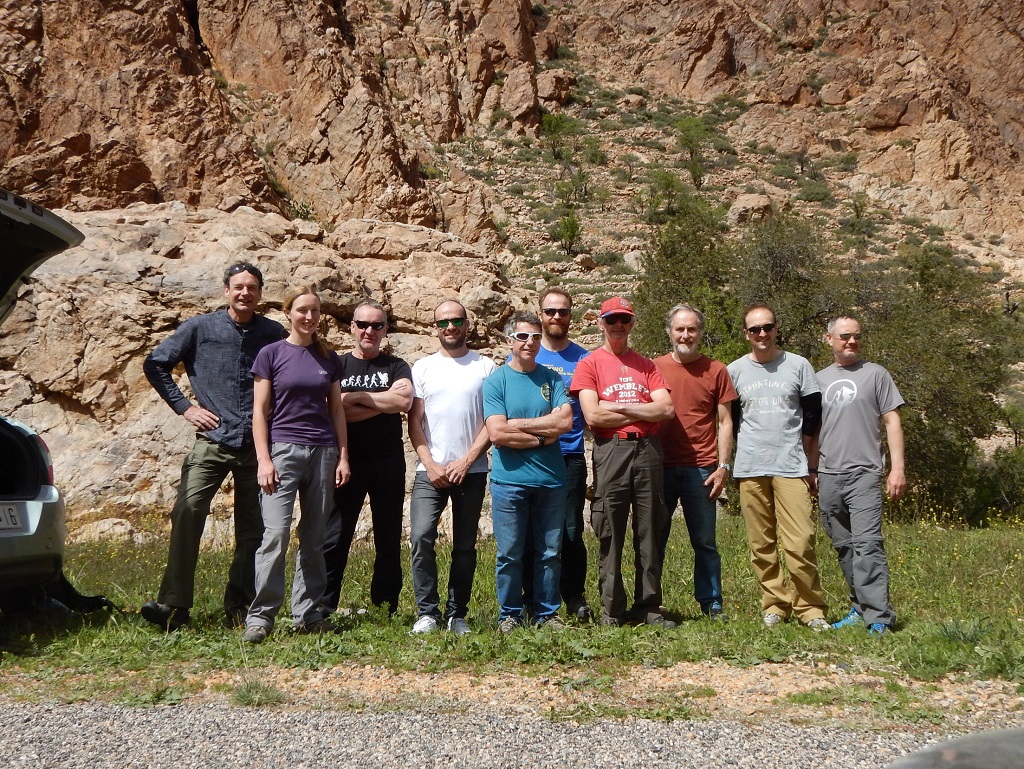 The climbing opportunities on the quartzite rock of the Anti-Atlas mountains have been explored by British climbers including Joe Brown & Claude Davies since the 1990s. The most recent guidebook (Steve Broadbent, 2017) lists 1500 routes on 79 crags around the massif of Jebel el Kest. Ray suggested this trip and the combination of abundant, pristine rock with winter sun proved to be a popular choice. Ten of us signed up, making 5 climbing pairs, namely Ray & Harry, Mark & Ann, Will & Graham, Paul & Dave, Phil & John. After a late afternoon Ryanair flight to Agadir and a few hours queuing for passport inspection, luggage, and hire cars, we were at last ready for the night time drive, south-east up into the mountains. We quickly learned not to challenge oncoming drivers for road space, but the traffic was light after we left the coastal plain. We did wonder about the dark drops over the edges of the mountain roads, but we eventually arrived safely sometime after midnight at Hotel Les Amandiers, Tafraoute, south of Jebel el Kest.

After a pleasant night’s sleep and a good breakfast we were ready for some action. The weather forecast was actually for rain on the first day, but we started out in sunshine. After a brief stop in Tafraoute to buy some lunch food, we set off hopefully, driving to the nearby village of Oumsnat in the Ameln valley. From there it was just a short 20 minutes trek up to ‘Palm Tree’ gorge where we got stuck into our first routes. Sadly, after about an hour a storm blew in with hail, rain and thunder. Some of us were able to shelter under the trees, but the unlucky ones finished their climbs in the storm and then had a wet abseil back down to ground. We had a damp picnic lunch and then trekked back despondently to Oumsnat, and returned to the hotel for some hot coffee. We had already worked out plan B when the rain stopped. The bolted granite routes at nearby Black Wall crag would surely be dry, and indeed they were. Ray and Mark both led ‘Black Wall’ (6b 3*) - the showpiece of the crag. Paul was nominated for the lob-of-the-trip award after coming off a hard unnamed F5 (Yeh, right!) hybrid route.

Happily, every other day was warm and sunny, although it was sometimes cool high on the crags in breeze and shade. On Day 2 we visited ‘Robin Hood Rocks’ about 40 minutes west of Tafraoute, although we all did some extra exploring before we found the right lay-by. Clue – look for the prominent ‘Bunny Ears’ high up on the hillside!  This was an excellent venue and we all did lots of routes in warm sunshine. This is why we came to Morocco in March! Notable climbs included ‘On the Wings of Pegasus’ (VS 4b 3*), ‘Face that Launched a Thousand Ships' (VS 4c 3*), and ‘By the Beard of Zeus’ (HVS 5a 2*), a bold lead by Anne. Classic climbs with classical names.

We were all ready for some bigger, multi-pitch adventures on day 3, and so we drove east along the Ameln Valley towards Tifghalt. Pairs 1-3 headed for the White Tower where Mark & Anne did The ‘White Tower Direct’ (HVS 5a 3*) and the others did ‘The White Tower Original’ (HVS 5a 3*, F.A. Joe Brown 1998). In Harry’s words “The slog up to these two classy trad routes gave a day of high adventure. The Original had a deep chimney pitch, a delicate traverse pitch, then layback, face climbing and jamming pitches leading to a couple of vaguer ‘now-push-for-the-top’ pitches.” Pairs 4 and 5 headed for Tighalt Lower - Crag U. After a hot, tiring 1h walk-in/up, we spent another hour looking around for the start of 'Harbinger' (300m HS 4a 3*). Nothing matched the description in the new guidebook, and the photo had been taken from a distant perspective. We had still not found the route by midday. It was now too late to start, and so we trekked back down the rugged hillside. We were evidently not the first to struggle finding this route according to the UKC log. Still, we had a pleasant afternoon doing single-pitch routes back at Palm Tree gorge, and so morale was restored.

Hotel Les Amandiers was a pleasant place to stay with a French colonial style layout, nice views of the surrounding mountains, and even a tiny swimming pool. More importantly, it had a bar, and so we could end each day drinking cold beers while we reviewed our climbs and made a group effort at some cryptic crosswords. We had two nice meals at the hotel, one of them a house special Tagine, and we had another Tagine in downtown Tafraoute. Judging by the stacks of pottery outside shops, Tagine really was the staple dish. The local Berber people have got used to the idea that Brits come to climb on their rocks, and some of them were keen to talk, and to sell us carpets, if possible. I was even greeted one night in the town with shouts of “Hello, climber”. We had all enjoyed our stay in Tafraoute, but on day 4, it was time to move on to our second venue on the north side of Jebel el Kest, the Kasbah Tizourgane. We had a climbing day on the way, making a detour off the main road along a rough track to Tizi Gzaouine. I struggled leading up 2* ‘Christmas Cracks’, getting in 3 pieces of gear before I ran out of steam. It was hard even following Phil on a rope (supposedly S in old guide, now re-graded as stiff HS). There were several leads of ‘Cirque du Soleil’ and ‘Chasing Rainbows’ (both VS 4c 3*). Mark and later Ray led 'Wall Street' (E1 5b 3*). Overall, it was a really good venue. Rather than take the shortest (wisest) route back to the main road, we all followed Ray along a long, very rough track. The journey was enlivened in one tiny village by 3 jolly ladies who all gave us a wave - an unusual event as most women in rural areas were veiled and remote.

Kasbah Tizourgane stood out well as we approached, perched on top of an isolated hill. We were glad of the winched cage for our heavy bags as we walked up to the ramparts. The kasbah was a confusing place, and it took me some time to learn my way about. The Berber proprietors were very helpful. They told me that the property had been in their family for a very long time. They are upgrading it for visitors, but it is run on traditional lines. The Tagine dishes each night were delicious, and there was something different for breakfast each day. There was no beer on sale (although some groups had brought their own), but they did a delicious mint tea, served with a valiant effort by the waiter to get a head on it.

We were ready for some more multi-pitch adventures on day 5. Pairs 1-3 headed for Taskra East for a mass ascent of the 8-pitch ‘Multiple Pillars of Pleasure’ (HVS 2*, F.A. Chris Bonnington 2010 - aged 76). Harry: “Nice climbing, a tad or two easier than the White Tower routes but quite committing nonetheless.” The rest of us headed for Adrar Asmit with Phil driving down and then up the roughest track of the holiday. After an hour’s trek up the hillside, this time we were pleased to find our route, ‘West Side Story’ (S 2*), without difficulty, although the start was somewhat buried in a tree. It was enjoyable overall, although Phil’s pitch 2 had some loose rock.

On day 6 we all headed for Ksar Rock. This was a splendid place to climb, and everyone had a great time on lots of routes, both single- and multi-pitch, with 3* ascents made of ‘Desert Man’ (S), ‘Morocco Coco’ (VS 4c), ‘Solar Event’ (E1 5c), ‘Pelez/Pour Manger’ (HVS 5a), and ‘Jedi Groove’ (HVS 4c). Harry: “For me this was the best cragging venue of the trip - did 4 routes with Ray and got 12 stars! Here the fearsome-looking usually turns out to be climbable and sometimes even properly protectable”

We had a late flight on day 7 and so we had a last half-day climbing at nearby Anammer crags, another great venue. After repacking all our luggage at the side of the road it was now time to head for the airport which we made in good time. The car-hire agent was rather cross at the dirty state of Phil’s car, but he got over it. We had been on some very dodgy, dirty tracks! Security was time-consuming after a recent outrage in London, but eventually we could relax and wait for our flight. My only regret of the holiday was the dodgy burger which I ate at the airport. The effects of Campylobacter came on 2 days after I got home and took another 2 weeks to clear my system.

Overall, it was great climbing holiday - so much splendid rock to climb, so much warm sunshine. We didn’t manage to do any of our planned longer expeditions – up to Jebel el Kest, for instance. Hopefully, we will be back, maybe for 10 days next time. Thanks to Ray and Phil for the organisation, to all the drivers, and to everyone for their enjoyable company. We will all have many memories of Morocco and its Berber culture. I think of traditional Berber gowns worn everywhere, veiled women foraging for animal fodder, overloaded donkeys, abandoned terrace fields, and lots of prickly bushes and cacti. Harry bought himself one of the gowns, he says, to chill about the house, but if you see a Berber tribesman wandering around Bedale, that’ll be him. Finally, well done to Graham who went back to Morocco a few weeks later and finished 32nd out of 1100 (1180 starters) in the Marathon des Sables, a gruelling 6 day event crossing 250km of desert.