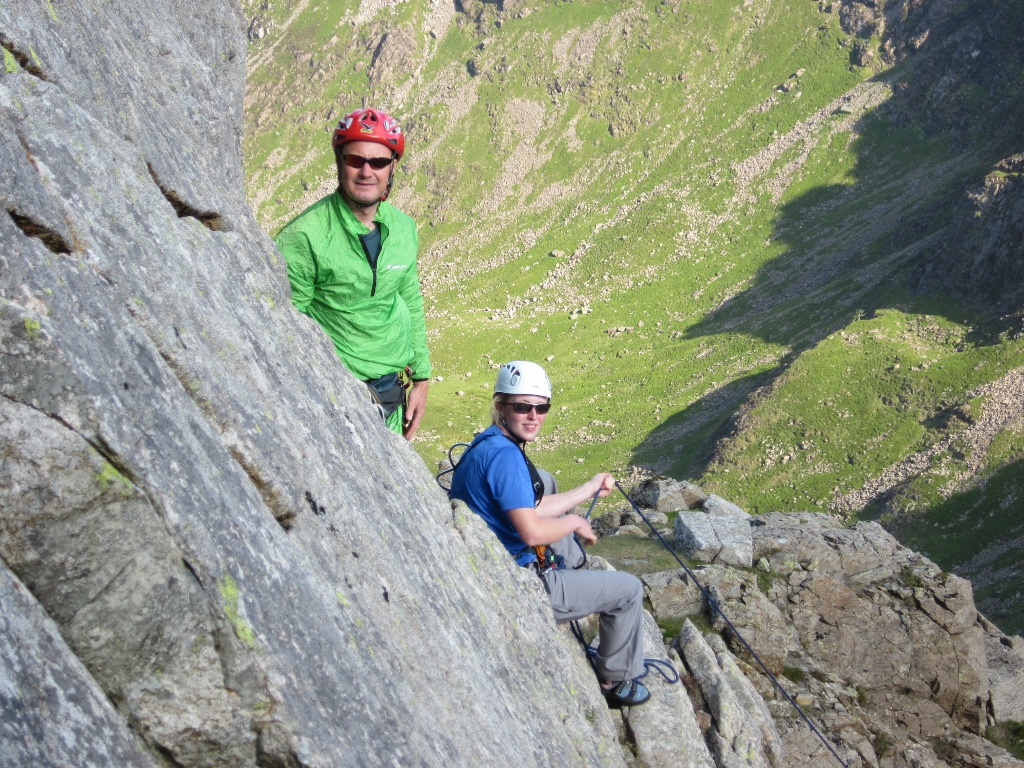 Six of us set off from Scotch Corner in Phil’s people carrier. Phil was keen on a visit to Eagle Crag above Buttermere for some hard routes and some shade from the July sun. The rest of us voted for the nearby Grey Crag, a series of four buttresses up the northern spur of High Stile. It has a wide range of grades which include some splendid lines on grippy volcanic rock. The trek up to the crag took around 90 minutes, quite a long haul with climbing packs under the hot sun. A cold wash in the stream near the head of the corrie provided some welcome relief. We arrived at the base of the crag shortly before midday where we were met by Andy and Astrid who were already on a route.

They had bivvied in the corrie overnight for an early start and had woken in morning mist, but there was full sunshine now. Our pre-negotiations about racks and ropes had not been a great success, and so we decided to climb in threesomes, leaving two redundant (and heavy) racks at the bottom. Dave, Anne and I alternated leads up Mitre Buttress Direct (MS, 2*). We then made our way to Oxford and Cambridge Buttress, where we waited for our chosen route to become free. Phil meanwhile was leading Janet and Ginny up Harrow Buttress (D), posing for the photo at the top, and then Chockstone Ridge.

Andy and Astrid had been and gone long ago when the rest of us started up the final Buttress. Anne and Dave led the 2 pitches up the classic arête of Oxford and Cambridge Direct (MS, 3*), while, Phil led Central Route (VD) a few metres to the left. We were able to chat and take photos of each other all the way up, making for a convivial finale and summit photo. We finished off with a welcome drink at the Fish Inn in Buttermere, very content with an enjoyable mountain day out!