So it was that time of the year again to dust off the ice aces and think about travelling to Scotland to sample the delights of winter climbing in the UK. Dave had made his usual booking for the CIC hut under the north face of Ben Nevis, allowing quick access to the best ice climbing in the UK and the plan was set. Unfortunately with temperatures forecast to be around +10°C the weather wasn’t quite lining up for us so the trip moved to the Chamois Mountaineering Hut in north Wales!

So Dave, Paul, Ian and I squeezed into 1 car and headed south instead of north. It was perhaps a little early in the year to climbing in the (Llanberis) Pass so instead we focussed on Tremadog and Gogarth, both of which offer significantly easier approaches than Ben Nevis. The Chamois hut is also ideally placed just outside Llanberis giving short drives to all the best climbing areas, as well as been large enough to have a wing each! Although on Saturday night there was another group using the hut I still managed to find a spare room to get away from the snoring members of our group (mentioning no names).

On Sunday we headed down to Tremadog to take advantage of the unseasonal warm weather. I teamed up with Ian, and with Dave and Paul climbing together we headed off towards Craig Pant Ifan. We got stuck into a route called Scratch Arete, a superb 2 pitch HVS 5a while Dave and Paul tackled the classic VS 4c ‘One Step In The Clouds’. It was great to be rock climbing so early in the year and although the nights were still drawing in early there was just time for another route. Ian and I got on ‘Leg Slip’ (E1 5b) with Dave and Paul finishing on ‘Christmas Curry/Micah Eliminate’ (HS 4b).

Monday and we managed to talk Dave into driving us to Gogarth for a spot of sea cliff action. Ian and Dave headed off to climb ‘Britomartis’ (HVS 4c) in the Wen Zawn, while Paul and I looked from the promontory and planned our assent of ‘A Dream Of White Horses’ (HVS 5a). 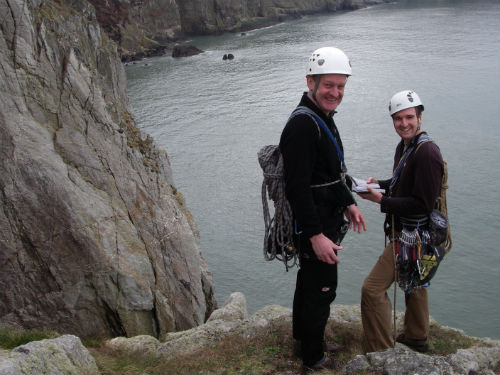 Unfortunately, if you look at this climb from the cliffs opposite the route the slab looks absolutely terrifying!! Trying to pick out the belay ‘ledges’ is near impossible and there was definitely a sense of impending doom in the air.... especially if we abseiled down the slab!! We got as far as walking round to the top of the abseil before a hasty retreat to the bottom of Britomartis and the relative safety of following Dave and Ian! 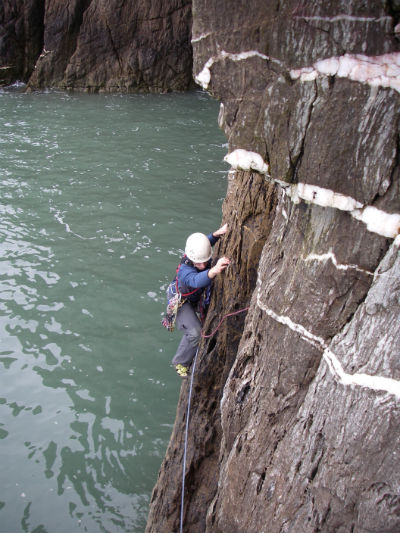 Ian Walking on Water on P1 of Britomartis

This was still a magnificent route though starting at sea level with a 36m right to left steep rising traverse pitch with some of the best holds in north Wales and the seals swimming round the base! A hanging belay at the end of P1 was taken above the sea and following a quick check of the guidebook we embarked on P2. Unfortunately that was the last that was seen of the guidebook which had a wet finish in the sea as Paul ‘Butterfingers’ Sheehan moved off the belay! 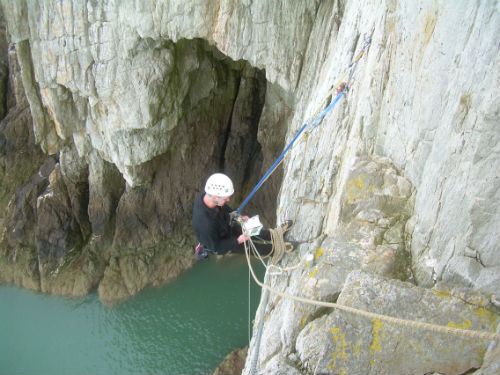 Do You Think Seal's Can Read Guidebook?

Tuesday was our last day and we headed back to Tremadog for a few more routes. Stocked up with a new guidebook Ian and I tackled ‘Merlin Direct’, another superb HVS 5a, while Dave and Paul headed down the road to do the classic rock tick ‘Creagh Dhu Wall’ (HS 4b). Thinking we perhaps had time for just one more route, Ian and I managed to squeeze in ‘Vector’ (E2 5c) before we headed home, albeit with the route taking quite a while the departure was a little later than planned!

Still, a great start to the season albeit a slightly warmer one than planned!