Back to the Peloponnese 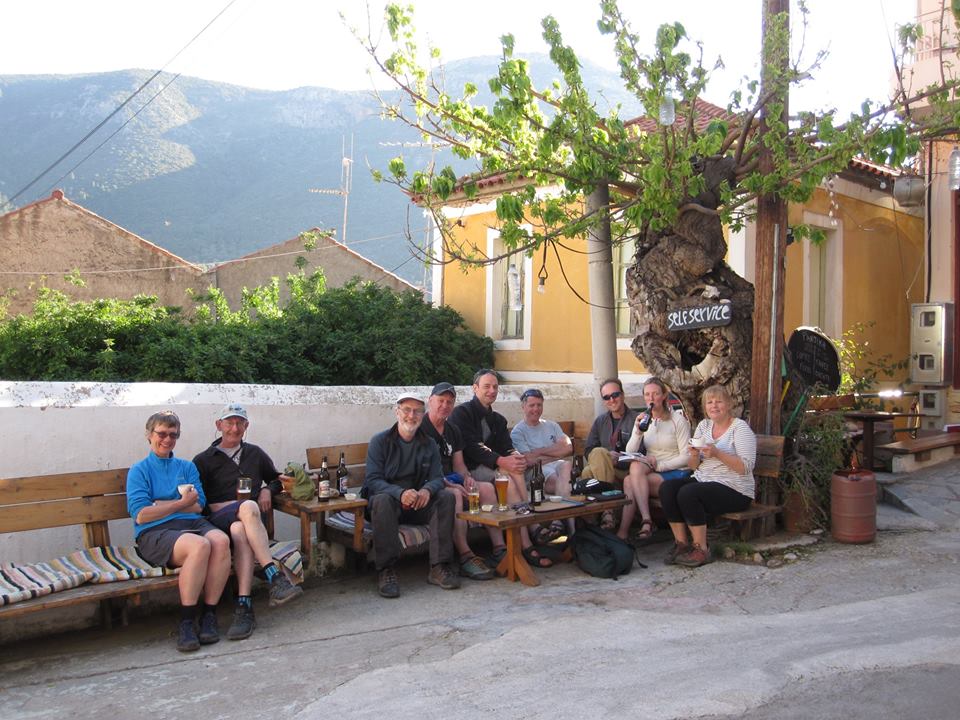 Back to the Peloponnese

Eight climbers and Jane the walker enjoyed a return visit to Greece in early April. We stayed just outside Leonidio, near the harbour, Plaka. The weather being mainly fine, we did plenty of sport-climbing on the high limestone cliffs inland and lower cliffs near the sea. Phil, Janet, Paul and John made up one climbing team, and Ray, Harry, Mark and Anne, the other. We climbed together some days, but split up other days. Team 1 had big days at Bella Vista and Skiadhianiko, and shorter days at Sabaton (rained off) and ‘Cool at the Pool’, where a swim in the sea was an enjoyable bonus for some. Team 2 had big days at Rocspot, Bella Vista, Sabaton, Theos Right and Love Ledge, a recent development, not in the 2018 guidebook. A timely tipoff from a Lancashire team enabled multiple leads at Love Ledge of ‘Dirty Lies’, a “luxuriously soft F7b before it gets downgraded in the next guide!” Phil and Paul did a 7-pitch bolted mountaineering route one day – Mignonette, 170m: “an excellent day’s climbing with views over Leonidio to the sea.” The rest of Team 1 did a pleasant hike in the hills above Poulithra – lots of wild flowers in bloom.  Phil, Janet and John hired MTBs one day for a ride relentlessly up the Dafnon gorge to Elona monastery and on up to the village of Kosmas (4100 ft ascent), followed by a fast and winding descent (37 miles total). Some patches of snow were still lying by the road at the top, but Janet dodged my snowball. One of the great attractions of this area of Greece is dining out in the evenings – gorgeous food and great variety, especially local fish, and all very reasonably priced. ‘Special’ host Thomas was in fine form once again at ‘Dolphins’, Plaka. The rain came down heavily on our last night at Leonidio. Phil set off in the early hours on the drive back to Athens airport with one group. Mark drove the rest of us (Ray, Harry and John) next day over the misty mountains and down the new coast road to Kyparissi where we stayed for 4 nights. We had an excellent climbing day at ‘Kastraki’, a short walk from our apartments, then a very wet day. John went for a wet walk up to the big overhanging cliff in the ‘Watermill’ sector, while the others played French pool. The sun shone again on day 3.  Ray, Harry and Mark headed up to Watermill, and climbed routes up to 7a (Trypes). John meanwhile hiked in the hills up to Agios Varvara, and saw an eagle (Bonelli’s) and a herd of wild pigs. The waymarkers eventually died out, and the improvised return by compass through scrubland and down a long gully was a “bit of an epic”.