Two Classics in one Week

A spell of dry weather allowed Chris and I to do two classic SRT cave trips in one week. Recent attempts on Gaping Gill Main Shaft Dihedral route and Diccan Pot had been thwarted by wet weather; both of these trips need settled conditions due to fairly large stream ways/water falls that are active in both these caves. For me both these trips have been ones to aspire to for some years, both require a degree of technical competence and confidence in SRT techniques, these are not places to be faffing around on the rope! 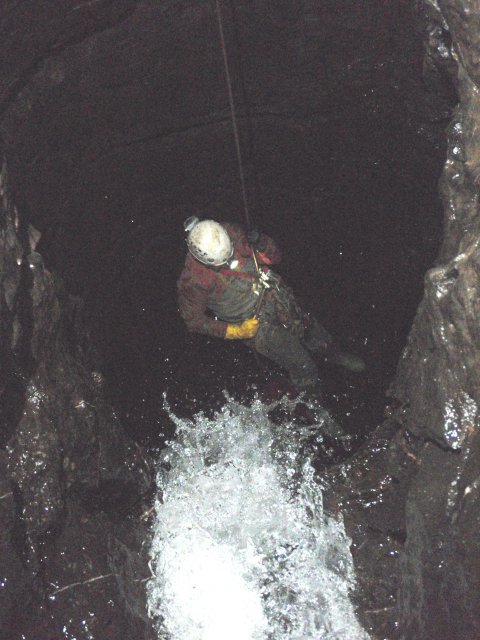 Gaping Gill used to be the deepest natural shaft in the country at 110 metres until Titan was discovered in 2000, but Gaping Gill is certainly more spectacular, being an open daylight shaft with impressive water falls. The initial part of the descent is in a small parallel shaft, and even in the dry conditions there was a significant amount of water going down. Stood over this pitch head looking down the view was very impressive, with the daylight section clearly visible below us. The rigging required four deviations to keep us out of the water flow, Chris seemed to enjoy swinging around in the water fall while rigging these, I had a similar unavoidable experience de-rigging, very exhilarating! About half way down the shaft we knew we had to swing onto a ledge and then rig down the side of this. Nearly half way down we managed to swing into a rather narrow but exposed rift with no obvious way on, eventually we decided we had taken the wrong route, so we swung back out into the main shaft and down another 10m to a ledge that looked more promising. 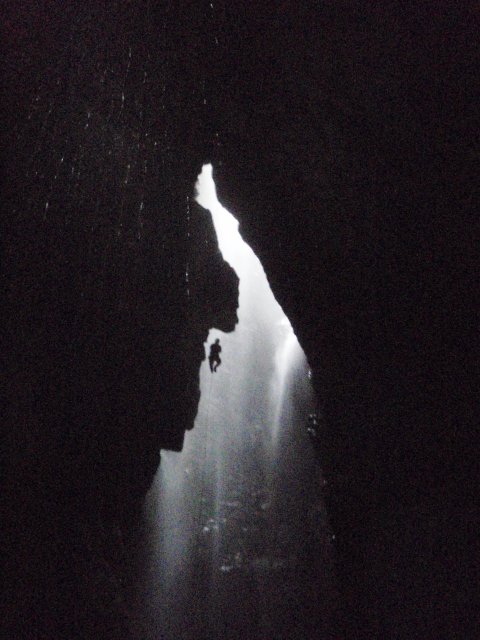 The view from here was truly amazing, daylight streaming in and water crashing down onto Birkbecks Ledge. The final free hang re-belay 30m above the Gaping gill chamber floor was successfully rigged and passed, and we ended up in the main chamber. I had only ever visited this chamber on Winch Meets when it is illuminated and dry (the water is diverted away). It was much more impressive to see it illuminated with the main shaft daylight with the water crashing down the100 metre fall from the surface. We briefly admired the view and then Chris headed out retracing our steps, and I followed, de rigging and taking a few pictures on the way. On reaching the surface I noted that Chris still managed to exit the cave in a muddy condition, a very impressive achievement for such wet trip, the "dirty boys" reputation lives on! 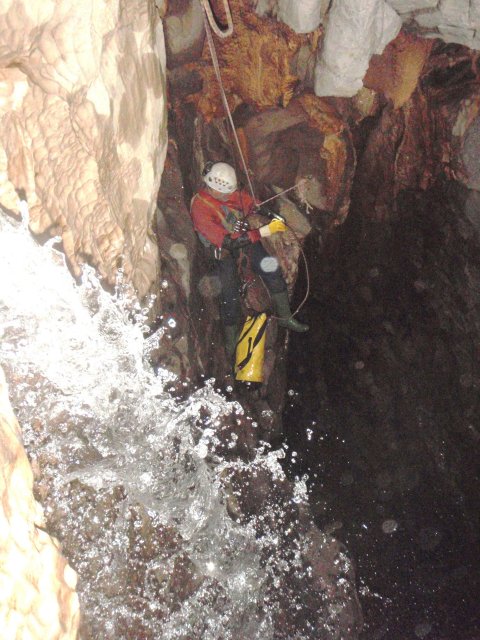 Four days later and it still hadn’t rained again; it seemed too good an opportunity to miss for visiting Diccan Pot in these dry, warm conditions. Diccan pot has the reputation of being an extremely wet, drafty, cold and hostile place. The 60m entrance pitch was rigged and the bottom section was indeed wet, cold drafty and hostile, I certainly would not wish to visit there in the middle of winter! 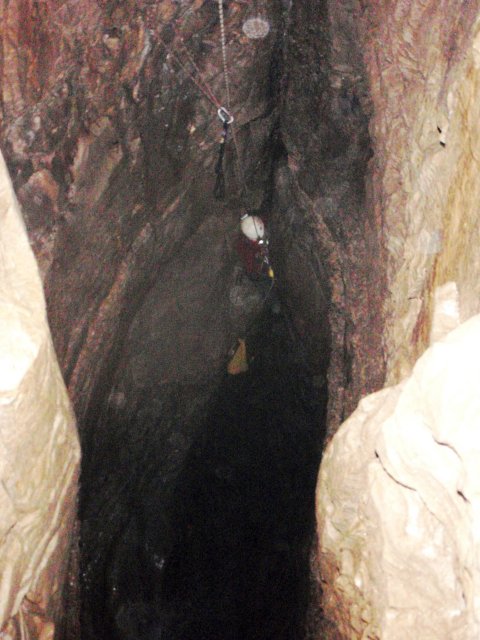 The next four pitches all require fairly technical rigging and a few acrobatic manoeuvres to reach some of the hang points, Chris was in his element! We successfully reached the bottom, congratulated ourselves on our achievement, boosted by the fact we hadn’t got lost this time. We had a quick look up Allum pot, before heading out. The exit was complicated by another group of six who were heading down after us, as communications are near impossible in this environment, we ended up passing this group mid pitch which was rather entertaining! The de-rigging was also complicated by their gear, which they had unkindly rigged over the top of ours, bad etiquette.