The programme boldly stated "Out Sleets Beck Pot", but the weather suggested otherwise. Out Sleets is a real gem of a cave at the head of Penyghent Gill, but the significant stream that gushes past the dammed entrance sinks just down the hill and enters the cave before the first pitch. The pitches are "sporting" and there are wet crawls and a duck, preceded by a very interesting move across a bottomless pool to gain a bottomless rift. All these suggested that grabbing a brief lull between passing weather systems wasn't the day for Out Sleets.

We fortified ourselves in the cafe and prepared for a lengthy game of "whatabout". This turned out to be surprisingly short and we dismissed the slightly doubtful visit to Lancaster Main Drain in favour of a tour of Link Pot. Bull Pot Farm was quite busy with teams visiting various parts of the Easegill system, but there was nobody else down Link Pot. The entrance rigging is simple; the narrow descent always feels as if it will be  areal struggle on the way out. SRT kits off at the bottom and we went via Bypus Pybus, past the start of the Wallows route to Pippikin Pot, to Black Holes.

Double back underneath and a short crawl leads to an easy step across the Canyon and on to China Dog Chamber. From here several steps across voids lead to the ledge of Tiger's Inlet. We took our time to enjoy this lovely section of passage, then took a detour to Handpump Hall (on a recent trip here we investigated the right branch, which appears to close down on the survey, but in reality goes on and on as an endless? flat-out crawl, but not today). Drop down through the floor and after a quick investigation of Whisper Aven, we found Cairn Junction.

I'd made a big deal of avoiding Molten Mars Bar Crawl, but after a few minutes realised that I'd failed. It was slightly undignified, but not really unpleasant. Soon the passage was opening up as we approached Serendipity. Here a lively stream crashes down 3 pitches into the fantastic Easy Street. This is best left for drier conditions as the pitches are very wet. We free-climbed down the first to take a look down the second, then explored the inlet upstream, noting the obscure climb up to the Lone Ranger series (maybe one day).

Our return found the more pleasant route to Cairn Junction via Death Row and we made a direct return to the start of Bypus Pybus. We turned left here, past the junction to Hylton Hall and found the route through several boulder chokes to the top of Echo Aven. Here we encountered a student group heading down the pitch to attempt the route through to Lancaster Hole. We raised our eyebrows slightly that their aid to navigation through one of the trickiest parts of the Easegill system was a series of photos of the survey on a digital camera.

We retraced our route to Hylton Hall, spotted our second bat of the day and prepared for 10 minutes of grunting up the entrance pitch. I somehow found this surprisingly straightforward, so Danny gave himself an extra challenge by jamming his descender in his ascending gear. We de-rigged and headed back to the farm. A quick pint in the Whoop rounded off a very satisfying day with around 3 energetic hours underground. The section of the survey below shows our outward route in yellow and return (where different) in green. It gives an idea of the complexity of the routes in the three-dimensional maze of the Easegill system. 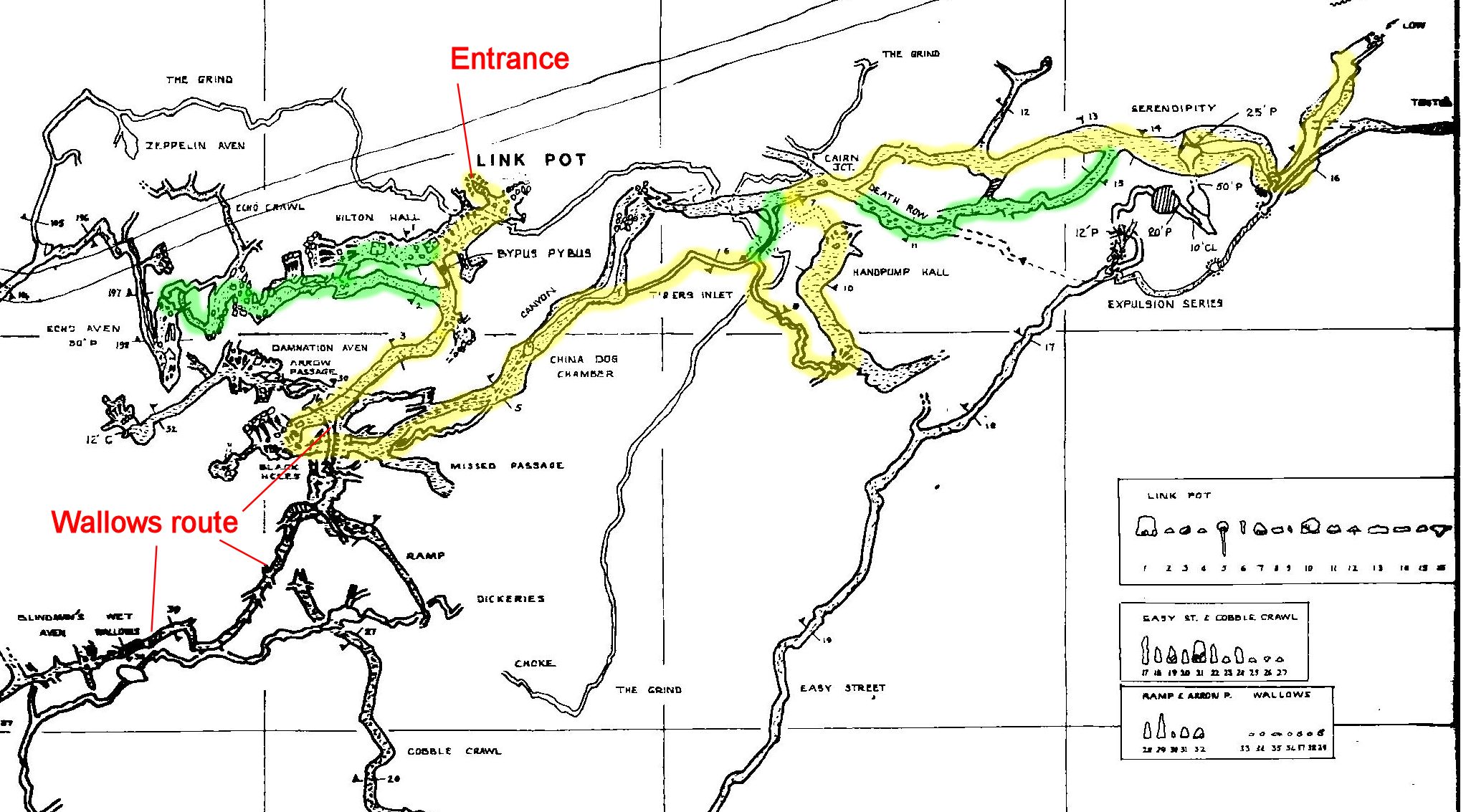