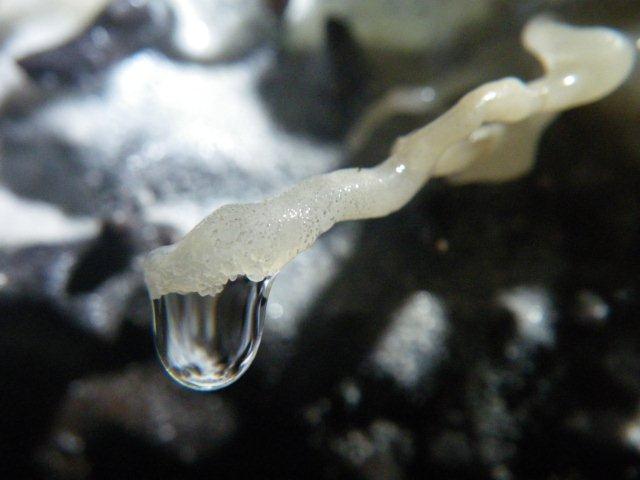 Chris T joined me on 21st June for a visit to Pippikin Pot's Waterfall Chamber, via Mistral Hole. That was the programmed trip, but with the forecast suggesting afternoon showers, some heavy, I thought it best to play safe. Waterfall Chamber isn't the most comfortable place to be wondering what the weather is doing on the surface.

We opted instead for a pull-through trip from Pool Sink to Wretched Rabbit; 2 of the entrances to the vast Easegill system. Pool Sink starts with a bit of a contorted wriggle around a couple of bends before the passage increases in height to the first pitch. This was simply rigged with the abseil rope threaded through 2 hangers and down the pitch until it was stopped by the big fat knot joining it to the pull down rope. I abseiled down the 17m pitch and called "rope free" to Chris, who followed, bringing the bag with the pull down rope with him. Once down, the ropes pulled easily through and we stuffed them into the bag ready for the next pitch.

The junction with the main Pool Sink stream is very close to the foot of the pitch, but rather than heading downstream, I was keen to pay a visit to Magpie Grotto, which is upstream. I initially chose the wrong passage at a junction and the passage lowered to flat-out crawling in the stream over very slippery cobbles. We went back and found the other branch and soon entered the well decorated Magpie Grotto (so named for the black and white colouring of the formations). I took some photos and Chris some video and we explored the area and found some excellent helictites.

We carried on pulling through the 2nd, 3rd & 4th pitches of Pool Sink, spotting the remains of the T-piece of the original exploration on a ledge in Lower T-Piece Passage. This is great caving; quick descents of short pitches with liveley, winding, descending stream passage in between. Green and Smelly Passage followed and we took the route with the stream to Holbeck Junction (this is where Pool Sink joins the Easegill Main Drain). A few minutes of fun caving (clambering over boulders, wading through pools and general "follow your nose" route finding) and we were at the bottom of Stop Pot and a route choice. We could take the shorter dry route via Four Ways Chamber to Wretched Rabbit or follow the water to Eureka Junction and take Wretched Rabbit Passage from there. We decided on the latter and it took about 45 minutes of energetic caving to reach the surface. The climbs are always a sting in the tail and we felt adequately exercised by our 3 hours underground.

A quick pint in the Whoop and I was pleasantly surprised to arrive home to a special Fathers' Day meal. What could be better?