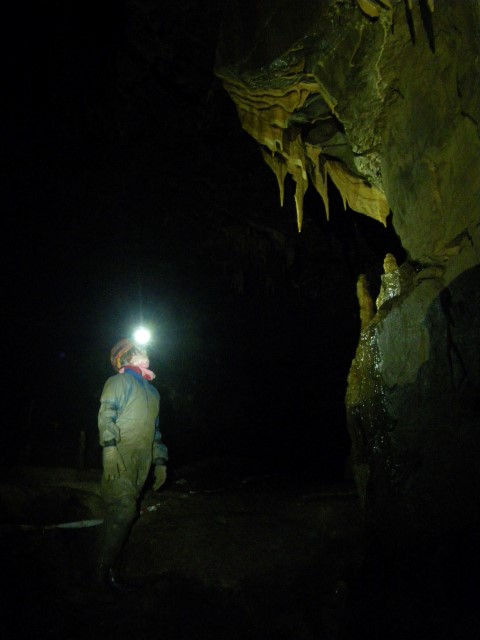 We'd planned this trip as an easy SRT excursion to Heron Pot. Heron has a couple of short pitches and an optional way out at the bottom. It does carry a decent stream however and high water levels make the pitches dangerous and the bottom exit impossible. With a wet week leading up to the trip and a wet forecast for the day, we needed a plan B.

Mistral had been on Isobel's list for a while and is fairly bombproof in wet weather, so that was quickly decided. Our group consisted of Alison, Isobel, Ariana (shiny new member, but an experienced caver) and me. Suitably fortified with second breakfast at Ingleton, we arrived at Bull Pot Farm in the rain for a less-than-pleasant change and march across the moor to the cave next to the dry Easegill streambed. A rope was rigged for the entrance climb where Ariana found 1, then 2 small frogs. As we were trying to liberate them, we heard another group coming out through the entrance crawls. We perched on various ledges to allow them to pass and asked them to take a frog with them (the second had disappeared).

Ariana led on through the twists and turns and emerged into the large chamber known as the Hobbit. We then walked, stooped and crawled to Dusty Junction and through the large dry passages to the Hall of the Ten. An entertaining descent to the floor of the chamber, followed by a climb up the far side led to a choice of routes; decadent muddy wallowing in the Hall of the Mountain King or onward to the pretties towards Gour Hall. Gour Hall won and easy going past excellent formations with some flat out crawls took us through Cross Hall and finally to Gour Hall with its excellent stalactites, curtains and gour pools. Alison and I did remark on the number of small inlet streams that we had never noticed before.

We made fairly rapid progress on the return (Isobel leading the way and the rest of us doing our best to keep up!). At the entrance climb, the frog had reappeared, so it was duly liberated. The rain had stopped, but the previously dry stream bed was now running brown in full spate. We carefully waded across the strong flow to return to the farm, very pleased that we had made the decision not to go to Heron Pot!