This was my first visit to Lost Johns and I was quite looking forward to it; I'd wanted to do the trip for many years but never managed it. Fortunately I had Chris, Bob E and John G to show me the way.

Over breakfast John suggested a visit to Shale Cavern and Sink Chamber via Cathedral and Dome pitches would be a good introduction to the system.

Water levels were low as we progressed through the entrance series and soon the stream was disappearing below as we entered the New Roof Traverse. A couple of short pitches were then encountered followed by a traverse out to Cathedral pitch; this was fairly straight forward with one deviation (or rebelay) about one third of the way down a fine shaft.

JG at deviation on Cathedral Pitch

At the base, a squeeze down a narrow descending passage led to Dome which was a free hanging pitch down another equally fine shaft. Another short pitch led us into Shale Cavern, named after a wide shale band of volcanic ash sandwiched between limestone. Finally another short pitch led us into Sink Chamber where we viewed the Battle Axe Sump, a large waterfall (coming from Monastery) and an impressive pinnacle. 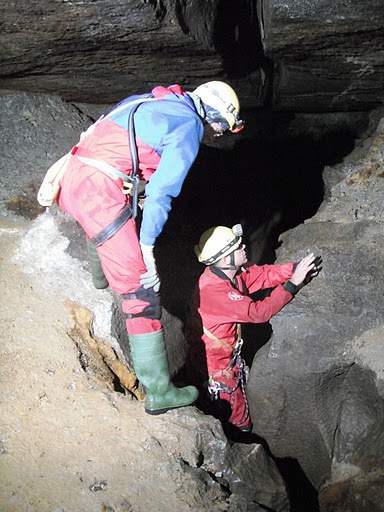 Bob and John inspecting the shale band in Shale Cavern

The return trip was straight forward with John and Bob E derigging (as Chris and I rigged the on the way in) being back on the surface by 3.00pm and then in the Whoop for refreshments 20 minutes later.

A very enjoyable trip and an excellent introduction to a fascinating and extensive cave system.

Below: Traverse at  Cathedral Pitch