On the trip over from Richmond water levels at the various check points looked a little on the high side following the heavy rain the previous day; however this was not likely to be a problem providing the water which normally flows down Jingling Cave is not over flowing into the open pot.

Pete on the entrance pitch of Jingling Hole.

The first pitch was rigged and I descended to try and find the lateral cleft which the guide says is 9m down; unfortunately I totally overshot and was far too low so had to climb back up. At this point those on the surface reported that the rumbling noise I could hear was thunder; the last thing I needed was the tree I was hanging from getting struck by lightning.

Richard then had a go and found it easily; I still can't understand how I missed it as it's fairly obvious. Richard and Pete rigged the rest of the pitches to the bottom of the main shaft and was followed by Karen and Elaine. I rigged the final pitch which took us down to the dig at the very bottom. Fortunately on this occasion there were no rotting sheep remains to spoil the ambience. 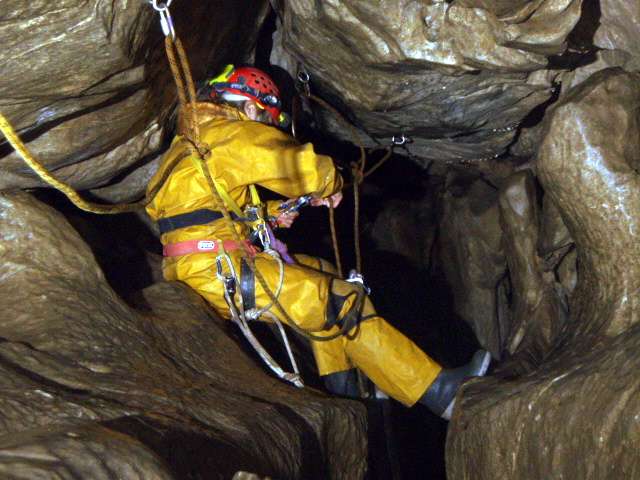 Elaine preparing to descend the final pitch in Jingling Pot.

The climb back out into the sunshine was straight foward. Our panting and wheezing as we emerged probably amused the team of experts from the North Pennine Club who did the advance SRT route about five times each in the time it took us to do the lateral cleft route once.

A refreshing pint followed at the Marton Arms.