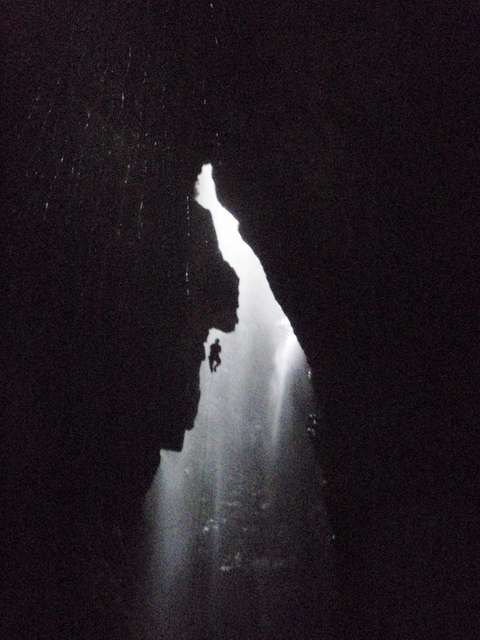 We finally got to do this trip, after several postponements due to inclement weather. Conditions were dry – about 4mm of rain the preceding Tuesday was all we'd had for a week.

Bob and I met in Bernie's for a fine breakfast, then off to Clapham to the cave.

It was pleasantly cool for the walk up, and we arrived around 12 to find our way in.

Fell Beck was flowing down the main shaft, and down our route (Jib Tunnel, just beside the main shaft). Probably wouldn't want to try it with a lot more water – it was wet enough, even in dry weather conditions.

Traversed out to the pitch head, and set off down carefully hunting for all the deviations, and admiring the stupendous sunlit view – found them ok, then followed a fixed traverse line (towards Rat Hole?). That didn't seem right, so I waited for Bob to catch up. After some discussion, we decided we should descend a bit further to a ledge.

Did that, and after further discussion, decided we were in the right place, and started to rig the second rope. This too was more straightforward than expected, and we were rapidly down to the floor of the main chamber.

Bob took some pictures (more here), then we set off back up. With just two of us, there wasn't much waiting around, and we were up and out fairly swiftly – quicker than the route down as there were no detours.

Back down the hill to the New Inn for a well earned beer.

A really stupendous vertical trip with fabulous views, but only for dry conditions.