The Borehole to Boundary Pot 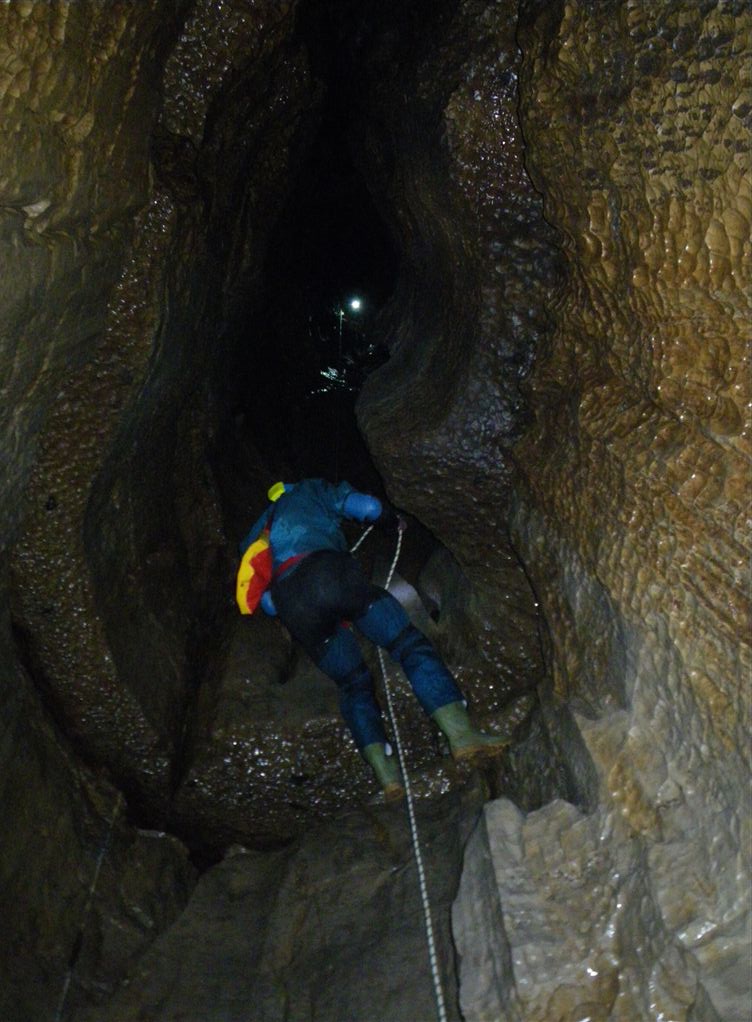 The programme said "Pool Sink to County Pot", but the weather had been so dry in early September that it seemed silly not to do something flood prone! I'd bounced a few ideas around in the run up to the trip. Danny, Tim, Bob E and John G were all keen, but we'd made no decisions before the day, then Danny couldn't make it. Over breakfast Bob announced that the Borehole was on his wish list, so we decided on Borehole to County, giving us the options of Trident, Ignorance is Bliss or Mancunian Way / Easegill Aven / Dismal Junction depending on how strong we were feeling. We met John at Bull Pot Farm and he said why not do the Borehole to Boundary Pot? Both are entrances to the vast Easegill system that you really don't want to be near on a wet day, so that seemed a perfect choice.

The Borehole is a nice clean cave. It takes a huge flow of water in flood, which ensures it remains flushed clean. A short way in you wriggle along a canal and pass an inlet directly beneath the surface stream bed. It takes around half an hour of mostly crawling to reach the single pitch. This is now equipped with shiny hangers, which I used in preference to the scaffold bar that has been there for years. The bar is safe enough, but the rope can jam when pulling through. All of us safely down the pitch, we pulled the rope down. That's always a good test of commitment, since it's a very good idea to be able to find your way out once the rope is down. The lower half of the cave is a tortuous winding passage - it doesn't succumb lightly! The cave changes character and the route finding becomes challenging from Mottershead's Chamber via breakdown chambers and an obscure climb down into the lower streamway, Eccles Bypass and a final emergence in the lower reaches of Pool Sink.

We took the high level traverse along Upper Green and Smelly Passage (so named from the day when the early explorers were studying the hydrology and introduced fluroscein dye and drain stenching agent into the surface streams - both were encountered in the passage, hence the name). The traverse is mostly 10 to 15m above the stream and I had one wobbly moment when facing a manful stride across the chasm. John manfully strode, followed by the others and I pulled myself together and got on with it. We climbed down into Lower Green and Smelly, then emerged at Holbeck Junction (where Pool Sink joins the main Easegill water). From here we took the stream route upstream to the Assembly Hall and a brief visit to the still magnificent Easter Grotto. A traverse in the roof over the top of the climb up and several other holes led us upstream and into the large quiet Nagasaki chamber.

I'd only visited Boundary Pot once before, in the opposite direction, so this was to be a good test of navigation. The route out of the lower reaches of Nagasaki and into the streamway was OK, then I was conscious of looking for a traverse line so that we stayed up as the stream cut down. This led us to some familiar looking scaffold bars that marked the base of Manhattan Connection - the breakthrough point that was dug through in 2012 to connect Boundary Pot with the Easegill system. Up the scaffolding and then quietly and carefully through Hiroshima (these places are so named after the amount of collapsed boulders and seeming devastation in them and are not good for parties!). There were a few decision points on the route out of Boundary Pot - it is quite a complex cave and the easiest (and tackle free) route isn't always the most obvious. Eventually we could smell the sweet outside air and emerged to a lovely warm afternoon in upper Easegill.

A walk back to the farm and celebratory pint in "the Whoop" concluded a fine trip. 3½ hours underground, but it was fairly full on most of the way with lots of energetic crawling.