After an unexpectedly dry week, this trip was finally on – after many attempts rained off. Paul & I met in Buckden at 9.30 – got changed, walked to the farm, and on up to the entrance – underground by 10.30.

The entrance series was easy enough, until I clambered over a boulder to find no way on – just an impassable 4” high bedding plane crawl. That’s Bradford Crawl Paul said – you may have to excavate a bit.

The next few metres were slow progress, as I inched in, shifting rocks to the side as I went, giving myself a body sized tube in the middle. After that it was easy going for a while to the 1st pitch – which we’d planned to bypass, since I’d been down the bypass before. Around the first pitch then, down the rift by the right hand wall, and onwards.

Then through the First Wet Bedding – it’s a bedding, and it’s wet. There is a bypass, but Paul didn’t mention that until we were through. Then came the imaginatively named Second Wet Bedding, followed by Moon Milk Cave. Then there’s a choice of a squeeze and a small drop, or a clamber over the top and a bigger 4m drop – we went for the 4m drop on the fixed rope there. After that we came to a window overlooking the 2nd pitch – we backtracked and found the obscure hole leading down to the pitch (Cascade pitch). The pitch is a traditional ‘80s ladder rig (in the water) – not too hard to straddle out wide beyond the water on the abseil down. Beyond here there’s a traverse, a bit of a duck, more fine flowstone and some gour pools. 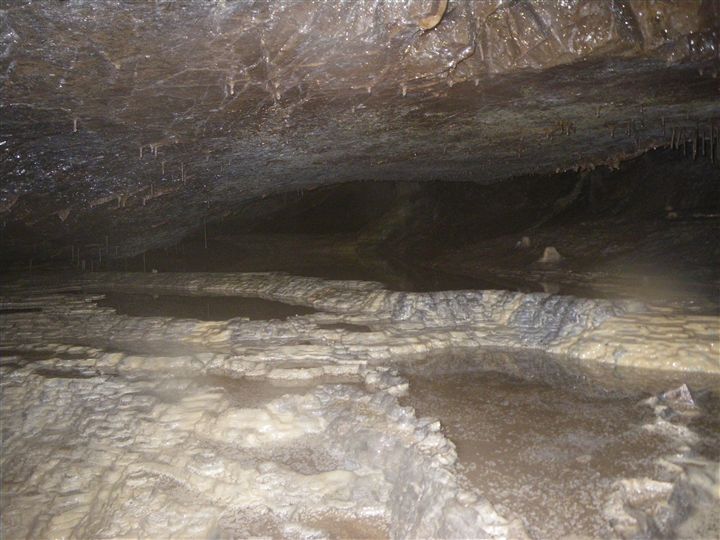 Then we reached Elbow Bend (as far as I’d been before) and onwards through some deep water and stream passage. Then comes The Thrutch – 4m, and not as ominous as it sounds. Shale crawl is yet another wet crawl/canal, leading to Shale Pitch. The book mentions a dodgy rock rebelay to divert out of the water. I duly rigged this and abseiled down to find myself on a ledge, with the only way on down into the water. Had a bit of a look around, and decided I should be hanging off a different dodgy rock on the other side of the water – I should have read the book more carefully! 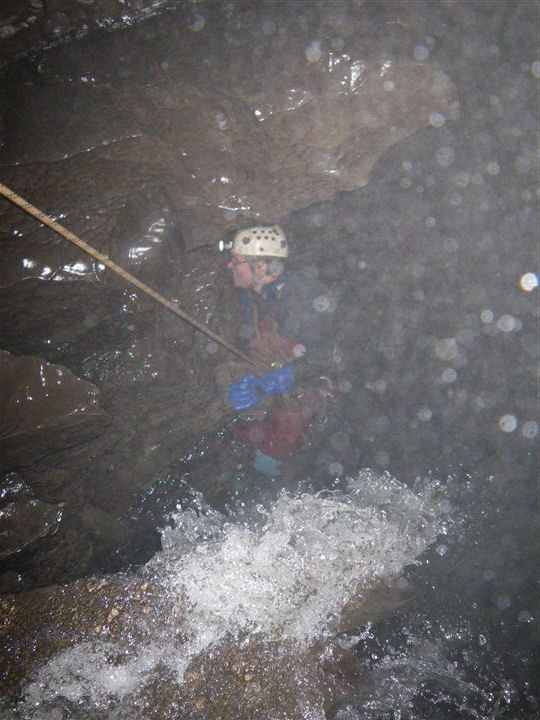 Prusikked back up, and we re-rigged down the unlikely-looking left hand side, and around the corner out of the water – the descent lands neatly between two waterfalls at the bottom. We left our SRT kits and spare gear here.

More streamway, and more crawling, a drop down and a climb up leads to a narrow and awkward sideways crawl out onto Slimy Slit pitch – an easy enough free climb once you’ve extricated your legs.

At the bottom is Sewer Series – with a sump a short distance upstream, and downstream 5 minutes of excellent deep canal leads to another sump. 3½ hours in to this point – not bad – did I mention I had a wedding evening party to get to? On time so far.

It feels quite a long way from home, and it is – looks like about 1¼ miles of caving on the survey (although Northern Caves says 3.6km). We’re both quite cold, and ready to leave.

Back up the canal, up Slimy Slit and through the awkward bit (easier on the return – probably the only part of the cave that is). Climb down and up – here we meet another two cavers, who have apparently used our ropes (since we hadn’t rigged the 1st pitch they’d assumed the ropes on the following pitches were “fixed”). They reversed and exited ahead of us up the streamway, clearing Shale Pitch while we geared up.

Route finding seems more difficult on the return – there are a number of places where you pop out of obscure holes, which seem ok to find on the way in, but we missed our way a few times on the way out.

Don’t know why it is that tackle bags always catch more when you’re tired – I seemed to do a lot of swearing/reversing/unhooking my tackle bag from whichever rock it had looped itself round. Crawl, streamway, crawl some more – Shale Pitch was ok, Cascade was a little awkward to avoid the worst of the water. The squeeze (that we’d avoided on the way in) was ok – each landmark was one step closer to the entrance. The 1st pitch bypass was a bit strenuous to do tired, but the Bradford crawl wasn’t as unpleasant as expected – and then finally fresh air and daylight, and a mile walk back via the farm to the cars. 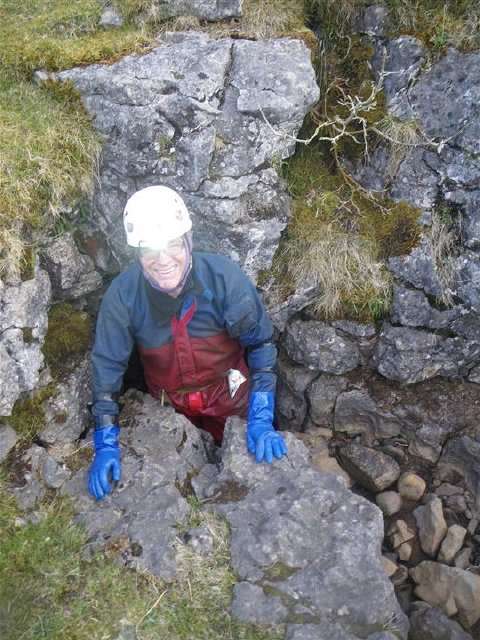 It’s a fabulous day’s caving, and a long long way – 4½ hours out, making me about an hour late. Home to quite grumpy family, rapid shower & change, then wait another 30 minutes for my daughter to finish getting ready. Apparently it was all my fault though, because I was late, and it wasn’t worth her getting ready when I wasn’t even home!