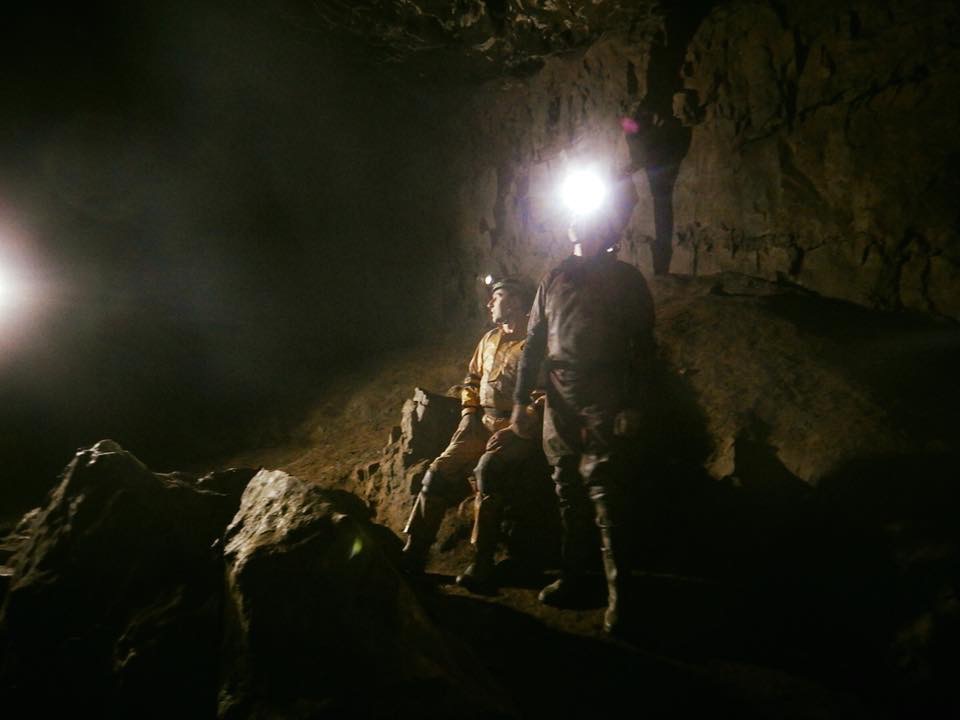 This was Paul's planned trip, so he kindly picked me up from the campsite to meet Mike, Pete & Helen at Inglesport.

The plan for the day was to take advantage of the pre-rigging in Gaping Ghyll, descend via Stream Passage and exit via Flood (Wades); a classic trip suggested by Mike and in Paul's thoughts too.

So usual long walk to the caves was made more fun by assisting Mike in his filming exploits for his new caving video (keep your eyes peeled on the BBC website!), especially on a "take-two" moment of passing the Show Cave! much to the amusement of the tourists.

So entrance into Stream was entertaining only for me it appears, as I demonstrated a true manly faff way of doing the tight passage only to show you how not to do it guys, honest!

Then great descent down through to the bottom of Gaping Ghyll to watch those descending via the winch, which Mike had done the day before; a first viewing for Helen & Pete so it was met by the obligatory "Wow / Ahh" moment.

Then returned to the surface via Flood / Wades, including an awesome 43m prussik. Wow from everyone!

Long day, including all the posing for shots for Mike. I can't say it's pleasant trying to look cool whilst struggling over the top of a tight pitch lit up like "Blackpool Illuminations".

Great fun day guys, thanks to you all!

So if a long day the day before was not enough, myself and Paul went underground again with Gaynor, Zac, Finbar and potential new member Ariana.

This was mine and Gaynor's planned trip to show our nephew the delights of caving, so the plan was to do the classic "County Pot to Wretched Rabbit".

So, after Paul joined us the evening before at the campsite for supper cooked by the gorgeous Gaynor! and a wee little drinkies (only one or maybe two! honest) we met the others at Inglesport Cafe with the usual "spot who is Ariana" moment (need a club flag or something to wave about).

We then all set off for the cave in convoy and then proceeded to the entrance. I went in to rig as a pull through, whilst everyone finished faffing with their gear.

All was going well with Gaynor and I navigating (though I have to admit mostly Gaynor), when we noticed the absence of Paul. SO either the cave monster had finally got him, or we had gone the wrong way :-(  So after back-tracking, we found a reclining and smiling Mr Brooks ....hmmmm!

So on we proceeded up through the slot, always entertaining, and down the next pitch, then onwards to the infamous "Wretched Rabbit".

Having now finally remembered where we were, I led on.

Lots of crawling followed, then the fun dangley ropes to help our ascent outwards, then there was daylight. Whoop, whoop we made it.

So another great day underground guys; thanks to you all! Plus a big welcome to Ariana. I hope we did not scare you off with our mad antics! and Paul for the navigation assistance, though I'm sure we would have remembered the way, by the following Wednesday!

So there ends the Madcap caving weekend. May see some of you midweek over September, if not, hope you have fun.