Over the years we have got sick of being assaulted by rain, hail, snow and high winds at Easter, especially on Raasay. So when the idea of a return trip this Easter was mooted, we avoided eye contact, kept quiet, and made alternative plans!

Head south - that's what birds and old people do in winter, so it would do for us.

We ended up a party of three, that is Westy, Wendy and I. Setting off on Thursday afternoon, along with everyone else trying to avoid the traffic jams, we stopped off at Avon Tyrrell campsite in the New Forest. Planning for an early start to catch the tide, we had set alarms for half past six. This was unnecessary as the bins are emptied at six, which also appears to signal the start of takeoffs and landings at Southampton airport, the planes passing over above the treetops.

We got on the water at Keyhaven, where we could get the car right against the sea wall - we could have been closer, but that would have meant hitting the "4 hour maximum parking" sign. Hurst Castle, built by Henry VIII, and extended in the 1870's sits on the end of a shingle spit which sticks out into the narrow western entrance to The Solent. Once past the spit, we hit the main tidal flow, which was running our direction at about 4 knots and building. A brief stop at a waterside café for a bacon butty, then back on the tidal conveyor belt towards Cowes.

A few people asked why we were going clockwise around the island when most people went anticlockwise. I resisted the urge to suggest it was just northern cussedness - it's all to do with the times of the tides.

We are used to the relative solitude of the west coast of Scotland, so the amount of traffic in the Solent came as a bit of a surprise. There were ferries crossing to the mainland, yachts and motor launches galore, huge tankers and container ships as big as a small African country, heading into Southampton Water - plenty to keep us amused. At first we couldn;t identify the strange smell all along this stretch of coast, then it clicked - money! Camping isn't quite as easy as Scotland either, but we eventually found a site for the tents on top of a four metre high sea wall, next to a collapsed section. We were woken up a couple of times during the night by huge ships passing. Thankfully, we had lifted the boats well above the high water mark, as the wash from the ships would almost certainly have taken them away.

Another early start got us onto the tide stream running with us. Our plan was to get to Bembridge at the eastern point of the island by lunchtime when the tide turned and we would catch the ebbing tide to take us back along the south coast. Again we were kept amused by traffic. This time, we encountered jet boat ferries and hovercraft as well as the usual weekend leisure sailors and sailing school flotillas. Our timing was spot on, and just as we passed under the lifeboat jetty at Bembridge, we picked up the tide accelerating us on our way. We went so fast round the headland that we even failed to spot the harbour entrance. Our lunch spot was under Culver cliff, a large chunk of chalk. This was in stark contrast to what we had passed so far. The whole coast up to this point looked to be collapsing, and we had passed countless landslides.

There was a decent tide race running off the headland of Culver, which got us making good speed as soon as we got back on the water. We were heading for the next crux point for us, St. Catherine's Point. This has quite a reputation, and we knew it could have a tide race up to five or six knots. Ideally, we would camp shortly before the headland, and pass it at slack tide early the next afternoon. The only complication being the state of the coastline, and lack of landing places. We could have paddled it now, but that would have seen us heading along a long stretch of coast with no landing. We had already paddled 40 km, and there was only an hour and a half of daylight left, so it would not have been the wisest plan.

Just before the headland is a little spot called Reeth Bay. We got ashore here, but with no space to camp, we got bivvy bags set out between the fishing boats. A few folk were about, night fishing. One kindly warned us of the rats that lived around the place - nice! There were likely to be commercial fishermen around the boats the next day, and no doubt some visitors, so we didn't fancy waiting around until after lunch to set off and decided to pass the headland with the early tide against us, then pull out as soon as we could find a landing point.

The race was not too bad until the last fifty metres or so, where it started to accelerate, making progress more and more difficult. Luckily we could get off the water very soon, and spent the next five hours reading, watching a pair of peregrine falcons, snoozing and generally chilling out (once we were convinced that the beach was not going to be fully covered before we needed to get back on the water), until the tide turned. Then it was off again towards Freshwater Bay. All along this stretch of coast, there is a lot of erosion. Some buildings seemed to be teetering on the edge of crumbling cliffs. One holiday camp (it actually looked like a collection of chicken huts) seemed precariously close - tip, if you are thinking of buying one, buy one in the second row. It will be cheaper because it doesn't have a sea view, but in a year or two... The sea is really murky along this stretch, with silt coming from the beach. Just before Freshwater Bay, the cliffs turn again to chalk, and the sea becomes crystal clear again.

At Freshwater, we had a decision to make - the weather was good, the sea smooth and the tides right - should we head out for the Needles ? We would be there about seven in the evening, leaving only an hour of daylight to find a campsite. A chap at the inshore lifeboat station told us we could get off the water at Totland, about a mile along the north coast from the Needles. This is on the south side of the narrows and tide race we had crossed heading out to the island. It would be fairly straightforward to paddle this bit as it got dark, provided we kept close to the shore, so with extra snacks, head torches and lightsticks all easily to hand, we set out from Freshwater bay into the setting sun. 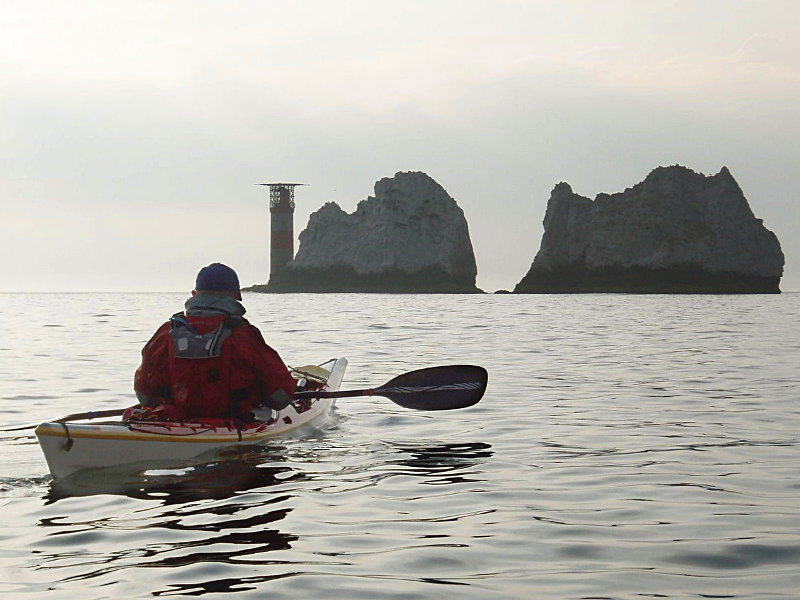 Pete heading for the Needles in dying light.

The Needles are three chalk stacks with a lighthouse at the very end. We were lucky to be there with no other boats around, on a flat calm sea. They are spectacular in themselves, but are much smaller than I had imagined, although the cliffs that overlook them are 300 ft. high. Gawping finished, and with an eye on the time and tide, we headed back east along the north coast towards Totland looking for a campsite. The chap at the IRB clearly has a different idea of a campsite from us. We will, and have, camped on some miniscule and marginal sites, but even with these low standards we couldn't find anything. We knew we could get ashore further along the coast, but some fool (OK, me) pointed out that if we "nipped on back across the tide race - it's only a mile wide", we could camp next to Hurst Castle, and have a leisurely start in the morning instead of being on the water about seven to catch the tide. Suffice it to say, we pulled into the eddy formed against the castle as it was getting dusk. Wendy might expand on this, if asked!

All that remained was a two kilometre pootle back to the car, and the circumnavigation was complete. 100km in just over twenty hours of paddling in three days, made possible by strong tides and good weather. A different but terrific trip.

Additional Notes on weather and tides (choose "Isle of Wight" in the "Trips Elsewhere" drop-down).