We were in Iceland for a week of bottom-wrecking activity on Icelandic ponies, but started off with something a lot more relaxing. Driving up from Reykjavik to Stikkishólmur, we were struck by how green and attractive this west side of Iceland seemed. Once at our destination, we were a little nonplussed to find that every RV and trailer tent in Iceland seemed to be there as well - apparently we had chosen the same weekend as their annual "Danish nights" festival, and the town was packed. Whilst drunken revelling is a prohibitively expensive activity here, we thought it might be better to go back a few miles to a quieter campsite after we had eaten at a café with Black Guillemot breast on the menu.

Next day we met up with Þorsteinn Sigurlaugsson of Seakayakiceland, and were soon packed up into two North Shore Calypso II double sea kayaks - slightly different versions than the club boat with over-the-stern rudders, but nonetheless, refreshingly familiar and much nicer boats than we had managed to hire last time we paddled abroad with the kids.

Stikkishólmur is on the north side of the Snaefellnes peninsula, at the mouth of Breiðafjörður, a large sea loch with very many islands - I think a figure of 4700 was mentioned ! Some of these islands almost block the entrance to a large branch of the loch, and the tide provides some entertaining races hereabouts, although our visit was at neaps, which meant there was nothing very fearsome. 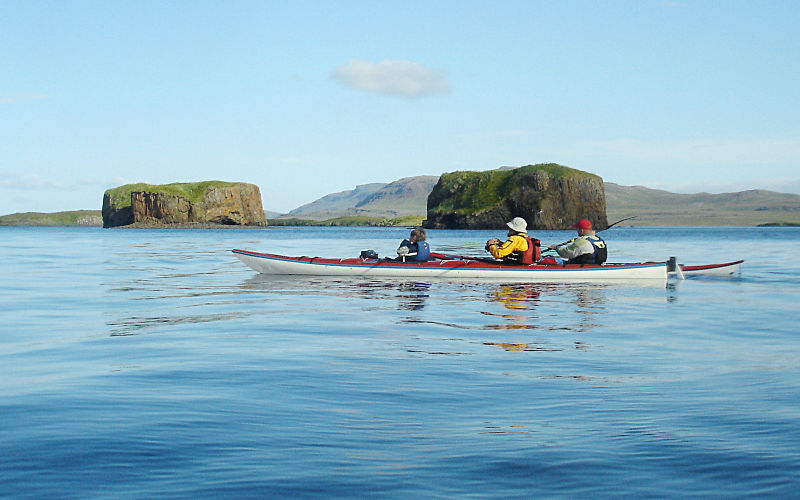 The weather was unexpectedly hot and sunny (having been depressingly wet and windy overnight) and we threaded our way east between various islands towards the archipelago at the entrance to Álftafjörður, where we crossed one narrow tide race, then dropped down through another between two islands into some nice playwaves. Steini was managing to surf one of these, but I had to refrain as I noticed that Michael's spraydeck had popped loose (he was asleep by now) in the forward cockpit, and water from the first big wave had sloshed inboard. We broke out left and through a narrow channel to land for a late lunch (or afternoon tea?) of spaghetti bolognese. Miracles will never cease ! Both children were by now hungry enough to eat heartily. A wander around revealed islands on every hand, all of them topped with a luxuriant flora of herbs and forbs - mostly now in seed, but quite a few still in flower including many familiar from home, where they had flowered much earlier.

At high slack we put back on and headed for a group of small islands made of columnar grey basalt richly decorated with orange lichen. A curious seal was quite approachable here. Now the tide started to move west, and we had a leisurely paddle past Seley, one of the larger islands. Here in a little inlet were hundreds of small jellyfish and a smaller number of comb jellies, thrashing their luminescent cilia in lines. Needless to say, this spectacle entertained the children for some time before we managed to make our way towards Fagurey and Heimaey, another of the larger islands where we were to camp. As we paddled up the east side, a large bird launched from above a small cliff, followed by a second. My first thought was "Heron" but they were soon very obviously White-tailed Eagles, who had had a nest on this island earlier in the year.

Beyond the line of cliffs, we found a weedy landing and a small campsite with a view west and south towards Stikkishólmur, and a climb up to the island's highest point revealed a view of the many islands, with the tide now clearly racing between them. We could now see why Steini's boat had been so heavy as he unloaded a great bag of charcoal and a jug of kerosene to start a major barbecue. Not quite the same as your typical Scottish storm-beach bonfire, but it did burn all evening without further attention. The by now mirror-calm sea was disturbed in places by feeding shoals of fish, but they disappeared sharply when, close to midnight, we were reminded of the festival by a large and loud firework display. 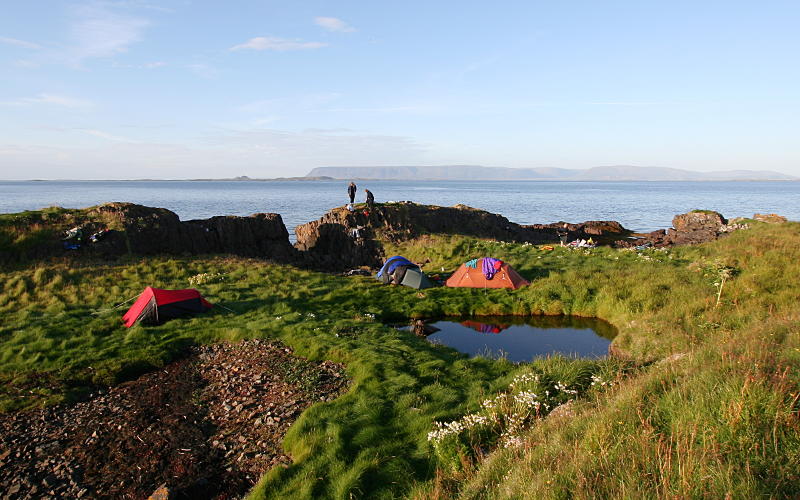 The second day saw a continuation of the improbable weather, as we toured another set of islands, this time finding various seabirds so fearless that you had to bonk them with a paddle before they would get out of the way of the boat. On Þòrishólmi we saw a great cleft in the cliff in which was jammed a large boulder made of material from the mountains several kilometres inland. Not, as you might expect, a glacial erratic, but thrown there by a Troll trying to hit a church bell to save herself from being turned to stone by encroaching daylight. Well, that was the story Steini told us ... 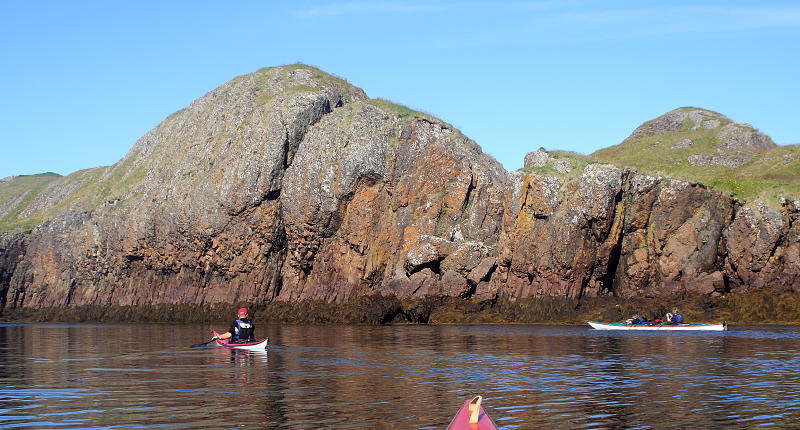 We had lunch on the island, on a tiny sun-drenched beach so tropical that Michael found a swim just too tempting. It didn't last long - well, this is almost the arctic ! From here we returned across the tide to Stikkishólmur and the drive back to Reykjavik prior to our other games. Many thanks to Steini for taking on two unknown paddlers with their kids in an excellent paddling location.

Paddling across the tide on the final crossing back to Stikkishólmur

Additional Notes (temporarily hosted off-site until we can complete the migration to the new website format).