War and Peace (or, A Tale of Two Bothies)

This is a strange tale of two sea kayak trips on the west coast of Scotland undertaken this year by Sue and I, and a friend of ours, Rick Stanton. This article should more properly be called Peace and War in terms of chronology…

Back in July we went up to Largs, although this trip didn’t start too well when Rick’s car died on the M6 near Tebay. We ended up at the truckstop with three sea kayaks, camping gear etc for three, and Sue’s Mini for transport. After some ingenuity and trimming of gear we managed to squeeze 3 boats on the roof, and us and the gear inside. We had to take it in turns to breathe, and the fuel economy dropped to that of a 38 ton truck, but we were at least on the way again. We camped the night just outside Largs and set off in the morning, making the crossing from the marina at Fairlie to Great Cumbrae in calm sunshine and set off on an anti-clockwise trip around the island, dodging the Calmac ferry on the way. 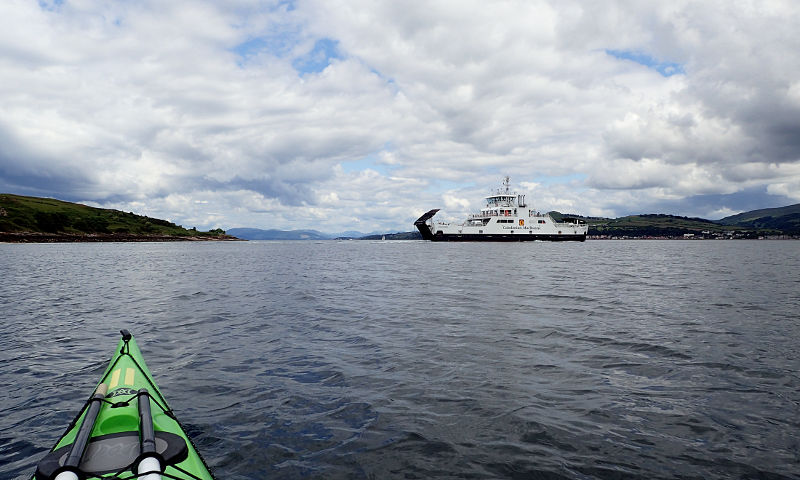 It’s a pleasant and varied paddle of about 16 km the long way round to Millport, the island’s only town. The sea conditions on the west side of the island were a little rougher, and rounding Portchur Point, the south westerly extent of Great Cumbrae was a little bouncy, but nothing outrageous.

We parked the boats in the tiny harbour and sat in the sun outside the pub for a swift one before setting off to cross The Tan, the kilometre or so of open water separating Great and Little Cumbrae islands. The Tan does have a bit of a reputation for funnelling the weather between the two islands, and sure enough half way across things started to liven up. At one point, I looked towards Sue, a few metres to my right; she was head and shoulders above me and looking like she was concentrating hard! In front of us was a patch of very rough water and we were heading straight into it, but beyond looked much calmer so we turned down wind and ran parallel to the Little Cumbrae shore before nipping into the lee and calmer waters. A bit more excitement than planned, but safely across!

We’d planned to camp on Little Cumbrae which our good friend Google had suggested was okay near the castle, and a pleasant paddle south soon had us in the small bay. 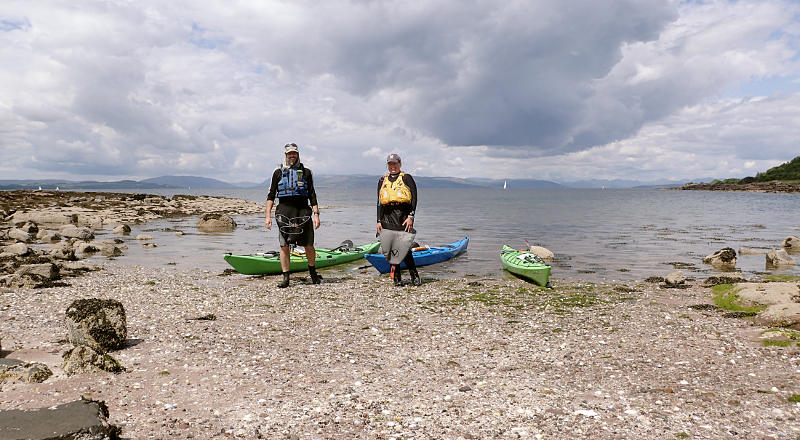 We’d thought the island uninhabited, but a big fast RIB sat moored in the bay, and a large house looked in very good condition with an open front door. I was deputised to go ask permission and was met to be told they’d been watching us come across and to go get the others and come up for a drink. After a quick run back to the beach we returned to find tea and biscuits already outside on a patio table, and a small crowd of folks saying hello. Apart from the guy I first met, all were Asian, which seemed a little unusual for a very small Scottish island. They also spoke what sounded like Dutch or something… It turned out the island is owned by a Hindu meditation group; we were introduced to the owner who produced a big plate of sweetmeats while the rest of his group got into the yoga on the lawn. When asked if we could camp somewhere on the island, his face clouded; there might be a problem. After some thought he told us he couldn’t let us camp… not when he had a spare empty house we could use! We were shown to the slightly run down cottage and were given a guided tour of the big house on the way back to the boats.

Sorting our gear back at the cottage, we all felt that this seemed just too good to be true! Maybe this was some religious cult and we’d never escape… I do feel a bit guilty now at having had such disingenuous thoughts; these were just really nice people. It’s a sad indictment of our society we should react like that.

Next morning we paddled away after copious thankyous; our host told us to let all our friends know paddling visitors are very welcome. A thoughtful paddle up Fairlie Roads (overtaken by the RIB dropping the Belgian party off for their trip home) had us back at the car, and then into a café in Largs for some lunch. As we walked in the door the heavens opened and a gale swept in. Talk about timing!

As autumn slid into winter the three of us had a couple of days to spare but a fairly rubbish forecast so we headed up to Arrochar at the head of Loch Long. I’d done this trip solo earlier in the year and sung its praises and our intention was to drive up, have a late start, and paddle the 10 km or so down the sea loch to Mark Cottage, a bothy on the west coast of the loch. Next day we would get an earlier start and carry on south and into Loch Goil before retracing our steps to Arrochar. The rain held off whilst we unloaded the boats and packed, but once on the water it rained steadily all the way down to Mark. As you paddle south you have to hug the west coast as you pass Glenmallen Jetty; this is a military base where nuclear and conventional weapons are loaded and unloaded from submarines and battleships. There’s an exclusion area and last time I was there a big black RIB came out to investigate me; as all the occupants were heavily armed I was very polite when questioned as to my intentions! Today the jetty was deserted, but I was taking no chances this time. Down at Mark a large oil tanker was discharging at Finnart Ocean Terminal; a deep water berth for supertankers. Apparently a pipeline runs from here to Grangemouth on the east coast where the crude is refined. 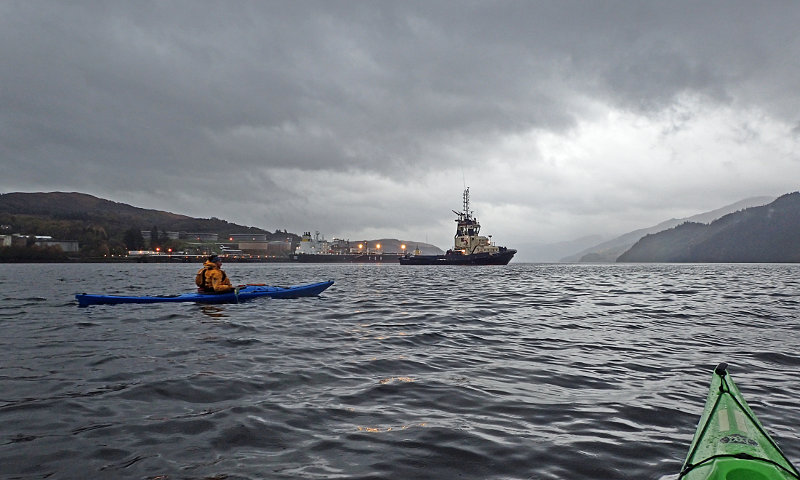 A fire boat / tug was moored on the large buoy; last time here I’d met another paddler who works on the boats; he told me there always has to be a fire watch boat when tankers discharge, although it was close enough that if the tanker went up I suspect they’d go with it! Mark is an odd spot; quite remote in terms of access, yet a few hundred metres across the loch is a huge oil terminal. It’s a lovely little cottage, and by bothy standards quite palatial.

Walking up to the bothy from the beach there was a definite smell of wood smoke; someone was in residence. Entering the cottage we were greeted by a couple of heavily armed military types who said hello in heavily accented English. Military gear was everywhere; what the Hell was this? We are a mile away from a nuclear facility and the house is full of foreign soldiers with radio gear and BIG guns. I was later to comment to a friend that proof that Rick is a cool customer is that after 3 days of constipation (he wasn’t very well) he didn’t sh1t himself on the spot! The residents proved to be friendly enough, although not very talkative and they cleared space for us. The bunkroom contained more soldiers, asleep in bivvy bags. I looked for a spare bedspace and found one, but had to ask my new neighbour if he’d move his gun… 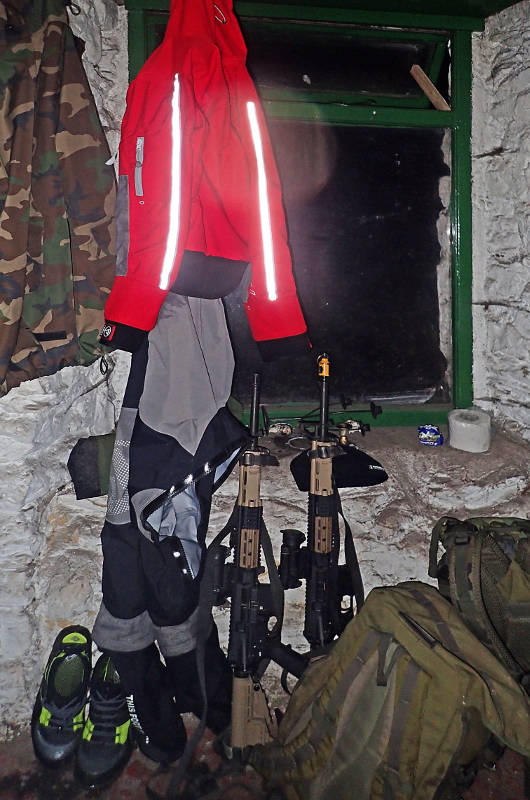 Later in the evening and after lots of radio traffic more soldiers arrived. It transpired they were the Royal Netherlands Marine Corps, on special forces mountain warfare training and at the end of a 10 day escape and evasion exercise. We were warned that their location was known to the ‘hunters’ and there was likely to be an ambush that night. Our reactions ranged from “Oh great” (Rick) to “F***ing smashing” (me). Unbelievably Sue was quiet… I did ask what the chances of me waking up strapped to a chair with a bag on my head being asked awkward questions were, but I was assured I’d be safe. The RNLMC were very well equipped; everything from very Gucci camouflage Jetboil cookers and huge piles of ration packs – which looked far nicer than the UK version – to lots of guns, knives, radios etc. Sleep didn’t come that easily, I have to say. Neither did ablutions; both Sue and Rick were accosted in the bushes, mistaken for the enemy! Being a vegetarian I was left alone; even special forces know when they’ve met their match! Sue was about to put an empty bottle in the rubbish bag when one of the soldiers asked if he could have it. He promptly made a Molotov cocktail and went outside to test it!

Next morning there had been no ambush, but the place was now absolutely stuffed with more marines – I suspect the ambush was called off due to our presence. Everyone said goodbye, including ‘the boss’ who had turned up along the forestry road in a jeep. He had a beard and non-military haircut and the other soldiers were very polite to him, so goodness knows what mob he was from. We were polite to everybody, partly because we’re English, but mainly because everyone else was heavily armed and we weren’t… They were all actually really nice guys, for trained killers. 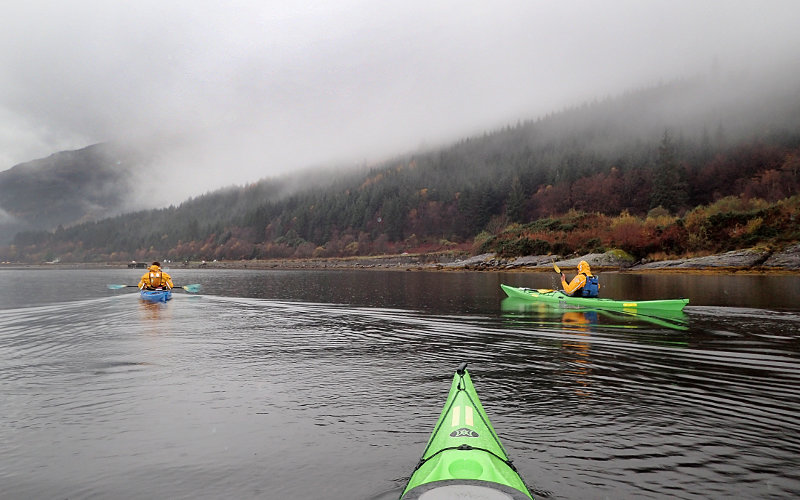 The wind was starting to pick up, so we just ran for home, past the tanker which was now much higher in the water. Surfing along with the wind at our backs we were accompanied by seals and a pod of porpoises, plus herons, buzzards and oystercatchers. Back at Arrochar we were sat in the chippy getting a post paddle cholesterol hit (theme developing here) when along comes a green jeep containing ‘the boss’. Quietly we slunk away in case it was us he was after (rather than fish and chips for the troops).

On the trips; Sue Ryall, Rick Stanton, and me, Dave Ryall