When you plan a sea trip in mid-July, it is probably not too optimistic to hope for a bit of sun and warmth, with balmy winds, oh, and dry... Let's just say that we were over optimistic.

Lismore sits in the Linn of Lorne, just west of Oban. It's a limestone island, with a history of stone export and lime production, but with that, it has a remote feel. Our plan was to get a fairly early start from Port Appin, head north with the tide, head round to the small island of Shuna, then cross over to Lismore, and as the tide changed, head south down the west coast, hopefully hitting the tide race at the southern end somewhere around slack water, before stopping for the night a short way up the east coast, giving a reasonably short trip back to Port Appin on Sunday.

The first bit went OK, north to Shuna, visiting (well, stopping on the water outside) Castle Stalker on the way. As we rounded the northern tip of the island, a massive bird of prey took off from a tree just in front of us, slowly and majestically flapping away, with an attendant crowd of ten or so seagulls. It displayed a broad white patch on its rump. This was for some the first, and for others by far the clearest, sight of a white tailed sea eagle.

The wind was freshening from the south and the waves reflected from the shore were setting up clapotis which kept the paddling interesting, if wet. This dropped off as we cleared Shuna, but the wind was now setting up a short choppy sea, with occasional breaking waves. Lunch was taken on a sheltered beach on a small island, where we could see the frequency of the breaking waves increasing, as the wind built. We headed out from our shelter, and started to make reasonable progress into the headwind and sea. 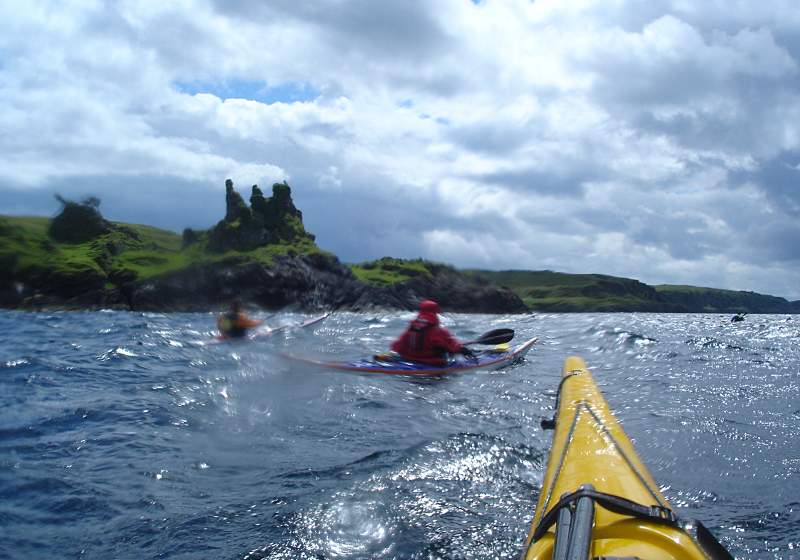 Battling into the headwind

A few intermittent, but heavy, showers sent us into 'hood world' for a while, but weak sun kept appearing to brighten things up a bit. Sadly, the wind would not abate, and we plugged along south. A small ruined quay, quarry and limekilns in a sheltered bay gave us a reason for a break, then it was onwards again into the wind. 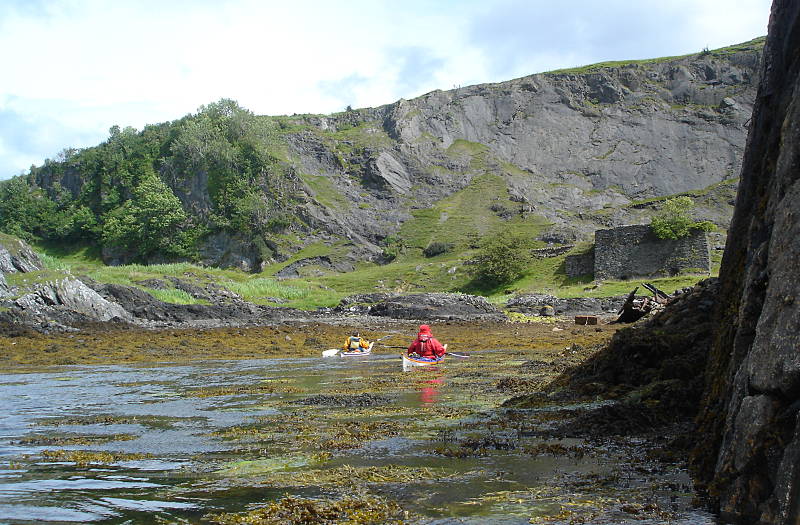 It was fairly clear that we would have a late finish if we were to clear the southern tip of the island before camping. By this time, the wind was knocking us back to about one and a half knots. The last sheltered spot, just north of the island of Bernera, beckoned us for a rest. The next three miles of Lismore offers no landings, so once we set off, we had at least getting on for another two hours of paddling into the wind before we could stop again, so a rest was more than welcome. Once off the water, we quickly decided that it was a fine place to camp, and that, instead of a late finish, we would have an early start.

Andy was on form, gathering wood from afar to make a fire, then reviewing his video. This is a wonderful bit of kit, with sealed boxes containing a video camera, a remote camera on a short pole attached by sucker to the back deck, feeding to it, and a waterproof microphone. A further improvement was planned for Sunday, when a tape to record the video would be introduced. Dinner was followed by wine, chat and bullshit round the fire. Andy's tent marker could not be truly tested due to the lack of willow thickets to get lost within, but the concept certainly appears to have potential. Though, if one is 'tired and emotional' enough to fall asleep in a willow thicket, a small flashing LED may not solve the problem fully.

A forecast from the Coastguard indicated that the wind might drop, so an eight O'clock start on the water was planned. Sunday was certainly calmer, and although there was still a good breeze, we were fresher, so much quicker progress took us down the island, through a gap against a small race, and heading up the east side. 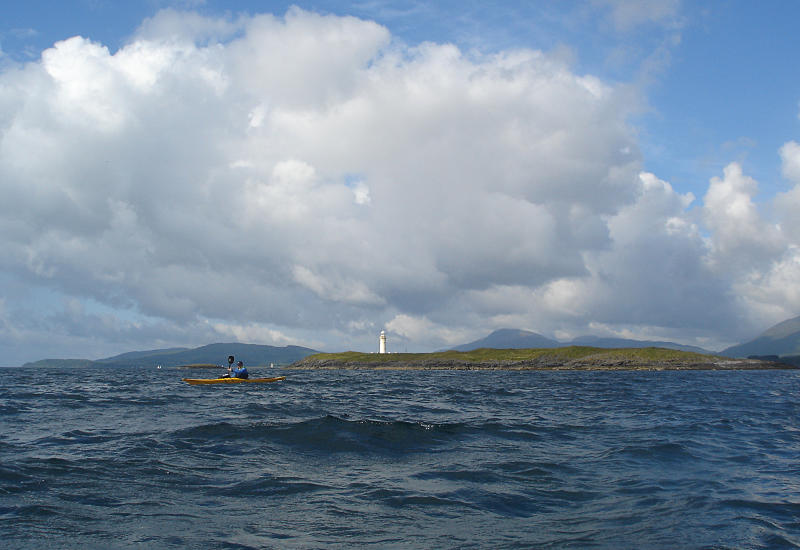 Through the race and on to the east of Lismore

The wind was pushing us along nicely, and a following sea added to our speed, so we made fast progress north. The waves started to build, with occasional breakers coming from behind, which kept us concentrating. 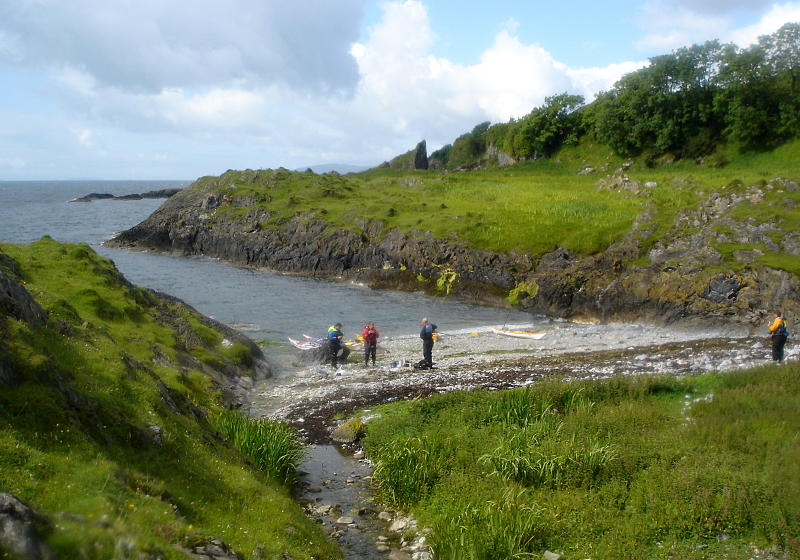 Eventually, we had to cross back to the mainland shore. One option was to head up to the narrowest bit, but this is where the tide is strongest, and by the time we got there, it would be running against us, and the wind, which would cause it to kick up even more, so we decided to cross further south. Turning right, to give us a beam sea, we headed out. Occasional waves would be bigger than others, and some would break next, under or occasionally over us. One wave is still in therapy after it broke under Anna, causing her to resort to a support squawk, a give the wave a severe reprimand. Crossing at this point had the advantage of allowing us to paddle the half mile or so back to Port Appin in shelter and arrive with a modicum of style. 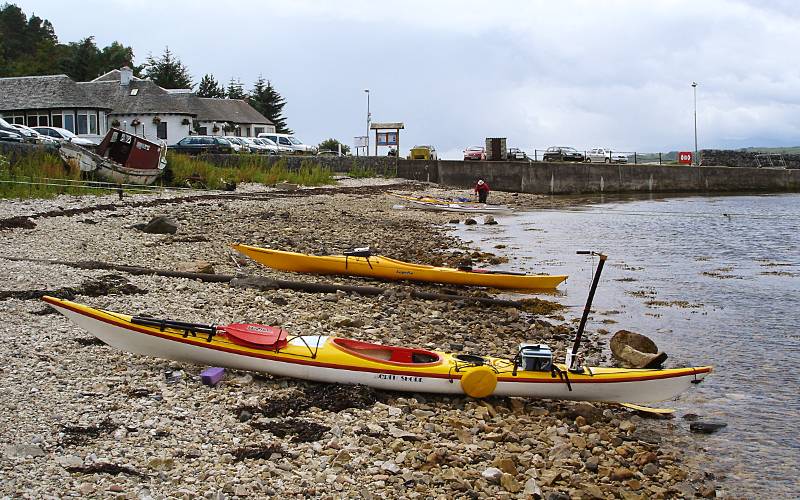 Thanks Terry, Anna, Andy and Wendy for a cracking, if challenging, trip