The water levels for the planned North Wales whitewater weekend had been low, so several people decided that it was too far to go for a lack of rivers. This gave me the opportunity to set off a day early for a pre-booked trip to Scotland, but the avalanche forecast was enough to deter me from any attempt to venture up Munros, whilst inland fresh water was all frozen over, making boating impossible anywhere but on the sea. I'd once rashly promised never to paddle on the sea alone, but in conditions like these there really was no choice...

Disclaimer: Solo kayaking is one of the things that is not recommended by organisations like the BCU, and for good reason. SOC's ethos is that all participants are responsible at all times for any decisions affecting their safety on the trip, including a decision to participate at all. The appearance on this website of any trip reports indicates that the participant(s) made those decisions, but does not constitute an endorsement of those decisions nor indicate that similar decisions would or should be taken by anyone else - the circumstances of every trip are different.

Despite a minor delay to buy a new headtorch the moment Oban Tesco opened, I was loaded up and paddling by ten from the mainland end of the Kerrera ferry, in a flat calm and bright sunshine. Down the sound and round the bottom of the island past the ruin of Gylen Castle, then out to Bach Island. A big grey shape turned out to be a substantial naval vessel heading past Lady's Rock, so I hung about for ten minutes letting this pass before starting the three mile crossing to the mouth of Loch Spelve on Mull where a sandy beach turned out to be a good lunch spot. 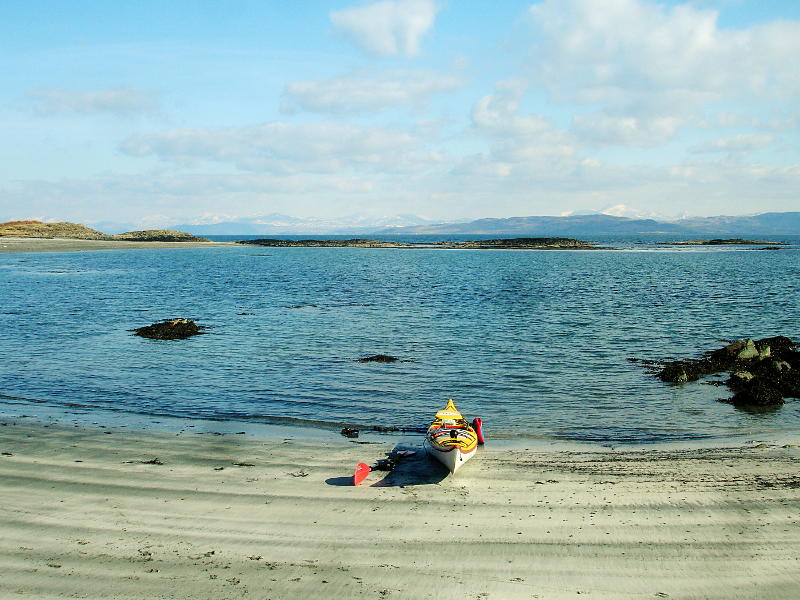 Lunch stop after crossing from Kerrera

The south coast of Mull west from here has few beaches and would be quite committing in anything but the calmest conditions, but with a forecast for a week of windless high pressure and only a very low swell, there were several spots that could have provided a landing. I used just one of these, at Port a'Ghlinne, to stretch my legs, before continuing on past Frank Lockwood's Island (many seals) and round Rubha na Faoilinn. There was still only a foot or so of swell here, and this decreased as I entered Loch Buie, though the approach of dusk meant that I picked the first bay that offered a reasonable landing. This proved to be excellent timing, as the sun dipped below a layer of low cloud that had appeared during the afternoon, providing me with an excellent photo opportunity as the low sun shone on the cliffs and waterfalls, with a backdrop of snowy mountains blue in the skylight. 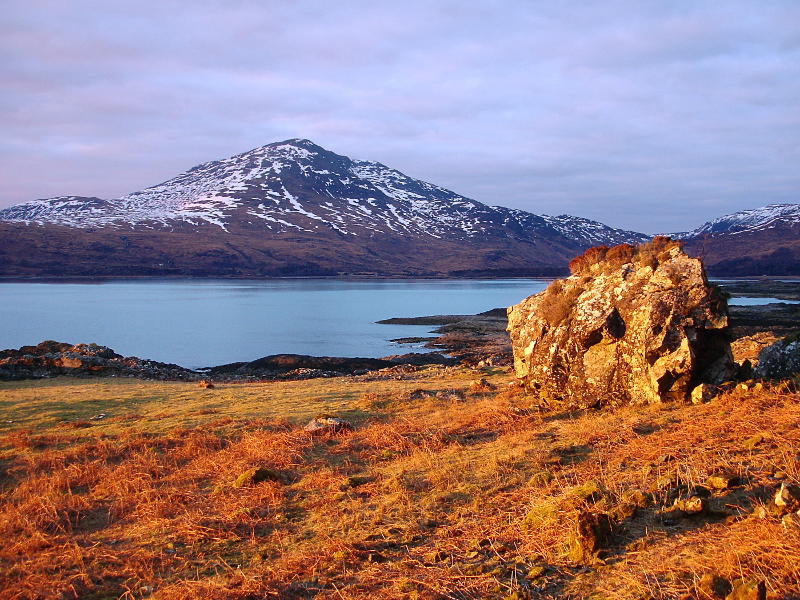 Fantastic lighting for a few minutes at sunset on Loch Buie

A relaxing meal and a fire seemed like a good move after a 21 mile first day. 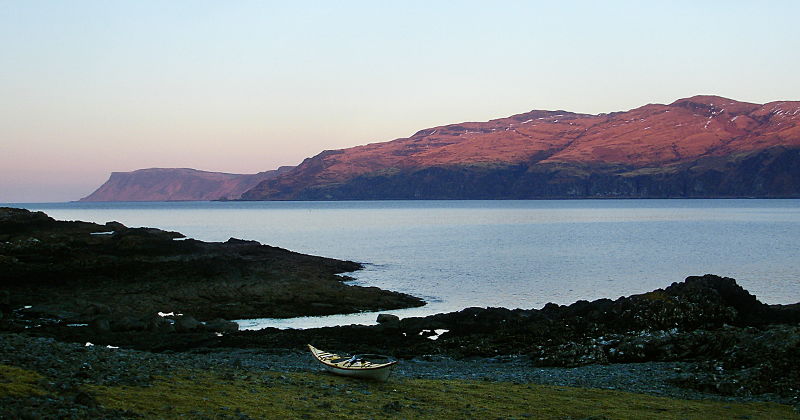 The second day was an early start - but a walk to the head of the Loch was the order of the day before setting off to paddle back after lunch. The conditions were very similar, and the sun was out once again. Ten miles later I was just muttering to myself about the lack of exciting wildlife as I floated quietly past a skerry trying not to disturb two Oystercatchers. This meant that there was no sound when I spotted the furry lump dozing on the rock. Unfortunately, the camera lives in a velcro pocket and opening this made a distinctly unnatural sound. The two otters woke, took a good look at me, and scurried down into the water before I could focus the camera. 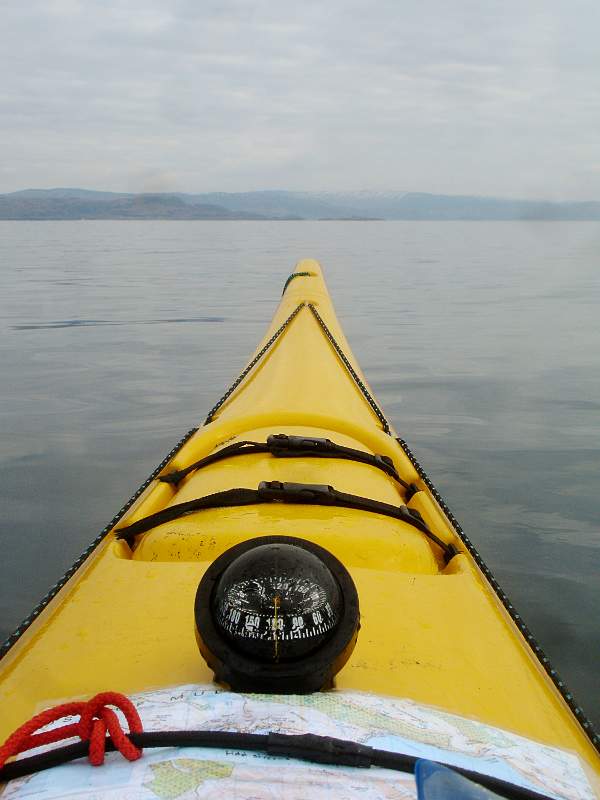 This was just off the same beach where I had lunched yesterday, and was my planned camping spot on what proved to be a much frostier night. Next morning I munched on a bacon butty as I watched a large pod of dolphins making its way down the Firth of Lorn. Another walking expedition preceded my paddle north to Port Donain, where we had camped on a previous trip, and which was the starting spot for the shortest possible crossing back. 4.2 km to Bach Island went in 34 minutes, and a short way later, the coast of Kerrera was reached. I decided that I had time to circumnavigate Kerrera on the return, turning the northernmost point and heading down the Sound back to my starting point just about in time to get the boat emptied into the car in daylight.

Additional notes on weather, tides, and route (choose "Solo to Mull" from the "Trips to Scotland" drop-down).