Travelling up the side of Loch Lomond on Friday evening, we still had 120 miles to drive, so it was dark by the time we arrived on the campsite on the north side of the Mull of Kintyre. Of course, there were no staff at that time of night but fortunately there was another group of paddlers in camper vans and after a lot of jovial banter and crossing of legs etc. they did divulge the secret code for the toilet block.

Others arrived over the next hour or so. It was too late even to think about lighting a fire! Well, just a small beer then.

The previous few days had been very windy. In fact, just here, it had been force 9 which would put most of us off, but this morning it's like a mill pond from the beach and even on the crossing over to the island it's a very calm sea. The Scottish kayaking group had left before us, but in ten minutes they have vanished and pretty soon we are invisible from the campsite, too.

Pete paddling across the mirror-calm Sound of Gigha

Gigha is not a big island and so we could potter about and take our time. There were great numbers of divers and ducks, especially Eider, all paired up and cooing.

Paddling past the northern tip of Gigha

We paddled up the east side of the island watching the mountains of the mainland in the distance and there on the starboard side would be Loch Tarbert. Well, that started the longest discussion ever on place names, but Clive says the place is spelt with ...bert if it separates two sea lochs and ...bet if it's one sea and one .... oh, I've forgotten already. He's right, though - we looked on the map.

By mid-afternoon, we had rounded the northern tip of the island and paddled down to our stopping point at a good-sized beach on the northwest corner. We set up camp and John collected enough firewood for a week. We didn't know the other group would be along to camp nearby later on and I guess they found some wood somewhere! Walking to the top of a nearby hill we could see the water on both sides and trace our day's paddling right across from the mainland.

Camping on Gigha looking back to the mainland

The West side of the island is more rugged, the cliffs quite steep, and the weather a bit blowier with some stiff showers, but when the sun came out it was almost warm. We looked for shelter at lunchtime on Sunday and later in the day after we crossed to the small island of Cara we discussed the options for camping that night. In the end we decided it was too good to miss and stayed there the night. Well, there's something special about an uninhabited island and we didn't know it was haunted at the time. Well, OK then, what was that noise in the night ? 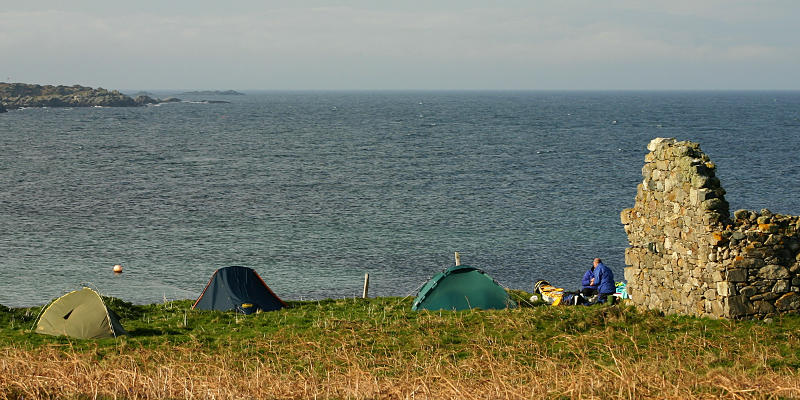 Camping on the north of Cara

Next morning, bright and early, we crossed back to Gigha and paddled up the east side to Ardminish. We had morning coffee/tea/hot chocolate in the hotel garden and then returned across the Sound of Gigha to the campsite at Rhunahaorine Point.

Quite a few of us made the return using the ferries out of Tarbert (between two salt lochs) and then across the Clyde, which was very pleasant and avoided miles of caravans (we supposed) alongside Loch Lomond.