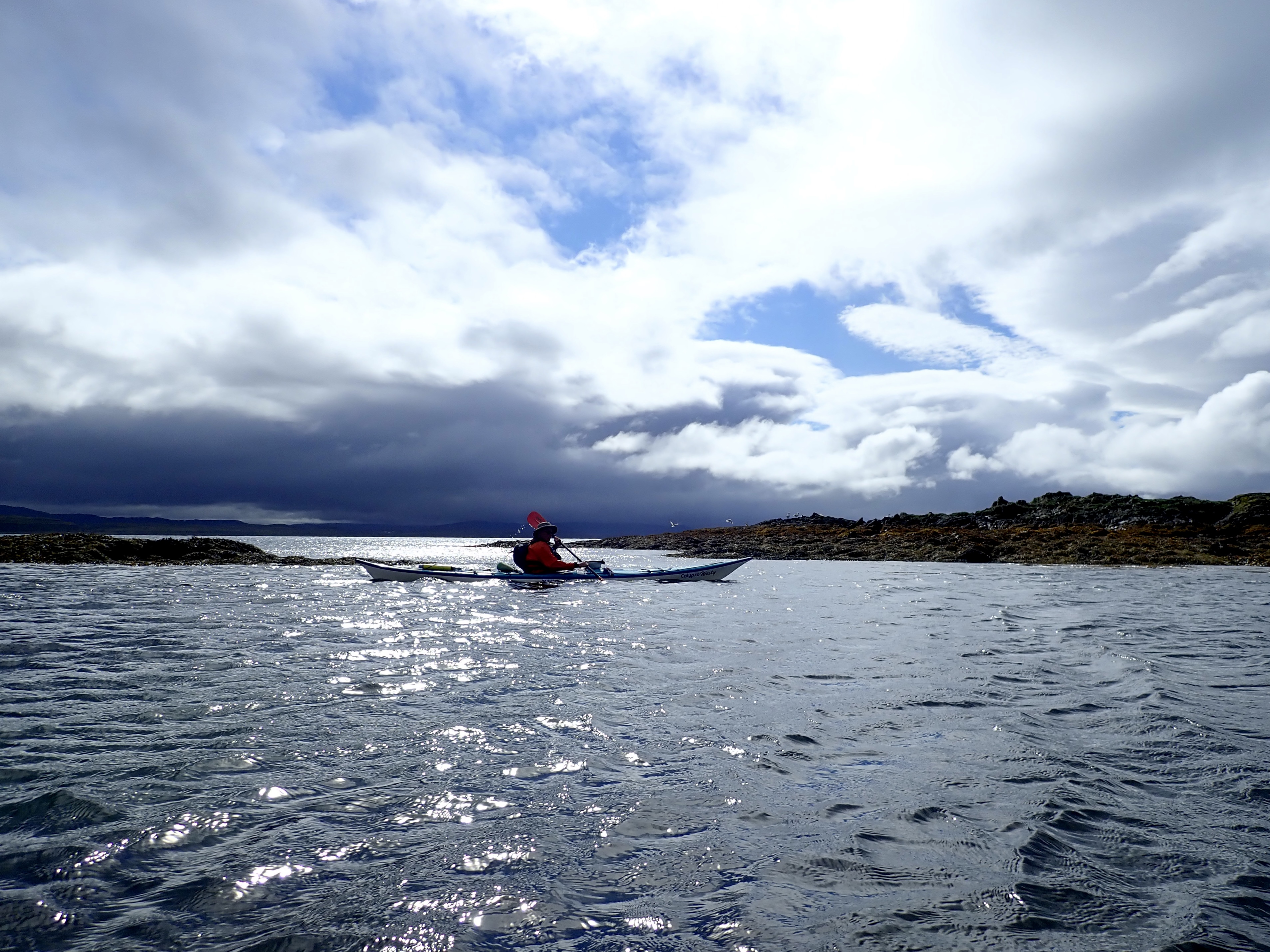 We’re meeting at 9.30 on Saturday at the sea kayakers’ car park Clive wrote in his email as trip organiser. Easier said than done when working until 6pm Friday. Still, my sleep in the back of the car at Arrochar was more comfortable than the following night!

I arrived at 9.15 to find everyone already there. The canoe/kayak section are nothing if not punctual, even after a 6 hour road trip!

Club sea kayak unloaded and packed; it’s fantastic to have club kit available to rent - how would newbies ever become interested otherwise? We set off on placid waters and around the northern tip of the Isle of Scarba. Nevermind I’d forgotten toilet paper, teabags and milk- all were to be borrowed from better equipped colleagues.

We paddled down between Scarba and Luing. The wind was picking up but we were in the lee of it, protected by Luing. However rounding the southern tip we met it head on and it started to get pretty choppy. Up the western side it felt a little rougher but we were making progress

On we went until we found a landing spot opposite ‘Grey Dogs’ for lunch. Envious of those prepared with warm flasks or homemade sandwiches , I tucked into my frankfurters made from mechanically recovered chicken, pork fat and connective tissue - Heron Foods’ finest!

After lunch we continued northwards into ever choppier seas. I was mildly concerned at times and slightly seasick but the kayak felt stable and I only had a couple of ‘wobbles’. We found the shelter of some islands and discovered we had seals, deer and an otter for company. The wind dropped and the paddling was lovely. Other wildlife spotted on the trip included a sea eagle, an assortment of sea birds and a desert storm veteran, though he was hard to spot!

Arms aching and legs cramping we eventually made our wild camping spot in good time at 5pm. The sun even came out!

After a tea I’ll never eat again we gathered around the fire to drink our supplies. Whiskey from limpet shells seemed to be the order of the day and who knew lager cans can disappear in fires?

A fitful sleep followed. Boy did my triceps shoulders and upper back ache, finally relieved by ibuprofen at 5am! Clearly I wasn’t ‘paddle fit’. I was relieved to find I wasn’t alone in aching though.

The next morning we decamped fairly efficiently and rounded the northern tip of Luing into Cuan sound and its tidal race - great fun. I discovered steering straight without my ‘skeg’ was hard work across the mouth of Loch Melfort but before I knew it we were back at the cars and lunch on the jetty. After some communal kayak portage we were loaded up and ready to return.

My thanks to Clive for organising the trip and enthusiastically encouraging me to come. Thanks also to my companions for their bonhomie and for keeping half an eye on me - Ian, Mark, Dave, Kay, Anna, Gareth and Clive. A great trip, thoroughly enjoyed. Now to stretch those back muscles :-)