On the first bank holiday of May, eleven of us (Pete, Wendy, Ellie, John, Nick, Cath, Andy Waddington, Clive, Anna, Dwayne and Anne), went to paddle around Ardnamurchan Point. This was the first trip that John and I had ever done, where all kit was in the boats, this meant that there was a fair amount of faffing before we managed to set off from our campsite at Resipole. As it was Scotland we couldn't believe that the gloriously sunny day would hold out. Much to our amazement, it did.

Me and Dad were in the double so it took a while for us to get our paddling together, I only have two speeds due to my polo - fast or even faster. We paddled across Loch Sunart, in sea that seemed to be made of jellyfish.

We paddled around the back of Carna. It was really pretty, with clear, flat water, and small rocky islands. On one of these islands we encountered a group of seals that were basking in the hot sun. Most of them slinked off into the water as soon as we came near them, but one younger one stayed on the rocky island whilst we all passed it. The older seals kept popping up around our boats as we were paddling - glad I was in a double otherwise I may have fallen in.

After lunch, Dad decided that I should try and learn to steer the double on the way to the campsite. After a lot of zigzagging, as I kept on forgetting that I was steering and was just looking at the views, we crossed back over the loch. The weather had taken a turn for the worse with the wind picking up a little bit and made it a little bit of a damp trip back across the loch. After a very full day of paddling 17 miles, we settled down to camp near Kilchoan. As seems to be the norm for wild camping, a big fire was lit and a (large) bit of alcohol was consumed. 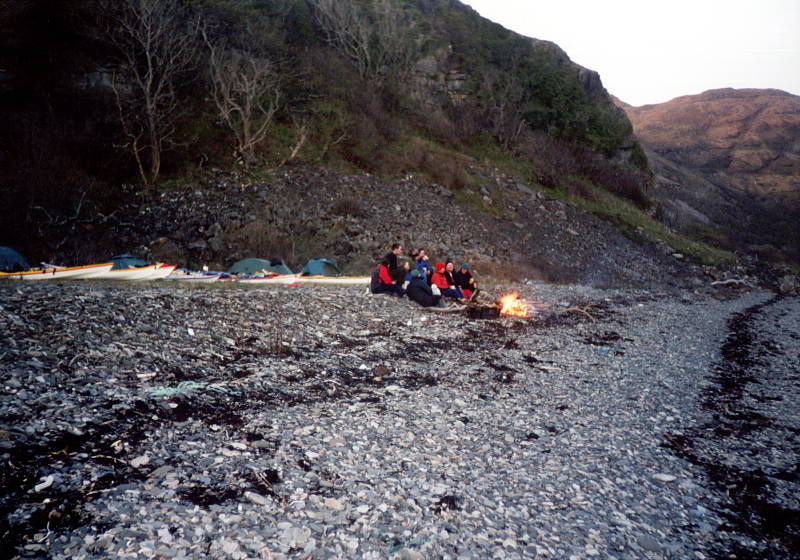 Cheery campfire on the shingle beach east of Kilchoan

The next day we stopped off at Kilchoan harbour to replenish water supplies. As it was so warm we had all drunk more than we expected. We found a small building with showers, toilets and water taps - fairly handy place to remember. We carried on paddling in beautiful weather again. As we entered less sheltered water the swell on the sea increased (didn't it Dwayne!!). 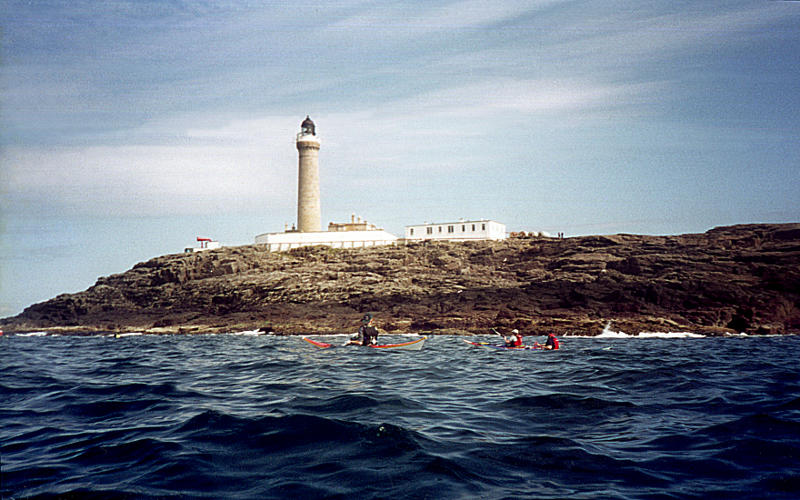 Approaching the lighthouse on Ardnamurchan Point

We paddled around Ardnamurchan Point with amazingly clear views of Eigg, Rhum, Muck and the Cuillin Ridge on Skye. We paddled around some small rocky islands looking for somewhere to have some food and drink and were soon surrounded by lots of seals. They were really curious, but they kept far enough away from us so they felt safe, but followed at a distance. We managed to find a beautiful golden beach to have our food on and a quick nap. The seals that followed us had obviously decided that we were interesting as they kept watching us from the sea. 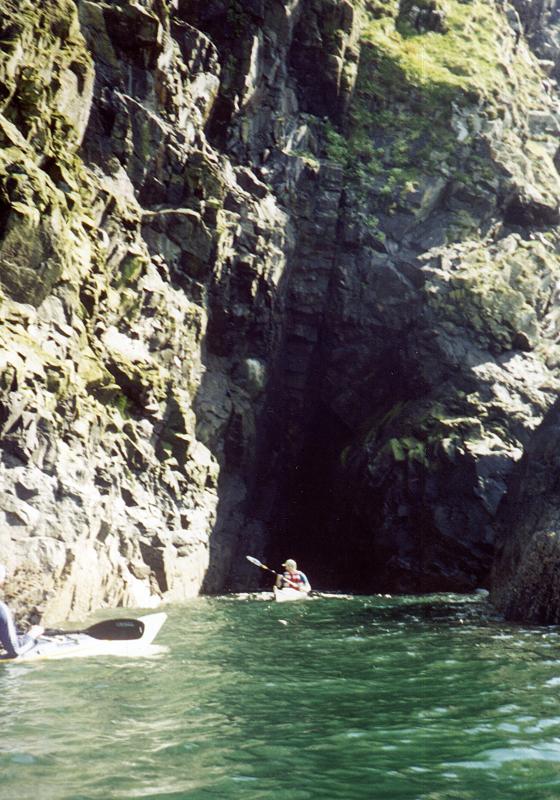 After a quick doze we then carried on paddling. The views to our left of the Inner Hebrides were really clear and kept on changing as we moved along. The coast was slightly different to what it had been like. Clive managed to find a sea cave that was really noisy when the swell hit the rear wall. I was quite reluctant to go in but as it turned out I didn't have much choice as Dad had control of the boat. I did think we were going to get sucked into the cave, as the swell seemed quite big when you were looking out to everyone else.

After searching for a while we found a potential campsite, this took longer than we thought to get to as we had to thread through seaweed-covered rocks, which, as the tide was falling, were getting bigger and slightly more difficult to get through. We landed on a small beach with what looked like a cultivated lawn above it. This "lawn" was easier to put tent pegs in than some campsites I've been to. We lugged the boats out of the water and set up camp.

Once again after the feeding and watering, the ritual of "big fire and alcohol" set in. The night was cold as it had been clear all day, but the stars were really impressive. We spent a while trying to find the seven planets in alignment, we will never know if we were looking at the correct ones. Tiredness set in, after another paddle of 17 miles not surprising really, and we gradually all went to bed. 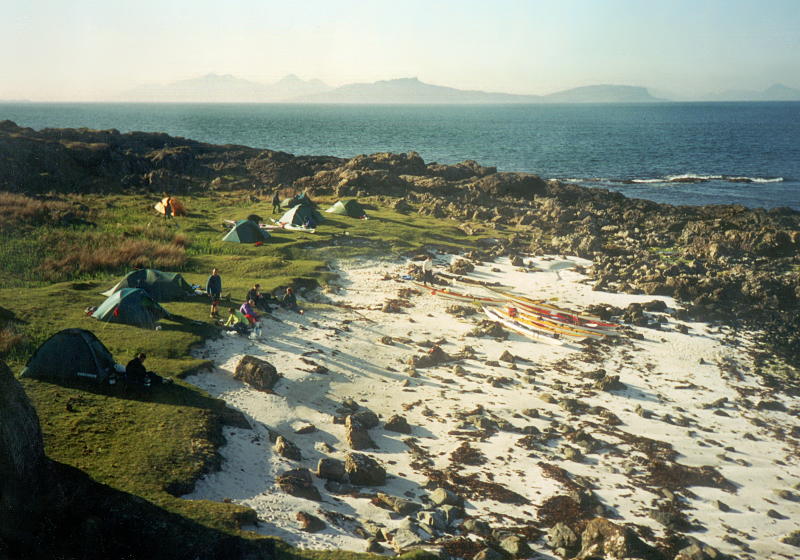 Delightful campsite with views to the Small Isles and Skye

The next day we had been told by someone, not naming names, that the tide would be in when we needed to go, unfortunately the tide was a long way out so we waited a while, until we decided that it would be fun to walk 200m over boulders and rocks covered in seaweed, to put the boats into the sea. When it came to shuffling the double along, it didn't seem to be so much fun any more. That day I decided to paddle Mum's single kayak, I thought it would be worth watching Mum and Dad try to paddle the double together. The waves looked quite big to get out of our little harbour, so with some trepidation I set to get out of the bay. I managed to time it fairly well so the waves were really small when I went through them - much to my relief. This was our last day and we had a shorter paddle, to a place named Ardtoe. It was yet another glorious day again, but the forearms and face were starting to get painful from the amount of sun. More paddling around small islands followed. The sea was, again, fairly flat. 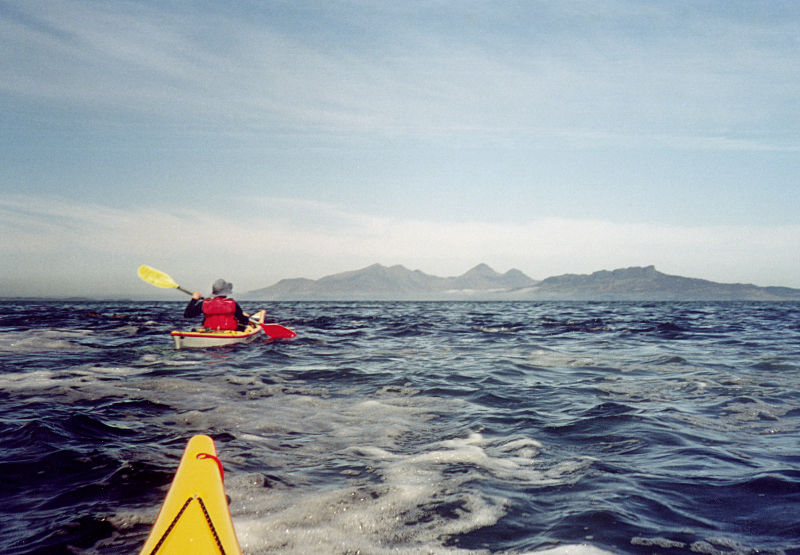 We stopped off for our lunch after winding in-between some smaller rocky islands. With the sun beating down, relatively comfortable beach to sit on and after being active for a few days it was hard to stay awake. One thing that did manage to keep us awake was watching Andy very gracefully (??) fall in after deciding to take a look at the surrounding area. We eventually set off from the little beach and arrived at Ardtoe beach. 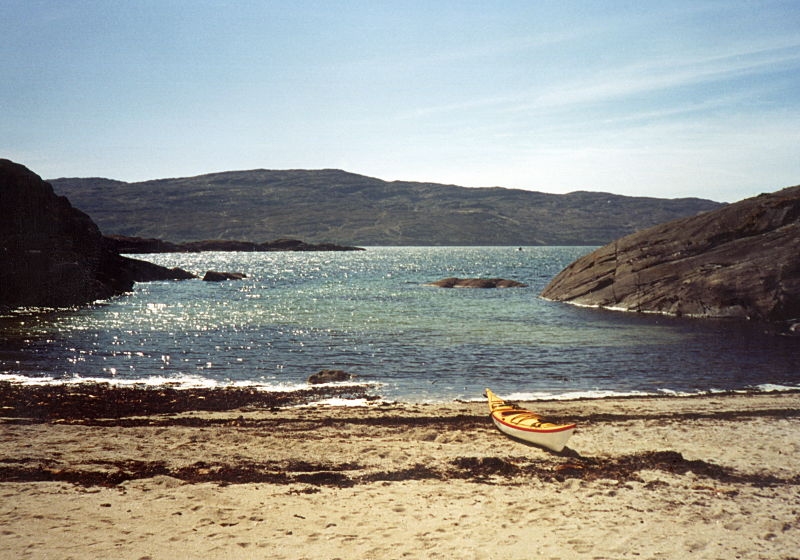 The final landing at Ardtoe, looking back over our last crossing

After a long drive home, John and I arrived back in Leeds after midnight, very tired and sunburnt. Was an excellent first trip for us, couldn't have wished for better weather. Hope it's like that next time.