The North Wales meet was never going to have rivers to paddle in these conditions - most venues are too low a day after the rain stops, let alone two months ! The somewhat radical solution to this was to transform the weekend into a Sea Paddling trip, visiting the tide races around Anglesey. Saturday started at Trearddur Bay, having closely examined a lot of interesting small roads in Holyhead before finding the place to drop Neil's car. Paddling out of the sheltered bay, we found a low swell, but no wind, and temperatures a bit higher than we had expected - all looking good for Tom's first outing in a sea kayak.

The tide was running north and we soon found ourselves being whipped along smartly towards some interesting looking waves ahead - Penrhyn Mawr ! There seemed to be quite a big, and often breaking, wave out to seaward, so some of us chose to take the inside passage, where less turbulence was visible from the approach. This proved to be because the breaking waves were hidden from a distance by the significant drop at the start of the rapid ! It was one of those "I think I've changed my mind" moments, but by now it was too late to do anything except try to pick a downstream Vee and paddle forwards. Curling waves from both sides made a planned break-out to the right look unlikely, so we regrouped back in calmer waters some way further north. Neil, meanwhile, was cheerfully surfing the breaking wave in Mum's sea boat - a bit different from his usual plastic playboat, precluding potential pop-outs ...

Two of the seven duly elected to take the outside of South Stack whilst the others said "What the hell" and headed under the bridge, which proved tamer than expected. The tide continued to help us along, apart from one point where we rounded a promontory to find ourselves paddling hard against an eddy. A lunch stop at Soldier's Point was where we lost Neil (he had to go to "beautify" himself for the Bangor Uni. Canoe Club dinner that night) and also Ann, who had been persuaded that with half the tread of one tyre hanging off, she might be better to get some new ones to avoid walking back home. 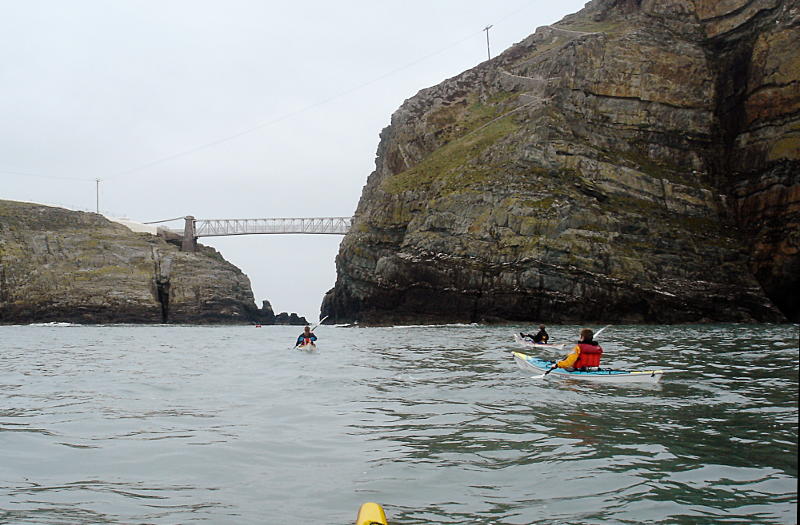 The tide having now turned, the five remaining were effortlessly propelled back down the coast, round the outside of South Stack and southwards back towards the start. Speeds of up to 12 km/h took very little effort but it was a mistake to get too close to the shore and into the eddy - doing so briefly, I saw everyone else suddenly shoot off ahead. Trearddur Bay now contained a little surf, but the surf also contained some sharp pointy rocks, somewhat alarming when finding oneself heading sideways towards them at some speed. It's amazing how much energy is to be found in tired arms (we had paddled fifteen miles) when adrenalin is provided. 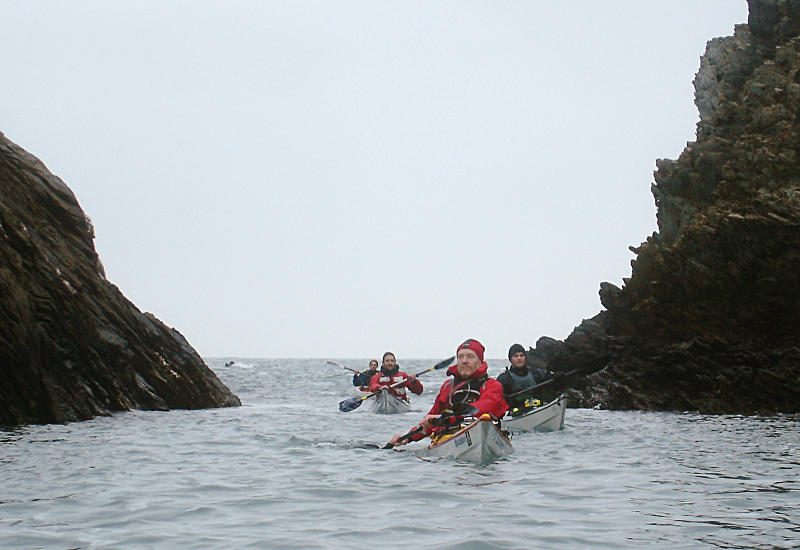 Paddling in to Trearddur Bay through skerries

On Sunday, we were without Neil, but Pete Ball had appeared, to maintain numbers. This time, a one-way trip making use of the tidal conveyor belt meant dropping Tom's car at the beach just west of Point Lynas, before putting in at Cemlyn from the (free) NT carpark at the east end of the shingle bar. We then paddled past the steel superstructure of a jetty at Wylfa power station. Getting close enough to this (about 25m) to read the sign on the end, we found that it was telling us not to get nearer than 50m in case we were sucked into the "powerful water intake". Round the next corner, lots of foam and a distinct warming of the water gave away the point where the returning water came over two massive weirs - bigger than most rivers we paddle.

Speeding along the tide, every bay had an eddy line (stay outside to avoid an end to forward progress) and every eddy line had at least a pair of Porpoise hunting. As the rate of knots threatened to have the paddle over before lunch, we pulled into the old brickworks about halfway - a most impressive piece of industrial archæology, with well-preserved kilns and boilers - once a scene of smoking chimneys and busy quays - the only access for arriving coal and departing bricks was by sea. 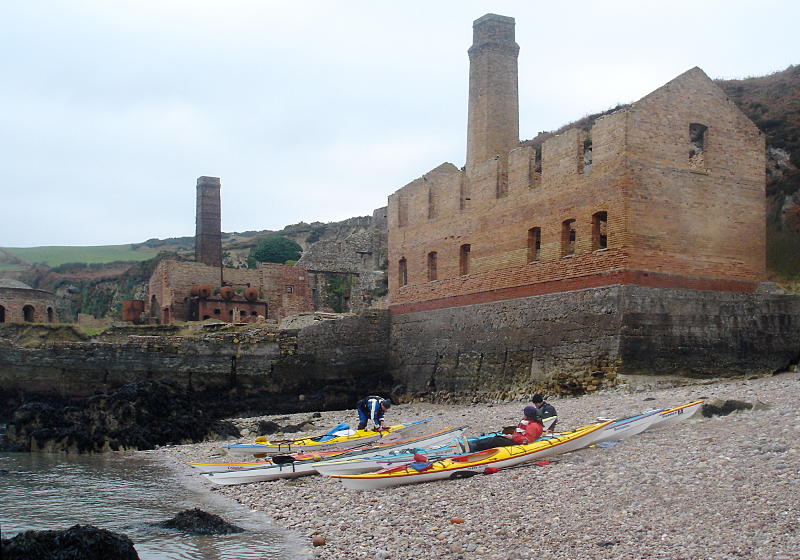 Back on the water, the race between East Mouse and the chemical works at Amlwch proved to be much tamer than last time I was here, possibly owing to the absence of a force five ! We were still making good speed along the coast, despite various pauses for rock-hopping, and all too soon we had to hang a right into the bay and the take-out, where an empty wheelchair on the beach proved to belong to one of several divers whose position was being given away by little domes of bubbles (and floats marked "DIVER" to fend off nasty propellors). 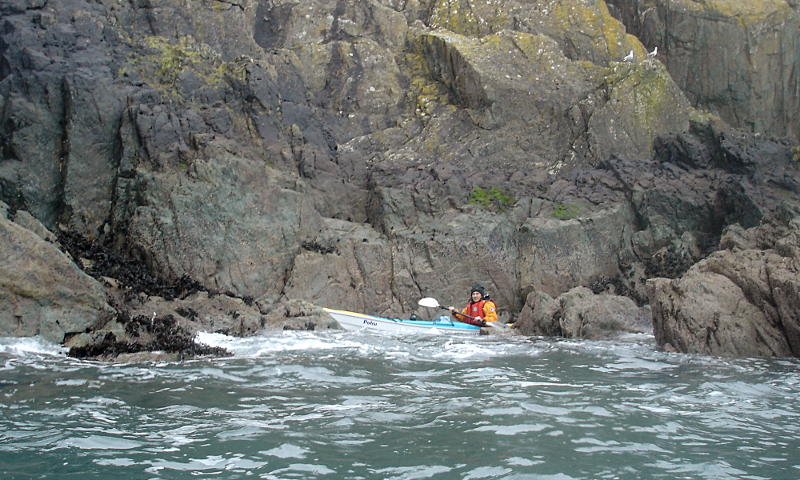