Out and Around Lismore, July 28th 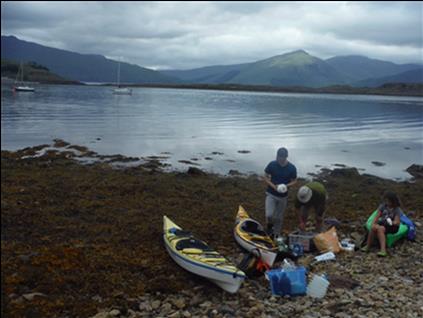 On the 28th July myself and five other fellow canoeists met in Port Appin with the intention to circumnavigate Lismore, which is an island slightly north west of Oban.    After packing our boats in Port Appin, which was heaving with visitors in their crispy clean outdoor gear, we set of across the Lynn of Lorn to Lismore.

The conditions were almost perfect; a slight breeze, which was creating some movement in the water to paddle against.  Due to the flooding tide, there was a good tidal flow through the bits of skerries which made and interesting crossing to Lismore.  We then paddled down through the various skerries to Glas Dhrium in search of a campsite. We finally found a campsite site around 19:30.  After lifting the boats up, putting up the tents and eating our next concerns were meeting up with David (Westy) and Kay.  They had set off from Stockton around two half hours behind us, the plan was to meet up with them in the area where we were camped.  Eventually we saw the two lone padders heading towards us and arrived at around 20:30.  Isak lit a fire, we drank a few beers, got bitten by midges and went to bed.

The plan next day was to be on the water at the latest by 10.00am or whenever we were ready without a great rush.  Despite the jelly fish, this resulted being on the water, and paddling by around 9.10am.  Again, we had almost perfect conditions: a slight wind, sunshine and going with the tide.  We seemed to fly down to Grogan Dubha, which is an old limestone quarry township, here we decided to have a second breakfast sat in the sun! Yet more Jelly Fish 132 counted also seals, sea eagle and an otter.

We pushed on, the plan was to have lunch around Berna Bay and then paddle down to the lighthouse at the bottom end of Lismore and camp for the night.  We had yet another easy trip down to Berna Bay arriving at around 1.30pm.  Whilst sat in the sun (yet again) we were aware the wind was picking up slightly and a couple of the yachts in the bay were moving out.  After lunch we headed from Berna Island across to Lismore.  It was around 5km down to the light house and the nearer we got the more the wind increased.  It was evident we had lost the shelter of the Morvern coastline plus the wind had picked up throughout the afternoon and was blasting straight down the Sound of Mull.  I was in our double sea kayak with my daughter in the front and although the chap in the shop said “don’t take it in any rough water”; the boat was actually handling well and just rolled over everything and kept its course.

I was also a little concerned about Isak who had buddied up with Westy and both were paddling strongly.  The closer we got to the lighthouse the more confused the water got, a combination of the wind, rocky coastline and flooding tied.  As we pulled into the end of the island, we suddenly realised the tied was pushing at quite a rate of knots through the skerries between us and the light house and the wind was still constantly there.  We eventually arrived at the lighthouse slipway and went up to explore.  There were well mown lawns and paths and over all someone was taking great care to look after it.

We decided not to camp, far too posh, and headed back to Lismore, while the going was still good.  Eventually we found a good campsite after around 3km – put the tents up – had tea – lit a fire – drank some beer – all agreed we were very tired – into to bed for 9.00pm.

I think we all got up slightly bleary eyed, fortunately the wind was still blowing and keeping the midges away.  After breakfast and a bit of chitchat, again we were on the water and paddling for around 0910.  The plan was to head up towards the ferry port Achnacroish, for lunch and then try and have a short afternoon, find some where to camp, leaving a short paddle back to the cars on Sunday.

Heading up the coast we had the wind on our backs and the tide with us until around 11.00.  We made steady progress and after a second breakfast stop, we made Achnacroish by 13:30 for lunch.  From here it was 7.5km up to the end of the island.  Given the time we decided we would push on to the end of the island and camp on Elean nan Caorach which would leave us a short crossing back to the cars in the morning.  By the time we got to the end of the island the wind was blasting through the skerries again and with the addition of the tide it all looked quite intimidating.   After telling Isak to ferry glide across and on no account to stop paddling he and Westy were off again, followed by Penny and Kay.  Again, I had some concerns about our big green double sea kayak due to its quite high volume and windage.  But it was fine, it was quite surprising.

In the morning we did the short crossing back to Port Appin – packed the cars and set off for lunch at the Real Food Café.  Overall an excellent trip.  I was please with our big green sea kayak, its much better than it looks and there’s a plan for next year!