St. Kilda is a group of islands and stacks in the Atlantic, some 55 miles west of Harris in the Outer Hebrides. The islands are steep, rugged, abound in stacks, caves and arches, and are well towards the top of the top five destinations for sea kayaking in the UK. They are particularly hard to get to, which just adds to their appeal. We wanted to go!

The problems start with trying to get there. There are three main options: paddle there, boat ride out and camp, or boat out and live aboard. Of these, the easiest to discount is the paddling option. A few people have done it, but distance, weather and seriousness rule it out as a realistic option. The chance of a boat ride out, taking kayaks, then camping on the islands looks to be a good choice, but there are several drawbacks. There is only a small campsite on the islands, at Village Bay on Hirta the main island of the group. Camping is limited to a maximum of six people for five nights. We had eleven people, so that wouldn't work. Looking at the live-aboard option, I kept coming back to Island Cruising, on MV Cuma. The skipper/owner is Murdo MacDonald, who has run trips to St. Kilda since 1997, and for 30 years before that fished around the islands. He is based at Miabhaig on the west coast of Lewis, about 70 miles NE of St. Kilda. To cut a long story short, that's the option we went for. One of the benefits was that he arranged a guide for us, in the shape of Robert Emmott, a member of Stornoway Canoe Club, who has paddled extensively around the area. He is one of the authors of the sea kayak guidebook to the Western Isles. 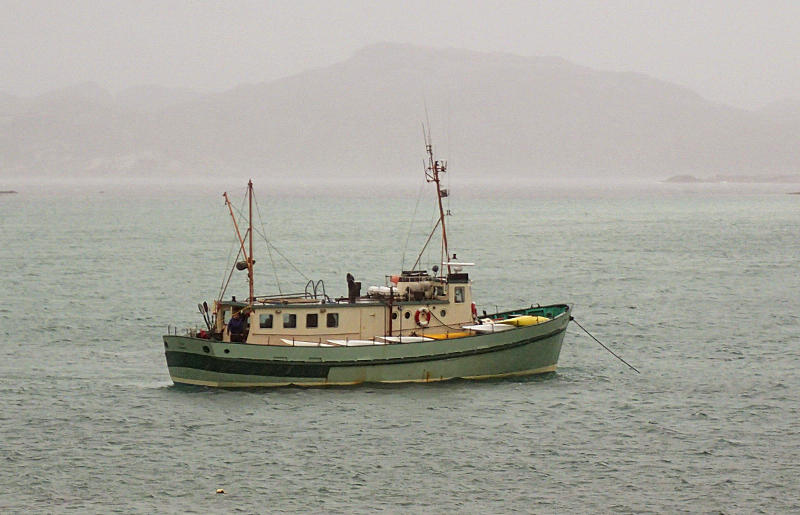 Village Bay on St. Kilda is the only anchorage, but it is open to winds and swell from the south-east – guess where the winds and swell were coming from ? Weather forecasts were most unhelpful, promising winds that at some stage of the following 24 hours would blow from the SE. It quickly became clear that we would be very lucky to get to St. Kilda at all, but this is when we started to reap the benefits of Murdo and Robert's experience. They took us to places on the west coast of Lewis to make the best of the conditions. We were amply supplied with tea and homemade cakes by Michaela (Murdo's granddaughter) and Nicola (her friend), who, together with Murdo, form the crew. They also prepare and serve all the meals and make the packed lunches.

Saturday saw us move to Scarp, and a sheltered anchorage in the lee of Cearstaigh. An evening paddle featured some rough water, caves and waterfalls where streams were running off the cliffs in the heavy rain, followed by dinner on the boat.

Sunday, weather not good enough for run to St. Kilda, so south to Huisinish, where we paddled to Abhainn Suidhe (Avun-soo-ee) Castle for lunch (sounds grand, but it was only packed lunch on the beach), watched salmon in the Abhainn (river) Suidhe, then paddled on to meet Cuma east of Taransay. This was followed by an excellent Sunday roast dinner and an attempt to reduce the mountain of wine and beer we had brought aboard. 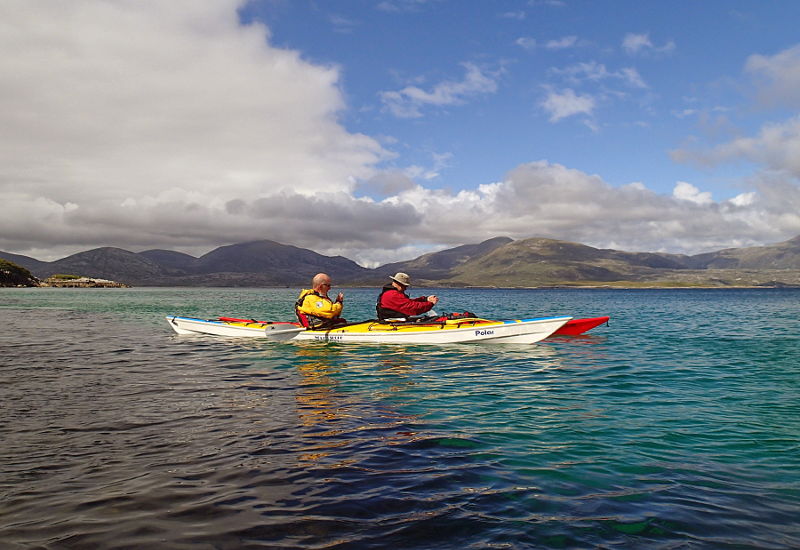 Monday, wet and windy, we motored to Loch Reasort, then late afternoon when weather had moderated, we paddled to the head of the loch where a small river ran out. This formed a small rapid, so much fun was had trying to surf the waves. Wendy and I managed a respectable performance in the double. Andy went one better, carrying his sea boat up the moor to run the last 100 metres of the rapid on the river itself. Beating into a head wind back to Cuma just got us ready for the evening dinner which was soon served for us, and a resumption of the attack on the alcohol cargo (have you noticed a pattern forming yet?). 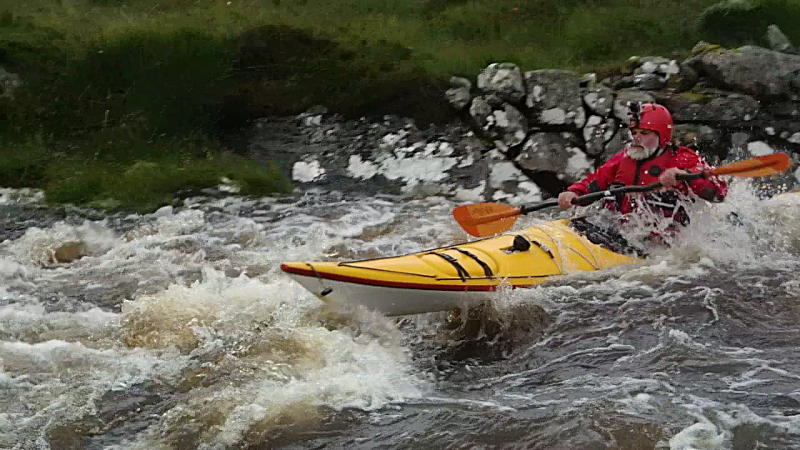 Probably not a first descent, but not a river on the tip of everyone's tongue - Abhainn Thabhsaigh

Tuesday, it had been squally overnight, and yet again the shipping forecast was promising SE winds, ruling out St. Kilda. We had a lively ride as we headed back north to Loch Roag, a large and complex sea loch east of Gallan Head. 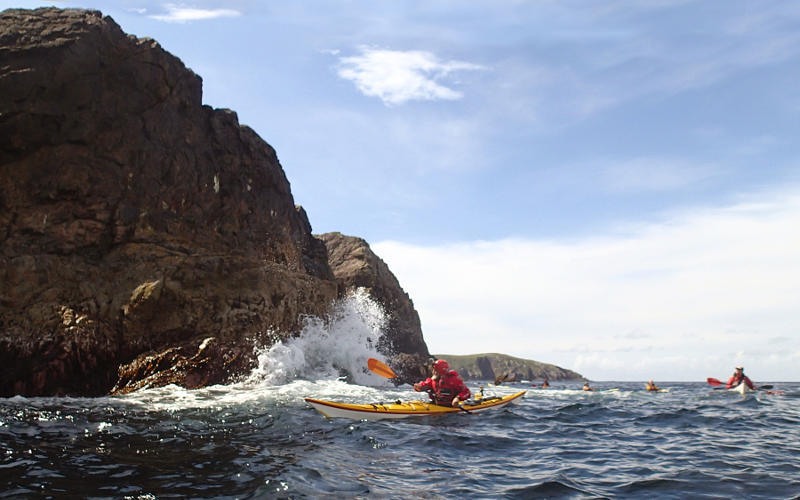 Even in the shelter of Gallan Head, there were some fun waves to play in

Cuma dropped us off just south of Gallan Head, and we paddled to Pabaigh. My diary sums it up nicely "absolutely fab trip - caves, arches, rocks, swell, flat bits, clapotis, wind all present at various times and in various combinations". Cuma was anchored south of Pabaigh Mor, so back on board and shower, dinner etc. once more. 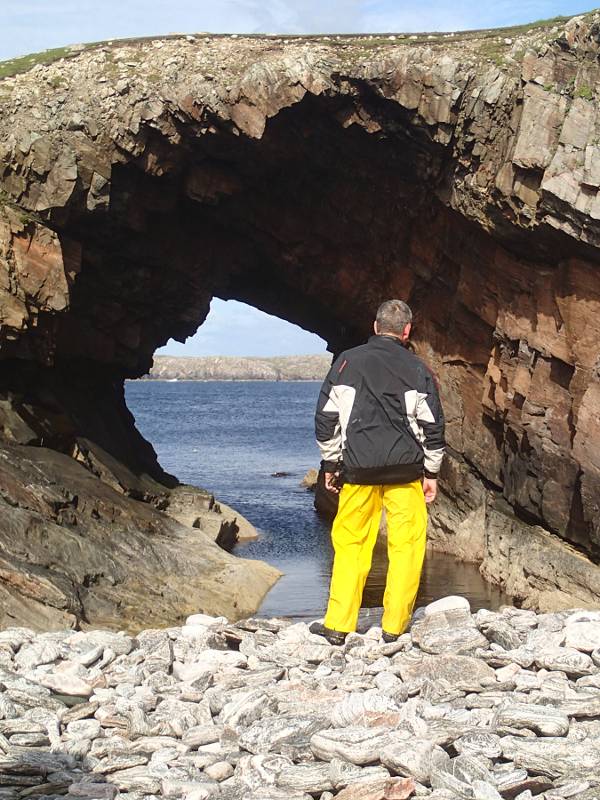 Wednesday started again with breakfast on the boat, but with a forecast of F6 to F8 winds later in the day, we grabbed a paddle in the morning. Murdo dropped us off near Fuaigh Mor, arranging to meet us for lunch at a beach called Bostadh. Robert took us to visit a small sea loch, Tob Bhalasaigh. This is a beautiful quiet area – not that any of the area is crowded or noisy – with the added advantage of a tidal rapid where the loch drains out under a bridge. This gave us an hour or so of fun playing on the waves and eddy lines, before heading along the coast to meet up with lunch, sorry, boat. Robert and John W went for a paddle after lunch. Johnny went for his second swim of the trip (a proper one, that is, not one of those falling out a kayak, technical swims). This time, not only was he wearing a wetsuit, but learning from the first time, special anti-jellyfish socks. The rest of us variously slept, wrote diaries, played with cameras and videos, uploaded photos or/and drank tea and ate cake. 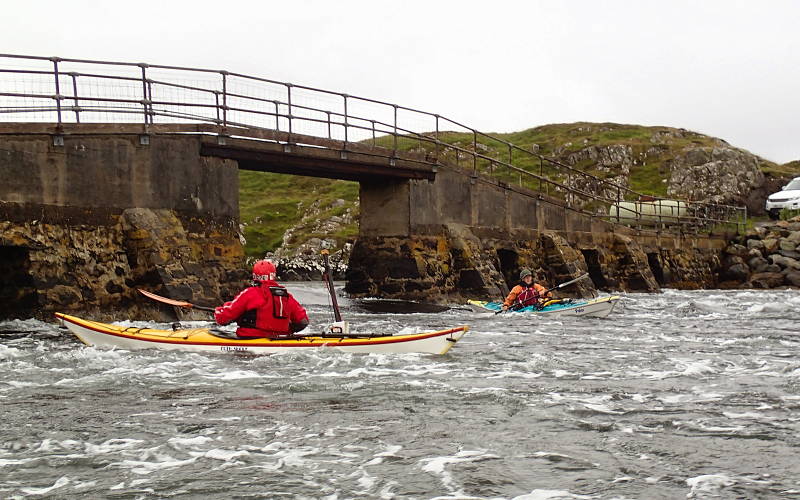 The tide pouring out under the bridge at Bhalasaigh gave endless scope for high crosses.

We stayed in the anchorage overnight and from there paddled out on Thursday round the islands North of Bearnaraigh Mor (Great Bernera), and what a paddle – cliffs, arches, caves galore, including a huge arch cum cave through Campaigh. Wendy and Claire had been for a walk on Bearnaraigh Beag (Little Bernera) and we met up with them on a beach for lunch, after which it was a paddle out through more caves and stacks, culminating in circumnavigating Seanna Chnoc (Old Hill), a rocky island open to the full Atlantic swell, and again to quote my diary notes "absolutely fabulous, big caves, swell, clapotis, arches etc. – stunning". 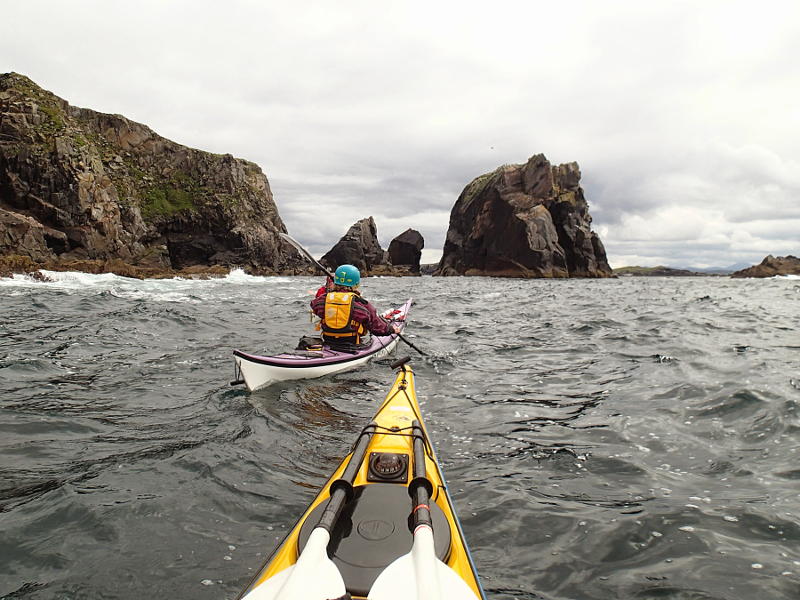 Coming up to Bearasaigh on the return from Seanna Chnoc

Then it was back to the boat for dinner, and a move back to Miabhaigh jetty. Andy and Mary left that evening to try to catch the early ferry on Friday morning, intending to sleep in the queue, not having a booking. Johnny and Claire had a booking so had the luxury of being able to not leave until 4:30 in the morning. The rest of us hadn't got the pressure of trying to catch early ferries, so after breakfast, we had a paddle round the islands near Miabhaig – no wind and not a cloud in the sky!

As for incidents during the week, we had but a few – there was the "I'll just turn round and switch my camera on, ooops" swim, the "Here’s your camera, fumble, drop, I’ll catch it before it hits the water, swim", and the "technical swim", which I seem to remember involves sitting in the gap between your own boat and the dinghy. I'll not put names to these, but you know who you are...

So, we didn't get to St. Kilda, but was the trip a success? – certainly. Will there be a return trip? – very likely. 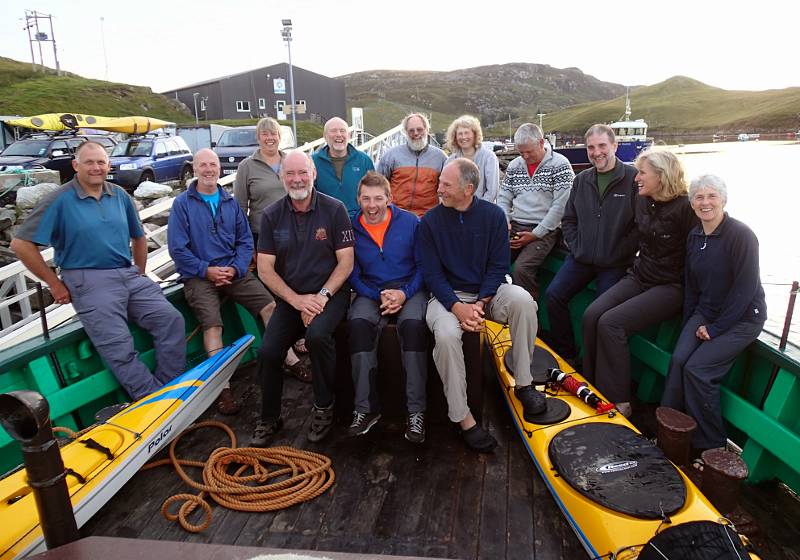