This trip was conceived and organised by Dave and Richard. I just went along for the ride. The idea was to take a long weekend to go up to Scotland and paddle on Mull. It had been a bit touch and go, as the weather in the preceding weather week was very changeable and there was a deep low, bristling with weather fronts in mid-Atlantic, due to hit our area of operations on Monday evening. We eventually decided on Thursday evening that we would take a chance and go for it. The wind was forecast force 3 to 4 all weekend, coming from the SW on Saturday, moving round to N on Sunday and then to SE by Monday, when could also expect some rain.

I met Dave at his house and transferred my sea-kayak and kit to his car. It was already quite windy, and it started to rain heavily before we got to Richard’s place. Having picked up Richard and his kit, we headed North, stopping briefly for fish and chips in Glasgow, and arrived outside Oban at around 1.00am. After wild camping in the car park of the water treatment works, we packed away our wet tents at around 6.30, and headed down to the ferry port to get the 7.30 ferry to Mull. Once embarked, we headed straight for the cafeteria for the full Scottish breakfast (choice of 6 items plus 2 slices of toast with mug of tea or coffee for £5.99). Chatted to 3 other guys with sea-kayaks who were headed for the Treshnish Isles, which I thought was rather brave, in view of the weather forecast.

When we arrived on Mull, we headed for Bunnessan, on the Ross of Mull. The Ross is the long peninsula on the south of Mull, which extends westward, with the island of Iona at its tip. Bunnessan is on the north side of the Ross, at the southern end of a small loch. The rain which had followed us from Teesside stopped as we arrived and the clouds started to clear. We were sheltered from the wind as we packed food, clothes and camping gear into our kayaks and set off northwards. Unfortunately, as we paddled out of the loch and turned westward along the north of the Ross, we found the wind in our faces.  We paddled for around 8km until we reached the Sound of Iona, where the wind strength increased as it funneled from S to N, between Iona and Mull. We tried to keep out of the wind as much as possible by paddling between a group of small islands at the top end of the sound. We were pleased that due to Richard’s planning we had arrived there on the slack and were not fighting the tide as well as the wind.

We had a quick stop for lunch, where Dave spotted a pair of eagles above us. We then continued southwards to the bottom end of the sound, where it was clear the true wind direction was SW as forecast, and there was a significant swell from the same direction. The coastline here was very pretty with many small islands and inlets with sandy beaches, difficult to reach other than by sea. We took what shelter we could from the islands but for much of the time we had the wind and swell on our back quarter. I was really pleased that the adjustments I had made to my seating position earlier in the year seamed to have had the desired effect. Previously conditions like this would have been very difficult for me to handle, but now appeared almost effortless. 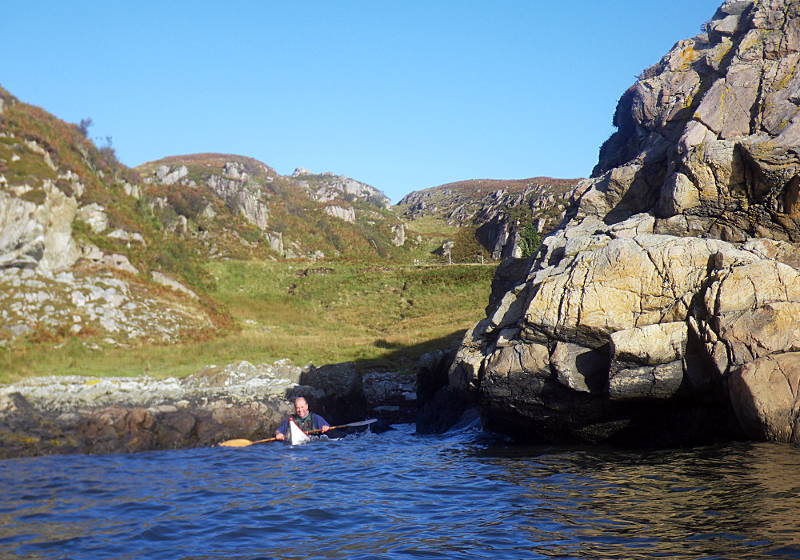 Richard exitting the small gap from the overnight stop

We had been heading towards a large south facing beach for an overnight camp spot, but concern about possible surf, made us opt for a small bay accessed by a small gap in the rocks and a nasty carry over seaweed strewn rocks. We reasoned that getting out in the morning would be easier as the tide would be higher. We found a good place to camp and even found sufficient dry wood for a small fire. Getting out the next day was not quite as easy as expected. Even though the wind had now turned to the north, the southerly swell appeared bigger that the day before and navigating the small channel between the rocks required careful counting to avoid the incoming waves. We were, however, pleased we had not taken the beach option, as an exit from there looked quite exciting, with rather unpleasant-looking surf. 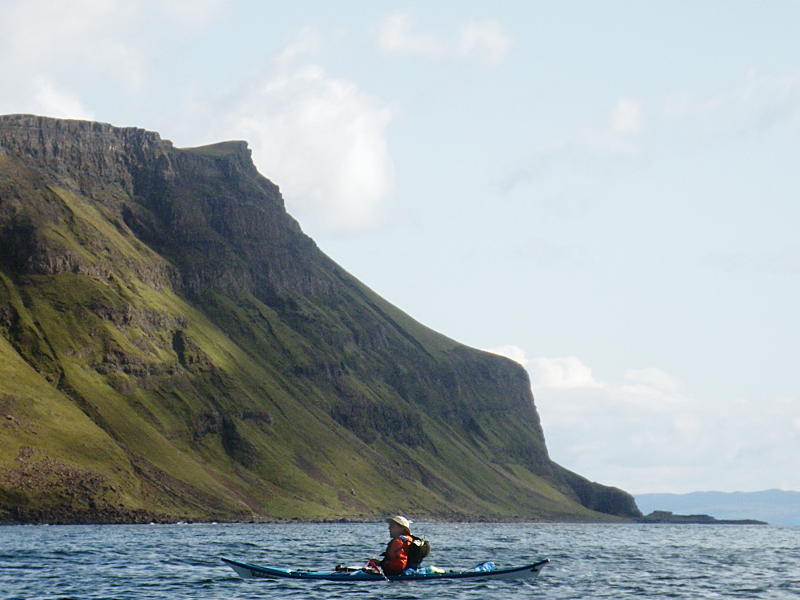 We continued eastward, along a rocky coastline with small islands and inlets similar to the previous afternoon. Now, however, we were out of the wind as we were sheltered by the cliffs. It was sunny with barely a cloud to be seen. We were heading toward Malcolm’s Point, and the very impressive cliffs which can be seen from the mainland. This is a very committing area to paddle as there is no easy place to land for a distance of about 15km. We therefore took the opportunity to stop for lunch and stretch our legs in a small sandy bay just before reaching the cliffs.

As we approached the cliffs, which were in tiers, you could see vertical columns, presumably basalt like that in Staffa and Ulva further north. Before reaching Malcolm’s Point, we came to a large concave area like an amphitheatre with a waterfall pouring over the top of the cliff and dropping straight for about 40m. 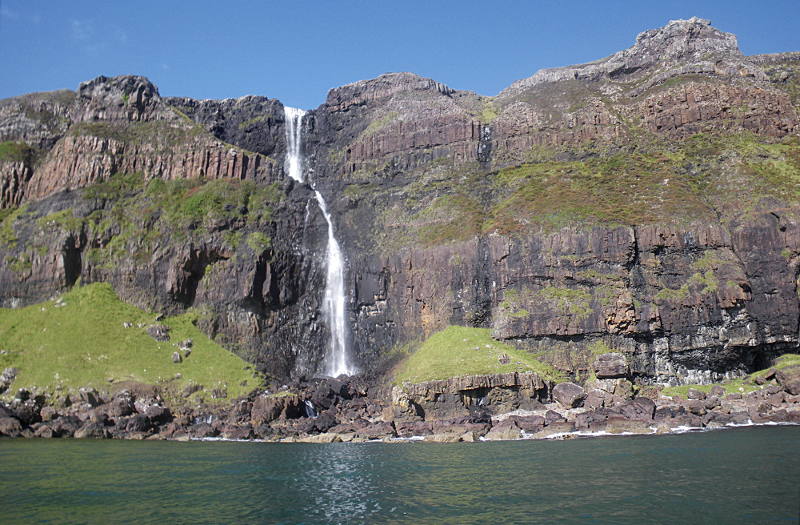 Impressive waterfall over the cliffs of Mull

We carried on around Malcolm’s Point where the cliffs were 250m high. As well as a small ruin, there were some stacks and arches near the point. We continued on to Carsaig Bay, and on our approach we could see the ruined pier on the far side where we planned to get out because there was road access. The last 2 km were torture. The end was in sight, but as we came from under the cliffs, we were caught be the wind funneling down from the north, and we also seemed to be paddling against the tide. By the time I made it to the rocky beach, Dave had already set off walking up the road to try to hitch into Bunnessan, which was about 12 miles away, to fetch the car.

Once I had dragged myself and kayak off the water I went to chat with some people with binoculars looking intently out to sea. They had been told this was a good place to look for seals and otters, but wildlife was in short supply. I told them what we had been doing, and when they left an hour later, they said they would pick Dave up if they saw him along the road. True to their word, they did pick him up, in spite of his disheveled looks, and dropped him in the car park at Bunnessan. We camped overnight by the pier, on some flat, grassy areas beside some old buildings. By the next morning, the weather had changed again. There was low cloud on the hills and it was drizzling, so we were not sorry to be on our way home.

We all agreed it had been a fantastic trip, in spite of our initial worries about the weather. As we were only a small group, we were able to move quickly even allowing for the head wind on the first day, covering over 50km. We saw 5-6 eagles, 2 otters, 2 herds of wild goats and a herd of red deer, as well as the usual seals. Even though the days are shortening, there was considerable enthusiasm for a further sea-trip later in the year.