Early May Bank Holiday, an easy trip on Loch Lomond before the midges would be about and a fair chance of some decent weather, according to the Met Office …..

Driving up the M74 on Friday evening was definitely wet and it was a great relief that it stopped as we drove north from Glasgow. The ground was very wet but at least we could put up tents without getting soaked.

Anna had proposed changing from a ‘wild camping on the islands’ trip to a base camp at Milarrochy Bay so that we were a bit less exposed if the weather was against us. Wild camping is allowed on the islands but not on the eastern side of the loch and so we stayed at the Camping and Caravan Club site which borders the loch. It’s not cheap but the facilities are very good. It's better value if you are a C&CC member, of course.

Saturday was windy and showery. Jeff’s description was ‘a few white ponies’  but we wanted our first dip to be fairly easy and decided it was a good day for a walk! The West Highland Way (WHW) goes alongside the Loch here and so we were not the only ones out and about but the marked paths in the Rowardennan Forest were quiet, with good views towards the hills and across the loch.

Early next morning Jeff and Jemma were up and out to make the most of the calm water. 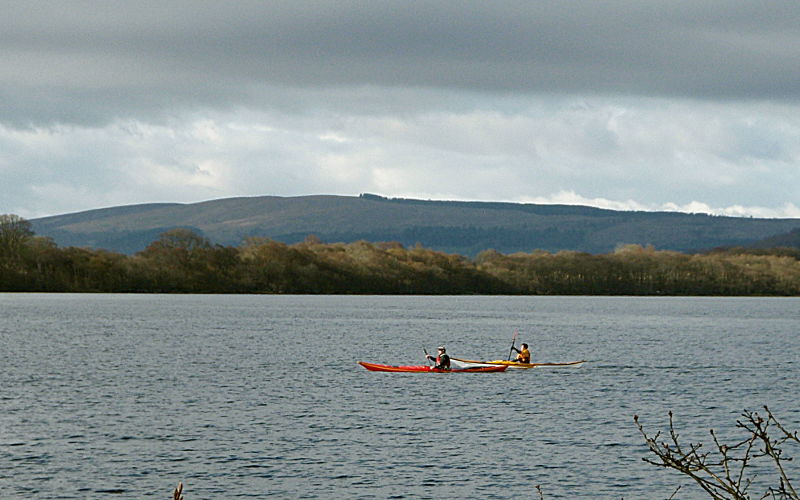 They’d had a two hour paddle by the time the rest of us were ready to get on the water but then, re-fuelled with a late breakfast, they were back in their boats to go again. We tootled up the east side of the loch to the goose nesting site where lots of honking greeted our arrival. We cut away from the mainland then and headed for a beach on the nearest island, where another group of kayakers appeared. They turned out to be from Berwick and were staying at the same campsite.

After a short break we continued moving west along the south side of Inchlonaig. It was much less windy than the previous day but here and there it would funnel between a couple of islands. We made the crossing to Inchconnachan without any problem and landed for lunch. The island is inhabited by wallabies, yes really! They didn’t come out to play when we were there but it did have a wonderful mossy feel to the ground and plenty of lovely foliage. 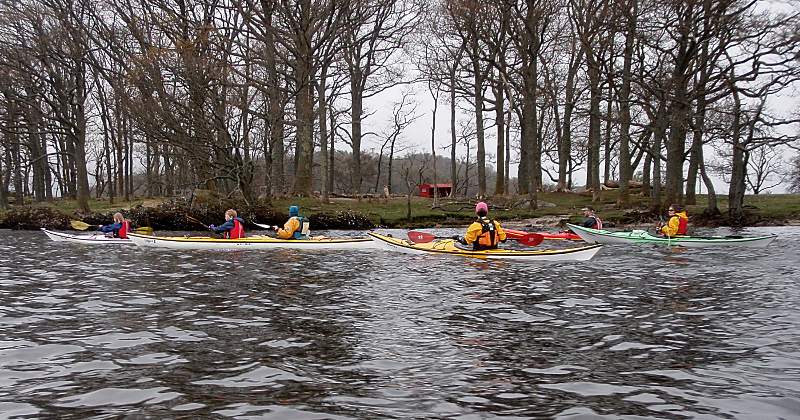 Back in our boats we headed south between two islands and started to feel some breeze, we knew it would be strongest when we had to cross back eastward between Inchcruin and Inchfad. Our two youngest paddlers were doing very well, Ethan was steering in the back of the double with his mum up front, Alice was on her own in a single kayak and coping really well with the wind and quite a big swell from the stern quarter. 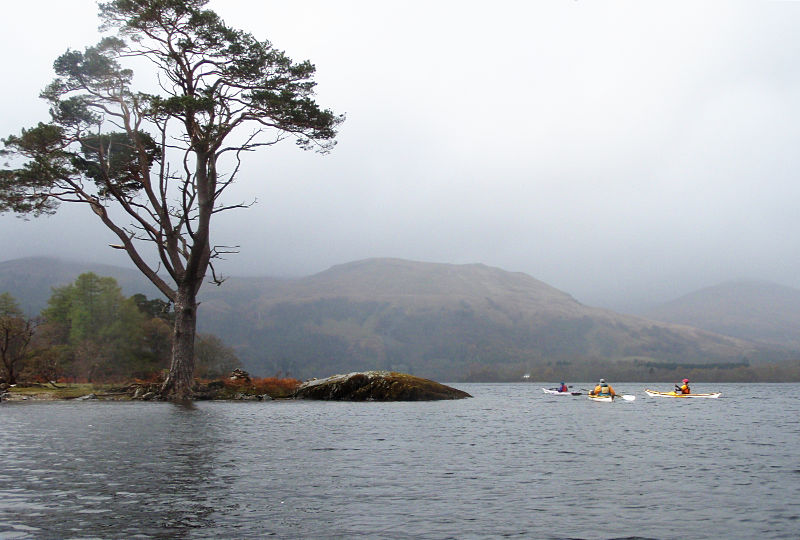 Monday brought very damp weather and we headed home in time for some afternoon sun in Yorkshire.

The eastern shore of Loch Lomond had plenty of people doing outdoor activities but was quiet with little traffic. The proximity of the islands makes it ideal for family canoeing groups with plenty of alternatives for a longer stay.

Thanks to Anna for organising the trip.