A gap in the high winds which have battered the country, and Scotland in particular, since Christmas, allowed four of us, Westy, Richard, Wendy and me, to squeeze in a long weekend to the Knapdale coast. Watching the weather forecasts with a degree of suspicion, we were pleasantly surprised when we were blessed with a period of high pressure, bringing settled but cold weather, with virtually no wind.

Vehicle shuttling and general faffing completed, we were on the water by about 11:00 on Saturday morning. We put in at Crinan harbour, on the edge of a large estuary which dries to give a fair expanse of sandbanks. Turning south at the end of the estuary, we picked up the ebbing tide, and made our way along the rocky shoreline. Just north of Carsaig Bay, we stopped for lunch – not for long as we soon became chilled – then continued to head south. Around lunchtime, the tide turned, and the afternoon was spent pushing against an increasing north-running tide. As we started to look for a campsite, we passed through a series of small islands, which magnified the effects of the tide, and some eddy hopping was needed to make headway. By the time we had got tents up, and boats sorted, it was dark (only 4:30pm - one of the problems of Scotland in January). Cooking, eating, washing up, a couple of tinnies and chat out of the way, and it was time for bed (8pm – one of the benefits of Scotland in January!)

After a guilt-free eleven hours in bed, we were up and on the water by 9:30 on Sunday. Again, the tide was running with us, so it was fairly leisurely paddling, but into a 3 foot swell coming from the south. It was cold, with a light breeze ensuring that any inadvertent dipping hands into the water was punished by a numb hand for the next half hour. We pulled out for lunch at the end of the island of Danna. Our stop looked out to Eilean Mor, a beautiful, peaceful island in the Sound of Jura. Ideally we would have been able to make a visit, but the tide was running strongly and we could see breaking waves in the races offshore. Also, the short daylight hours meant that we would struggle to make a worthwhile visit and get back to the mainland with reasonable light. So, we turned into Loch Sween, and made our way to Tayvallich. The light was fantastic, shafts of sunlight through breaking clouds, reflected off the sea gave a magical effect. 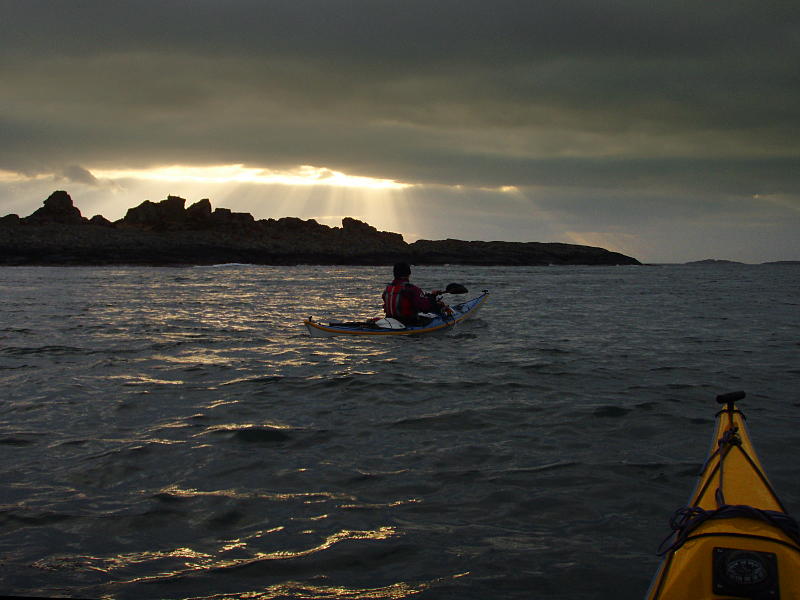 The wildlife was different to that which we normally see in summer. There were only a few seals, a few immature guillemots. Cormorants/shags (who can tell the difference ? Cue for a ribald joke!) were around in reasonable numbers, but there were a few things we wouldn't normally expect to come across – a Manx shearwater, several little grebes, a few divers (birds, not the rubber suited mammals), and we were overflown by several types of geese. We also commented on the absence of sailing boats. We thought that it would have been ideal sailing conditions, and didn’t let our complete lack of knowledge get in the way of strong opinions. We eventually saw one set of sails of a yacht out in the Sound of Jura, which followed us into Loch Sween, and was tied up in Tayvallich when we arrived. 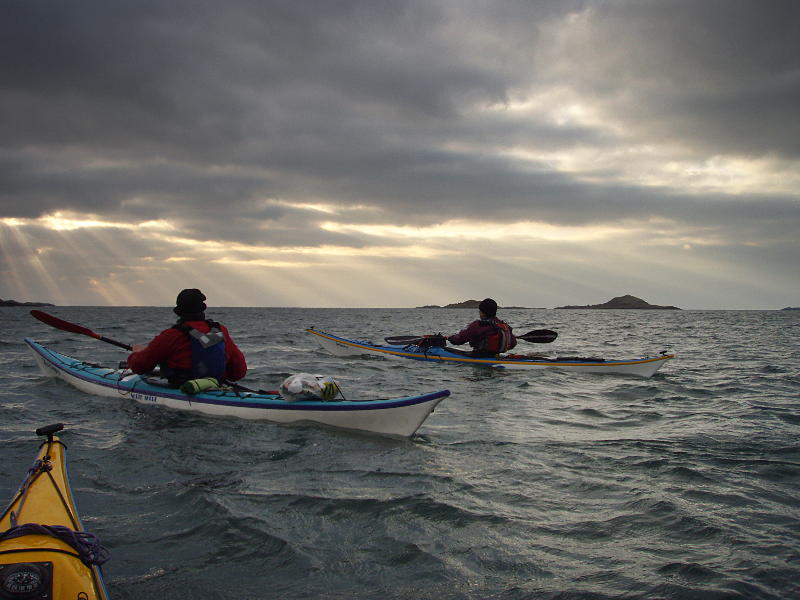 The recent storms have really left their mark in the area. There were a lot of fallen trees, but what struck us most vividly was the tide line in the village. Loch Sween faces south west and was fully open to the gales. The strong winds pushed the tides up the loch, and prevented it from ebbing. There was a seaweed strand line about ten feet above normal high water mark. One local chap told us that he had found seaweed on his back doorstep, and one lady of 97, who has lived in the village all her life, could not recall anything like it before.

Once again, admirable organisation of the trip and weather by Westy.