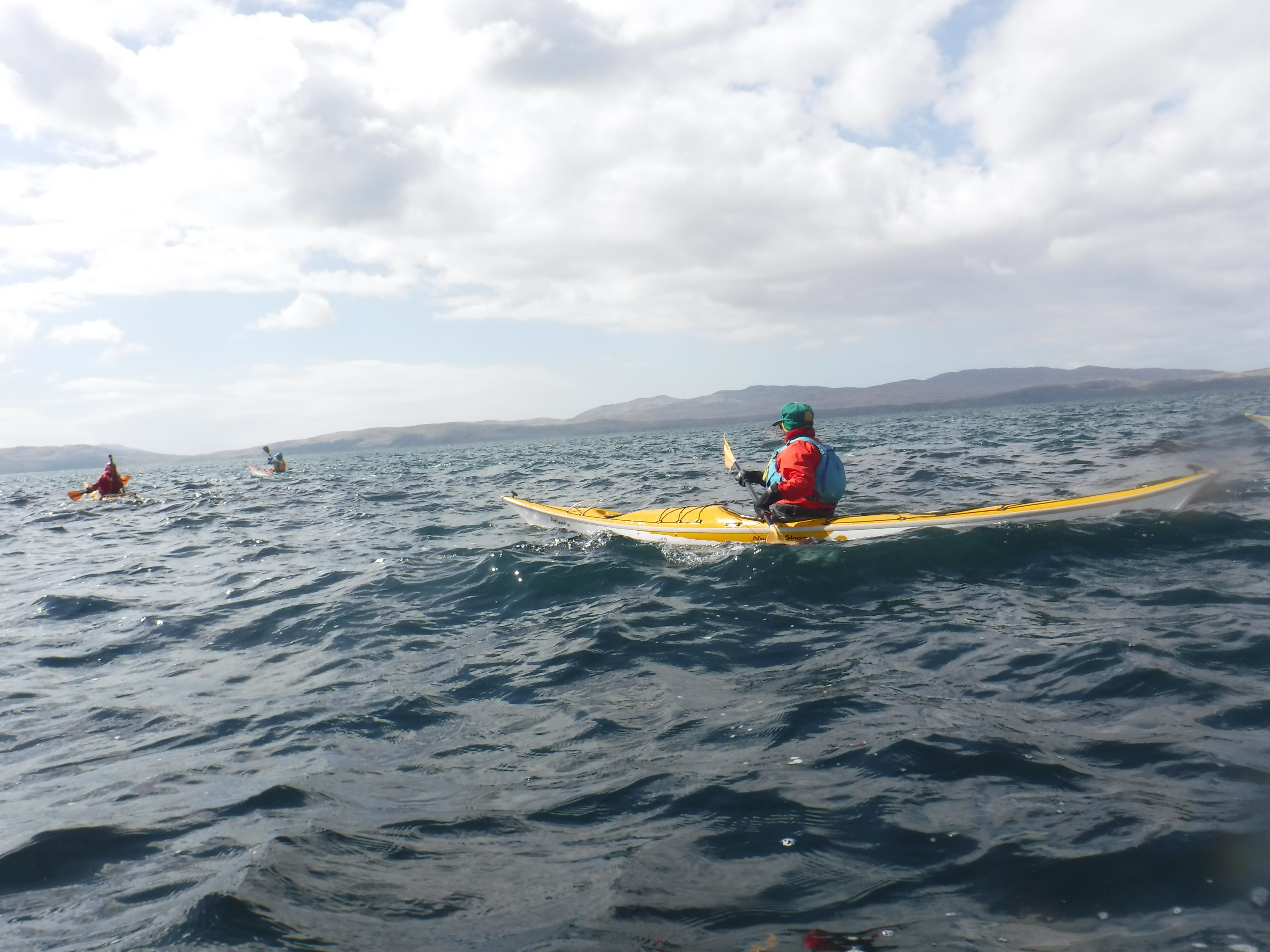 After deploying 3 methods of sleeping out under the stars (a tent, a hammock and a bivvy bag) the 3 of us we made our way to meet our other 2 numbers at Crinan Canal Basin and from there round to Crinan Harbour for packing, faffing, car shuttle and launch.

Day 1 went well with a paddle south down Jura Sound playing in the swells near the rocks, admiring the views and wildlife spotting. A nice unhurried day making good progress down the west side of the Tayvallich peninsula. Tidal streams in the Sound could be observed well off to our right as the outgoing flow from Corryvreckan made its mark.

Following a leisurely lunch the tide was now incoming and as we continued on our way a member of our group mistimed a paddle near the rocks and ended up being lifted up by the swell and deposited on the flat rock ledge past which we were paddling. Another member of the group accessed the reverse of the rocks via a small inlet nearby and the paddler was soon relaunched and on their way.

We made progress without further incident to our first camp on the western side of the Island of Danna. It was at this point that one of our number found they had brought the wrong tent, still, plenty of room inside a three-man tent for one person. No wonder it wouldn’t fit in the boat back at the ‘packing the boat’ stage.

Day 2 saw the group on the water and away at 9.30am heading south on the last hour of the falling tide to the historic Scotland island site of Eilean Mor, home of the Chapel of St Cormac (the Irish Saint Abban Moccu Corbmaic). A wander around the island visiting the Chapel, St Cormacs cave and the small visitor bothy was undertaken whilst the tide was on slack water, it was then back in the boats and off across the half a kilometre of water to the nearby island of Corr Eilean on the first hour of the incoming flood tide. Somewhere in that small distance one of our number decided that they would take a swim, probably due to the force 4 wind, 3ft swell and the many breaking white horses, and the deep water rescue that had to be carried out in adverse conditions meant that the tide had pushed the group back north and it was then easier to go straight back to a southern beach on Danna island. Decorum was restored here and the group set off once more around the southern point to our second camp on the east side of Loch Sween. Here we were joined at our evening camp fire by a group of paddlers from the Fife Canoe Club and a pleasant evening was had.

Day 3 and a short flat water 2hr paddle back up Loch Sween to the vehicle we had left at Achnamara to complete the round trip. Thanks to paddlers Lorna, Duane, Andy and Mary for an interesting 3 days of paddling.