The Garvellachs and Grey Dogs

In view of the programmed SOC trip for this w/e being cancelled, Clive, Bryan and myself set off for Scotland to appease our sea-kayaking hunger. Clive had masterminded the trip and had volunteered to drive us, so having loaded the 3 boats onto his roof, we set off from Darlington at 5.30pm on Fri. 22nd August.

The forecast was good and I was excitedly anticipating the maiden voyage of my new boat. After a short food stop near Erskine Bridge we continued, via Oban, arriving at Cuan Ferry at 11.30pm. Unable to see a suitable place to camp in the dark, we decided to sleep in the car, and being 'dead' tired we parked up by the cemetery.

We had a reasonable night but were awake at 6am and were soon outside cooking breakfast ! We drove the short distance to the ferry slipway and proceeded to pack the boats for the trip (plan 'A') - we couldn't wait to start.

Once round the northern tip of Luing, we swung SW into the Firth of Lorne, heading for the Garvellachs. After an hour or so we arrived at the island of Belnahua where we stopped to stretch our legs. They quarried slate here once, but evidence of quarry workers' cottages and rusting machinery are all that remain. 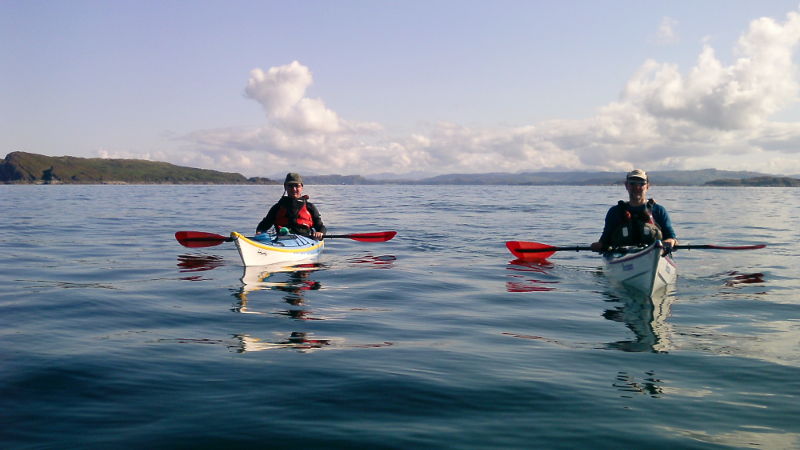 Continuing, we soon came to the most northerly of the Garvellachs, Dun Chonnuill, and paddled on, hugging the eastern coast of these islands, finally making the southern tip where we decided to halt for the day.

We landed in a narrow rocky cove, and initially pitched our tents on a scrubby area, but after a bit of exploration we discovered the monastery (complete with beehive cells) dating from AD542. So impressed were we with this area, that we decided to move the tents, re-pitching them on the short grass outside the remains of the chapel, with fantastic sea views. We chatted to some people who had a yacht moored nearby ; they asked us where our boat was, and seemed quite impressed when we told them we were sea kayaking / wild camping.

After tea we lit the usual fire (managing to keep it alight for quite a while given the small amount of wood we could find) and turned in for an early night. Next morning it's midge-hell taking the tents down - but hey, that's Scotland!

We set off across open water towards the north end of Scarba - a great paddle in glorious sunshine with 360° views. Hugging its coast for a short distance, we headed for the gap between Scarba and Lunga, known as 'the Grey Dogs'. The tide rushes through this narrow gap: Bryan, paddling heroically, managed to battle through it and waited on the rocks. I paddled like a maniac, but suddenly realised I was getting nowhere fast - in fact I was slowly being forced back! Clive saw the dilemma and said "follow me". Paddling to calmer water at the side of the channel, Clive attached his tow-line onto my boat, explaining it was for security, not for a free ride! He said "when I say go, paddle like hell!" I followed him, giving it all I'd got, and we made it... "What kept you?" quipped Bryan.

Once I'd got my breath back, we struck across the Sound of Luing, hit a beach and stopped for a well-deserved lunch break. Then round the south tip of Luing and up into Shuna Sound. A kilomtre or two further and we spotted a nice grassy area to camp. It was so warm we lay in the sun for half an hour before doing anything. The tents were pitched close to the water's edge, our leader assuring us that as it was now high tide, the water wouldn't come up any further. Wrong ! It continued to lap at our tent pegs, eventually making it necessary to move the tents a few feet to higher ground ! It was a lovely evening but suddenly got very cold at about 9pm, so we retired to the cosiness of our respective tents and got a really good long sleep. 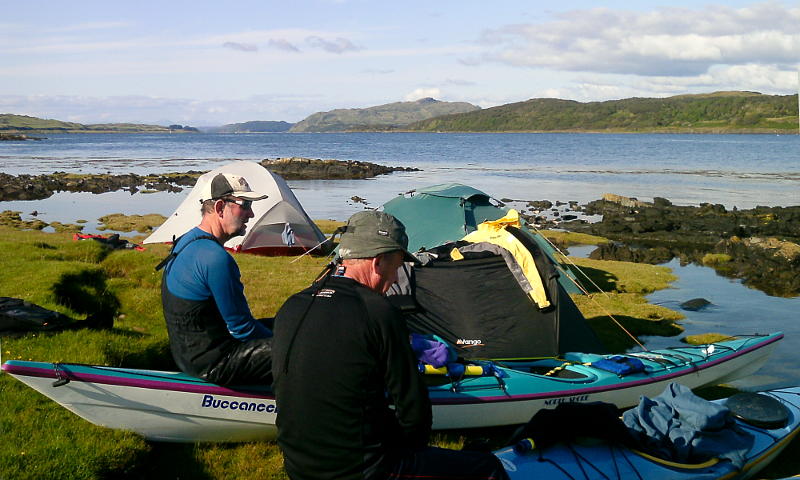 Next morning was Bank Holiday Monday, though here on Luing you'd never have known. Bryan and I started cooking breakfast but Clive was nowhere to be seen. Soon he appeared, having been for an early morning walk where he'd climbed a hill and got an incredible view of everywhere we'd paddled, including the Garvellachs.

We now had only a short distance to paddle back to Cuan but the excitement wasn't over yet. As we paddled up Shuna Sound, the breeze became a keen wind and the choppiness became a swell coming from all directions. It was 'eye-on-the-ball' time - exhilarating and exciting ! At the head of Shuna Sound we swung left and paddled between Luing and Torsa. I suddenly felt deflated, realising the trip was almost over. The slipway at Cuan came into view at the last moment, and our trip had reached its end.

But what a fantastic 3 days, thanks to Clive's planning, and helped along by perfect weather. Roll on the next one...