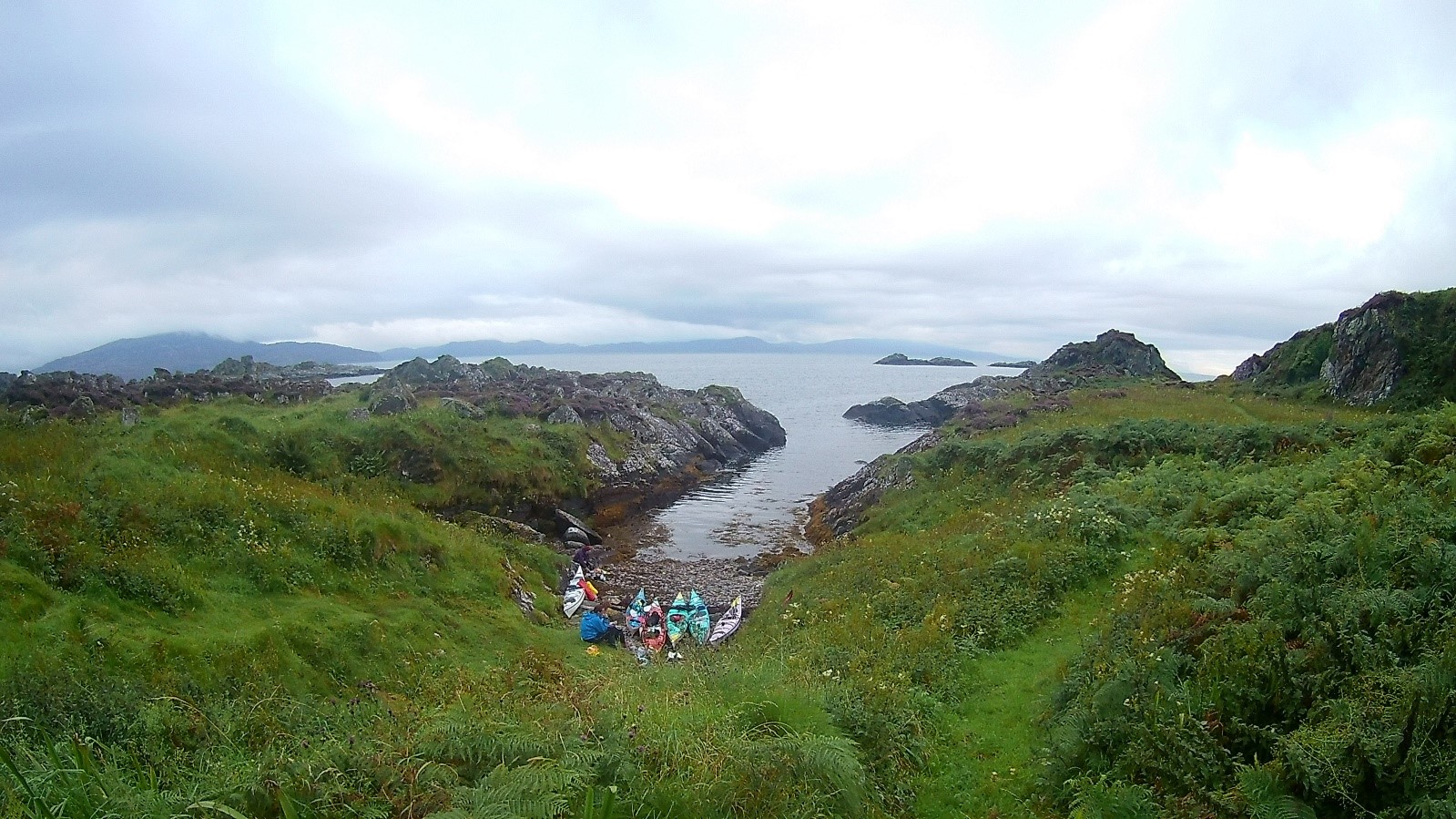 This trip was billed as a medium multi day sea kayaking trip to a group of islands situated in the Firth of Lorn. The opportunity inspired three new sea kayak paddlers to take on the trip all having done two or three single day trips experiencing a variety of conditions. They were joined by myself, Anna and Ann who were experienced sea kayakers to ensure we had man to man (or woman to woman) marking if conditions got interesting.

Day 1 - Travelling late on the Friday evening and wild camping overnight the group met up at Arduaine jetty on the banks of Loch Melfort and after the usual equipment stowage and faff we set out south west on a calm sea and falling tide to Craobh Haven. With lunch some way off we continued on around the southern tip of Shuna and across Shuna Sound to the southernmost tip of Luing. A further 2k of paddling saw us pull up for lunch opposite the gap between the islands of Scarba and Lunga. Planned timings were good so we enjoyed a leisurely lunch and waited for the tide to change direction.

The gap between the islands is known as Grey Dogs and the tidal flows through the gap can be very powerful but we had timed it to go through on the first hour so the stream was a gentle help on our way, it still produced some fun though with Ann finding the trough between some waves bigger than thought and getting a soaking whilst James decided to ride one of the large recirculating eddies and took off sideways. Once decorum had been restored and the small island of Guirasdeal reached it was decision time. The conditions were calm and sunny so a group decision was taken to forgo the planned bad weather route and go for the long 5k straight crossing to our target island. This was the first time our new paddlers had done such a crossing and just to reward them for their efforts Porpoise were sighted at the halfway point.

Arriving at the most south westerly island of the Garvellach chain we were able to locate the known landing point and set up camp at the remains of the monastery. Even managing to get a fire going after dinner to while away the evening.

Day 2 – The weather forecast was as it should have been, another calm and sunny day, and after welcoming a group of visitors from an early bird tourist boat to our landing spot we launched for our return journey. Following the eastern side of the island chain northwest we paddled leisurely and close in to the islands to avoid the southerly tidal flow. This flow was felt as we crossed the gaps between the islands but didn’t present any problems. At the most northerly island of the chain, Dun Chonnuill, we stopped for ‘first’ lunch and Clive scaled the heights of the island to visit the remains of the castle that once stood there, he reported that since he was last there the whole of the remains were overgrown and not visible at all, he did however spot a young male deer who must have swum the short crossing to the island from its much larger neighbour. Suitably rested we continued east with the 3k crossing to the island of Belnahua and ‘second’ lunch.

Belnahua island was a Victorian slate quarry and the whole of the inside of the island is quarried away with freshwater lakes now occupying its centre where hundreds of workers once toiled. Original workings, railroads, boat dockings, machinery, houses, office buildings, all remain though in a state of disrepair and ruin. We whiled away some time here exploring and waiting for the tide to change. When back on the water we now had the tidal flow with us and went around Fladda lighthouse, just because we could, before heading north and west past Cullipool to the old harbour of Port Mary where we set up camp.

The obligitary fire was lit after dinner but it was soon discovered that it was too low and that the incoming tide would put it out. Step forward girl guide and self-confessed arsonist Anna who proceeded to scoop the fire onto a handy piece of plank and transport it to a safe place higher up the rocks.

In bed that evening all experienced the loud breathing and chomping just outside their tents by the local herd of cattle whose nice grassy meadow we had camped on. Lorna also experienced the unsettling sight of a large number of pairs of eyes lighting up in a head-torch beam in the middle of the night. Don’t ask.

Day 3 – And the forecast bad weather arrived with the rain pouring down and the wind blustering from the south west cutting up the sea into a small chop. Launching into our protected harbour we then broke out into the open sea and made our way the 800m north to round the northern tip of Luing before turning into the relatively protected Cuan Sound. Riding the tide south we made good headway in choppy, windy and rainy conditions, cutting through the gaps to the north of Torsa island and then on towards Degnish Point on the mainland. From here it was a short dogleg via Eilean Gamhna island to round Arduaine point and back to the jetty to complete the round trip.

Paddlers were Lorna Mallett, John Brimmell, James Brimmell, Anna Broadley, Ann Jones and myself. Thank you all for the company, here’s to the next one.