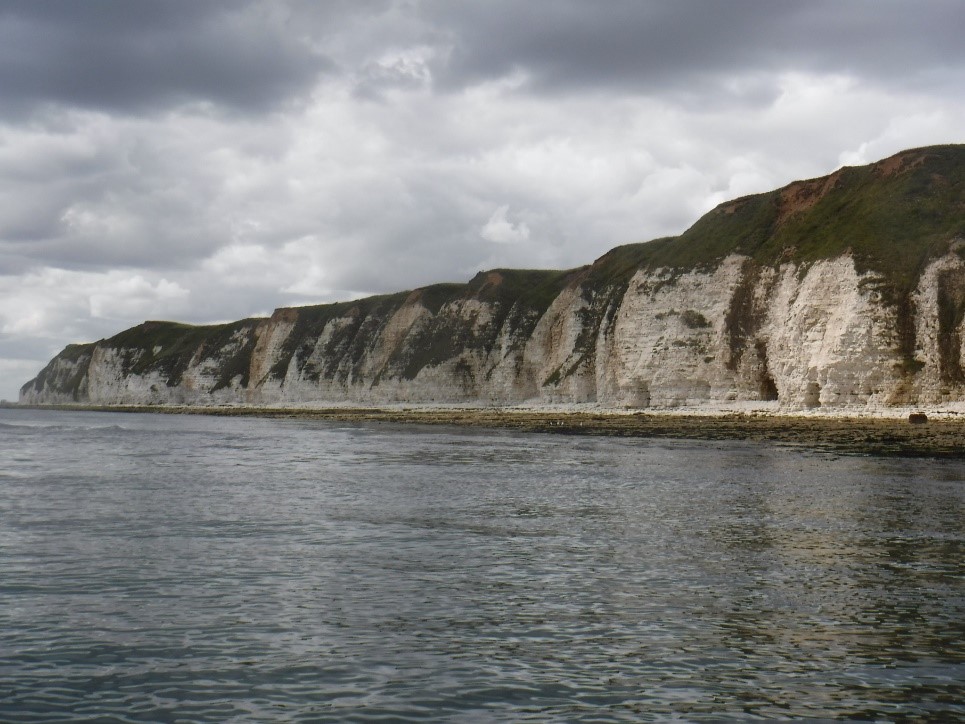 Seven intrepid paddlers of mixed abilities met at Flamborough South Landing to Paddle around Flamborough Head. After changing into gear, shuttling the vehicles and carrying the boats down to the water line we sprang into action and ate lunch.

Then with priorities sorted we set off east beneath the chalk cliffs. The sea was flat, the sky was blue and there was no detectable wind but Clive continued to mutter to any sea gull that would listen about his 107 mile drive to get there, apologies for dragging you down south Clive! As we came out of the shelter of the south side of the head we were met by a family of seals (who accompanies us around the east facing side of the head) along with a confused swell from the North West. The swell provided tricky paddling conditions and made most of the caves along the North Coast inaccessible, although we did manage to explore an odd arch/cave system and paddle around a stack.

After a brief landing and con-flab at Selwicks Bay that even required reference to the map the group split into a fast and slow party. Paddling along the North side of the head was exciting, fun but also a bit scary with the swell and the impressive pock marked, indented but committing cliffs to our left. It looked like the fast group had decided to head for Filey Bay but at the last minute they turned and headed into North Landing, where the waves were breaking on the beach. Everybody successfully landed in the surf although Shane swears it was twice as big when he landed. We just needed to drag our boats up the steep hill to the car park (and café) before driving back to our homes behind the harvesting tractors and holiday caravans. The paddlers were Clive, John, Robbie, Lorna, Shane, James and Abi.

Article copyright © John and James Brimmell 2017; photo is copyright but uncredited since someone posted without naming the photographer