Diary of a Hungry Paddler

I went to Westy's straight from work but was very organised and took wash bag, towel and change of clothes. Ann was already there and getting loaded up and boats tied on.

We were all ready to set off at 5.15pm. We got to Port Appin 6 hours later after stopping in Glasgow for fish and chips and found a camping spot on a bit of wide verge by the side of the road. Snuggled up in my sleeping bags by midnight - what luxury, it's usually 2.00am !

We all met up at Port Appin and had got ourselves sorted and on the water for 11.00am. 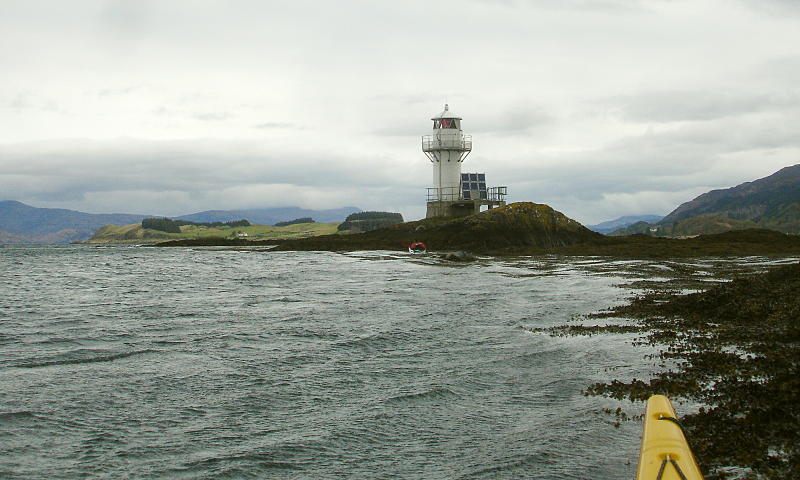 Due to the unforeseen strength of the wind we were on plan D or E by this stage but set off with gritted teeth and determination into the wind and against the tide as any SOC trip should. We then ferry glided across to Inn Island and took the opportunity to stop for first lunch and have a look at the industrial heritage - falling down cottages and crumbling lime kilns. We also met several nesting geese with their goslings and eggs.

Back on the water and now we had the wind and the tide with us so we fair hurtled down the east coast of Lismore, stopping briefly for a second lunch just past the ferry 'terminal' continuing down to the bottom of the island. We had a brief pause to watch a pair of otters playing in the water between our boats as we paddled past.

Due to this now being plan G we had missed the opportunity of scooting round the end of the island due to uncooperative tides which hadn't changed their plans because of a little bit of wind. We therefore took the oppounity of an early stop and set up camp overlooking the lighthouse.

It continued to be windy and drizzly but stayed dry enough for Westy to enjoy his barbecue on the beach, not quite Hawaiian style.

Due to Andy's determined efforts, enough wood was gathered for us to enjoy the smoke of a roaring fire, if not the heat. An opportunity to burn our rubbish and sit in the shelter of Nick's tarp while talking nonsense, having a drink or two and slowly getting colder and colder.

So it was off to bed to read our books. It rained all night! I was cosy warm in my two sleeping bags so was a bit surprised in the morning to see a fresh fall of snow on the top of the hills. I wasn't surprised when I took a trip to the loo as it was sunny but perishing. I was so glad I'd remembered to take all my breakfast stuff to the tent so I could enjoy hot porridge in bed.

The plan had been for an early start so we could go round the end of the island before the tide started running too strongly against us. This being the sort of trip it was, things soon progressed on to plan K, as one of our party was ill and unable to paddle. Being the loyal friends we were, we decided to head off without them to enjoy a day trip from the camp site. 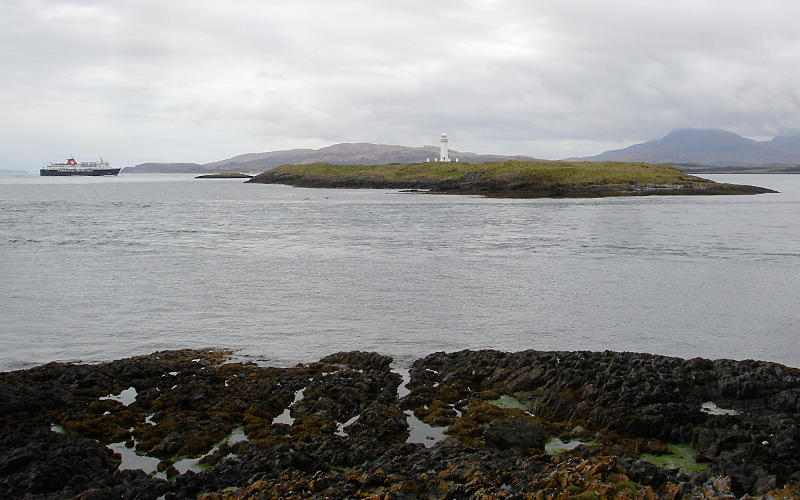 We crossed from Lismore to Mull. We had to do a fair bit of ferry gliding due to the tides and watch out for the CalMac ferry but all was well and we soon landed at Duart Castle - I can recommend the tea shop - yum. 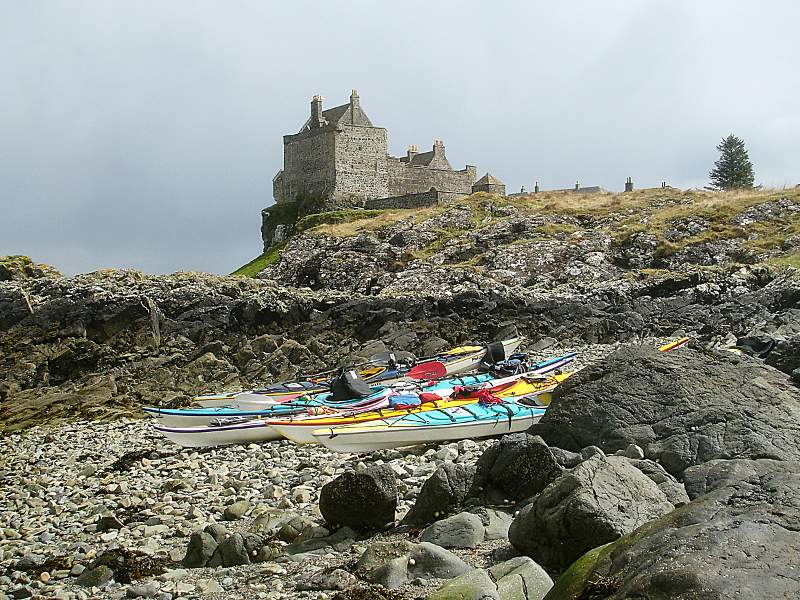 From there a short trip down the east coast of Mull to Loch Don where we sat on a rock and had something more to eat and waited for the tide to turn and the paddle back to our camp site. We entertained ourselves by watching the seals watching us.

We got back to the camp site about 4.00pm and quickly formulated plan M which was to de-camp and do a couple of hours paddling, making it a much easier day on the Monday and enabling us to be home at a reasonable hour, and not 1.00am.

Unforunately Westy's original intentions as to what he wanted to do when we got back to the camp site had to be put on hold. So with a bit more eating and lots of packing we were back on the water for 5.30. 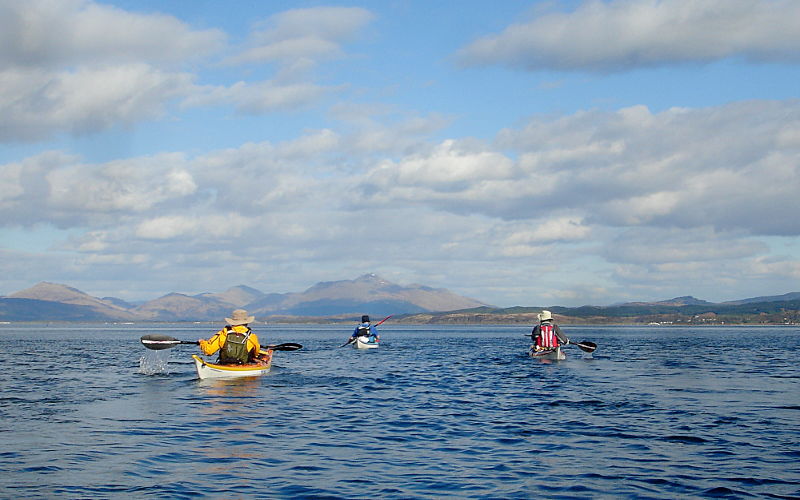 We had another good look at an otter as it ran along the shore then into the water, coming up and lying on its back then diving down again to come up munching. A brief stop to put some more clothes on as the wind had picked up and some of us were suffering goose pimples. 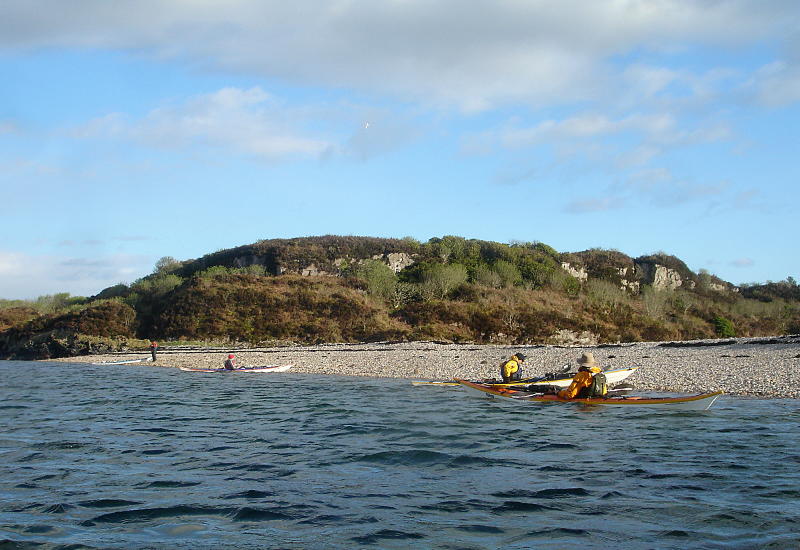 Then we headed over to the mainland to look for a campsite. Now usually this is a really frustrating time of day when you're all tired but just can't seem to find any suitable camping anywhere. By the time you do you're just about ready to lynch anyone who might suggest a better site just a little further along. So imagine our amazement when our bearing took us directly to a really lovely spot. No need for any discussions, we were making camp here.

Time for us each to pick the perfect spot to pitch our tent, then put on the stove, brew up and have tea.

Andy was surrounded by wood without having to move from his tent. The only thing was, it was high tide so we were unable to have a fire (we light fires below high water mark so they are washed away by the next tide).

It was pretty chilly by now and we were quite tired after more than 8 hours paddling (with just the occasional stop for food and tides!) so we got tucked up in bed only to be kept awake by the cuckoo, owls and foxes.

Frost covered our boats in the morning but the sun shone down and the wind had dropped a little.

We paddled the last 10 km back to Port Appin with heavy hearts knowing our trip was at an end.

Third day route on OS Openspace - not quite what the main group did, GPS from Andy's sneaky route back to his car.

I loved it. The weather made it interesting, the company was great, the wildlife superb and the food filling.

Thank you to Westy, Ann, Nick, Kath, Wendy, Pete and Andy for letting me tag along.

Fuel for my kayak

Breakfast - a good dollop of porridge with loads of dried fruit and a slowly melting bar of chocolate. Mug of tea.

Snack - cup of tea and large chunk of carrot cake at the tea shop.

I probably missed a bit out somewhere ! Food always tastes so good when you're outdoors.