Crinan Canal and Beyond

There were seven of us on Pete and Wendy B's May bank holiday paddling trip in Scotland: P, W, Alison, Anna, Kay, Ann and myself. We met at the Lochgilphead campsite on Friday evening (2nd May). 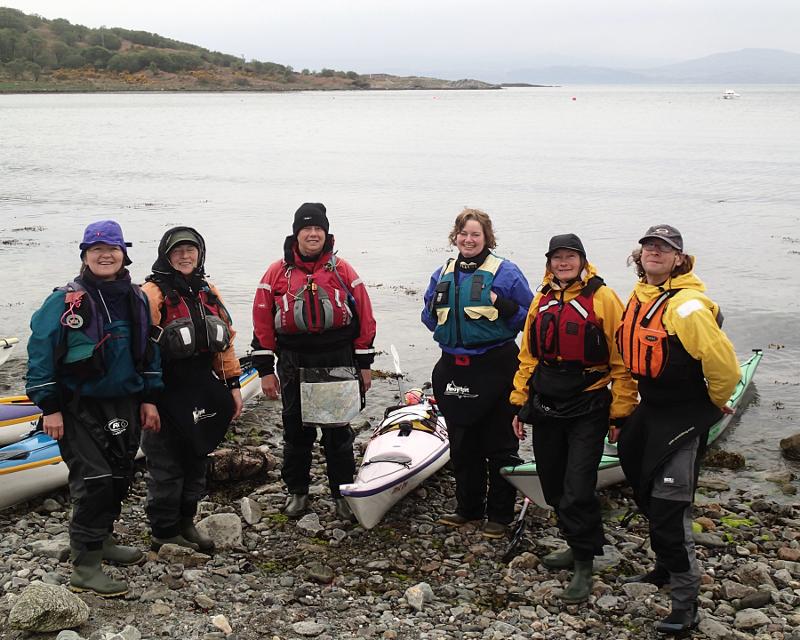 I listened with envy to some of Pete's epic paddling adventures (why doesn't he write a book ?) before turning in. Sat. morning was warm and sunny, and when we'd got the boats sorted, we did the obligatory shuttle, leaving cars at the pretty village of Tayvallich. We set off up the Crinan Canal where joggers and bikers were also doing their thing. All very pleasant. A few miles further on we arrived at the first set of locks. We knew we'd have to portage round the locks, but I don't think anyone had quite realised the logistics of the operation. The five locks were a few hundred yards apart - too close to portage one at a time, but a bloody long walk to get round all five, especially with seven laden sea boats. Maybe it was just as well that we hadn't realised how knackering / time-consuming this would prove. A mile further on and we did it all again (just for fun !) only this time in the rain. Thank God we had two kayak trolleys between us - we'd have been stuffed without them. Still, we were then able to enjoy some pleasant, uninterrupted paddling, albeit aching somewhat from our ordeal. It was late afternoon when we reached the Canal entrance so, taking advice from an artist who lives on the canal bank, we manhandled the boats down a slipway into open sea, and paddled across to a flat, grassy area above a beach. As I recall, someone murmered "let's get the tents up and put the dinner on!"

Next morning (Sun.) we headed out of Loch Crinan, glad to be on salt water. Turning left into the Sound of Jura, we were happy to potter along and Pete pointed out some porpoises. They were really black blobs to us, being a fair way off, but fascinating all the same. When we stopped in an inlet for elevenses, it was revealed how everyone had been earwigging the phone conversation I'd made to my missus in my tent last night. Apparently my voice had been that loud, they couldn't help but hear. Fortunately I'd told my wife how nice my companions were, and hadn't slagged anyone off. We continued down the Sound of Jura and, early afternoon, one of our party expressed a wish to make camp on an island we'd spotted across from Carsaig Bay. We landed, and having decided it was a perfectly acceptable camp spot, some of us had an invigorating paddle to some nearby islands. Pete, with his experience, could see some fairly fast tide races, which we kept well clear of. The tents were up in no time (though I managed to snap one of Pete's tent-poles). But as you know dear readers, he carries everything and was able to repair it in minutes. A pleasant evening ensued, with people reminiscing about past SOC sea trips.

On Monday morning, we only had a short paddle across to Carsaig Bay, after which the drivers walked the short distance to Tayvallich to get the cars. We regrouped in the lovely cafe at Tayvallich and then Anna, Kay and Alison headed off for home. The remainder of the party had one last port of call. We drove up the road where Kari-Tek were doing an open day. They had numerous kayaks which paddlers of all ages were trying out. Mike Nelson (of North Shore) was there and I sat in an "Ocean" - his most recent baby. Which got me thinking...especially when he said I was welcome to visit his workshop in Stokesley.

Thanks to Pete, Wendy and everyone else for a fun trip.