The new sea boat was almost finished, and I'd had a few paddles on Derwentwater, Lake Bala and Ullswater. What I needed now was a proper maiden voyage at sea - and since she was built as a dayboat, a nice day trip in a calm sea would be ideal. But the next opportunity was Easter, and a four-day trip was planned. Could I fit in gear for that long, and was it sensible to commit to a four day trip on a maiden voyage ? Well, the forecast didn't look bad, so Piqqalujamik takujumavunga went on the roof and off up to Largs.

I'd not been in the town five minutes, getting chips, when I was accosted by a scottish gentleman enquiring about the boat and its Inuit name. The conversation was brief (my chips were going cold !) and as he departed he handed me his card - no less than Duncan Winning OBE, Honorary President of both the SCA and the Historic Canoe and Kayak Association. Wooden boats are certainly a way to get noticed !

Soon, Dave West turned up, followed by Johnny, Jenny and Alison, then Clive, Wendy and Richard. We noticed that the wind was perhaps a little stronger than we had expected. In fact, when we went down to the Yacht Haven it was quite a lot stronger. So we went for a beer...

A little calmer on Friday morning, so after a hearty breakfast during which Gareth arrived, we put on and headed out into the Clyde, noting such scenic highlights as Hunterston Coal terminal. The new boat is narrower than my North Shore boat, though not as narrow as my first wooden boat, and I noticed that paddling down the Fairlie Roads was perhaps not exactly "relaxing". But we were soon paddling alongside Great Cumbrae in sunshine and flat calm ("It's always like this!")

Paddling quickly against the swirling tide around Farland Point, those used to the quietude of Scottish Islands were surprised by the bustling town of Millport, at which we did not stop, but headed out past Portachur Point and into the main channel of the Clyde for the two mile crossing to Bute. Now the wind was NNE, the tide was coming up the Clyde and we were heading SW - with wind against tide in a quartering sea it was getting a little choppy in the middle. But I was starting to get used to the boat and just as I began to relax a little, someone stole my sky ! Either that or it was raining unbelievably heavily, even for Scotland.

Concluding that I was upside down in the sea and that I ought to do something about it, a roll seemed in order. First go got nowhere near, but the second try got me a breath. At this point it occurred to me that I had a really nice tight-fitting boat with a tiny "Ocean" style cockpit, and that if I was going to wet exit, perhaps I should do so before I got really short of breath, in case it turned out to be a struggle (no, I hadn't rehearsed this manoeuvre in this boat - oops!). However, gravity and buoyancy work wonders and in no time flat I was swimming. Swimming a kilometre from Bute in a choppy sea, but nonetheless, with my head above water.

Needless to say, SOC came rapidly for the opportunity to practice their rescue skills and soon had me in the conventional upright-inside-boat position. Pumping out was a little entertaining, but, once done, paddling resumed, and I didn't hang about (an April swim in T-shirt and shorts is very bracing !). Minutes later we landed in Glencallum Bay for a brew - and up popped a submarine just offshore, apparently wondering about the little white upside down face they had just seen through their window :-) 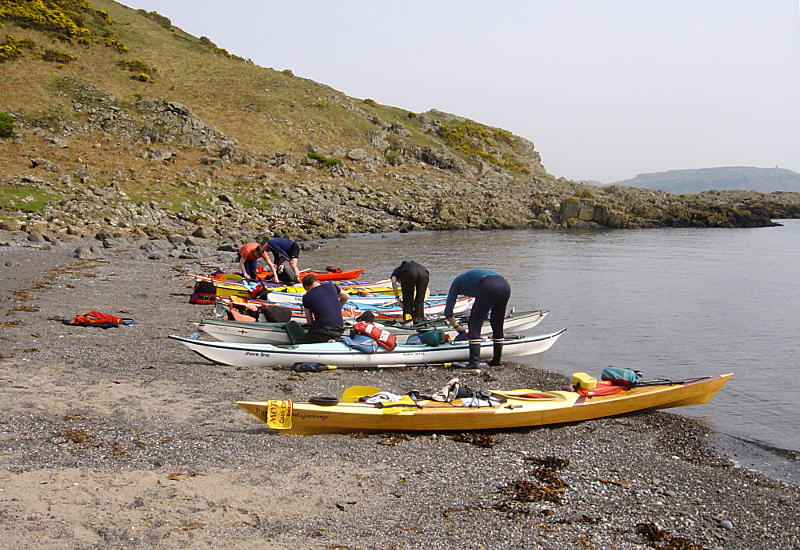 The west of Bute proved more sheltered and we made our merry way to Inchmarnock, where a campsite was found at the very north end. A wander down the length of the island was punctuated by a mainly psychological encounter with a Heeland Bull - who was only just less frightened than Westie, who retreated at this point while the rest of us took to the delightfully flowery woodland to avoid causing permanent trauma to the bull. We failed to find the Bronze age tomb with its skeleton covered by a pane of glass (which, it later transpired, was right next to where we were camping) and for some time failed to recognise the chapel until we realised that all its stones had been half-inched to build the farm, and the blue plastic sheet marking an archaeological dig was all that was left. You can see all three day's route on this OS openSpace Map. 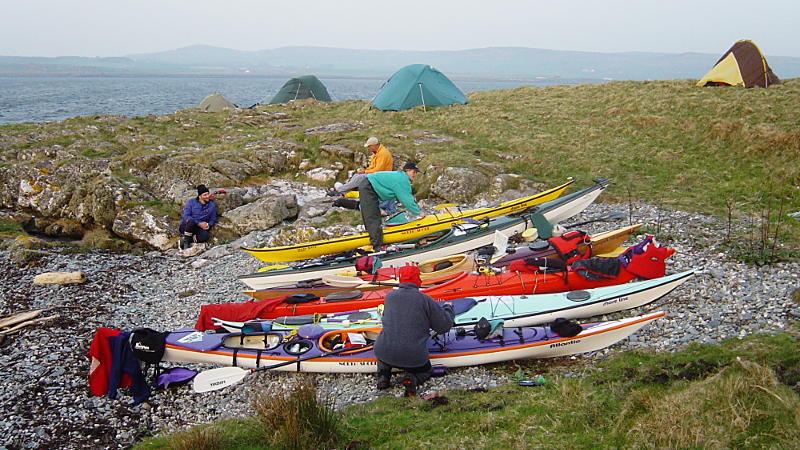 Saturday saw us crossing to a lunch stop on Bute where some visited a chambered cairn while others stuffed themselves on pancakes. Three miles further on, we rounded the western tip of the island to re-encounter a stiff wind. Whilst some crossed the channel with a view to visiting Eilean Dubh, a majority vetoed this idea in favour of hugging the shore in the lee of Bute, so we all regrouped at Buttock Point to paddle into the teeth of a by-now-quite-strong easterly past the Burnt Islands and on to the Kyles of Bute where we got off. 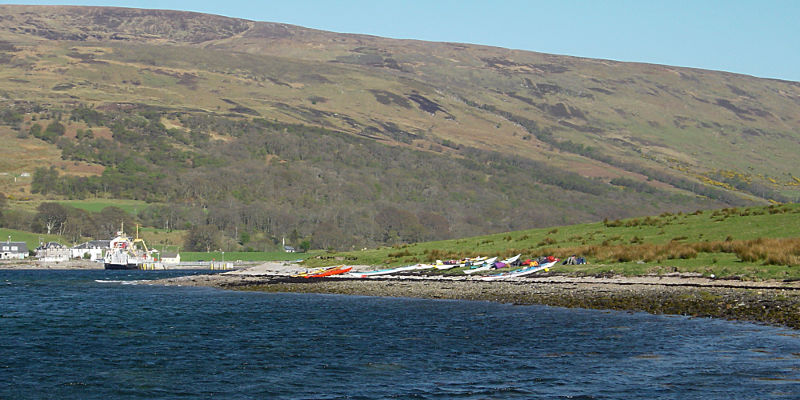 Waiting out the wind near the Bute ferry

White horses capped the waves as far as the eye could see, and no-one fancied trying to cross the quarter mile to the other side, so we hung about for a few hours to see if it might improve. We still had two days and there was always the option of a ferry if things stayed rough. However, by five O'clock the wind was easing and we set off, trying to time things so as to avoid the wake from the frequent crossings of the Kyles of Bute ferry. This was rather spoiled by Gareth sat casually in front of the slipway as the ferry approached, taking a call on his mobile phone !

Grabbing what shelter we could from the little bluffs on the Cowal shore, we headed at a reasonable rate down the Kyles. Tactical discussion at Strone Point decided us to cross Loch Striven, heading to the south of the ugly NATO fuel jetty to the shore at Port Lamont. Here, at dusk, we found a passable place to camp by an old yard, and just after pitching, were greeted by the night watchman and his dog, who informed us we were on private property. However, given that our only transport was the kayaks, and it was now on the verge of darkness, he hadn't the heart to chuck us off.

Just time to collect driftwood (and, in Alison's case, some impressive bruised knees) and start a fire. I found a nice steel-tube wooden-slatted chair ("fell off the back off a ferry, guv'nor!") to recline next to this, from which I was entertained to watch a gust of wind produce a shower of sparks, at which the four in a row sat neatly on a large log all fell rapidly backwards - luckily no drink was spilt !

Sunday morning and a forecast for increasing winds by Monday was a good reason to cut and run across the Clyde for Largs. It was sheltered enough rounding Ardyne Point past more derelict yards and a pleasant view across to Rothesay. Toward Point was the starting point for the five mile diagonal crossing of the Clyde. The wind strengthened and there was quite a chop at first, but as we left the land behind, the gusts waned and the waves became more like a short swell. Our timing was good to avoid the worst of the wake from the Wemyss Bay ferry and my confidence returned as we passed the mid point steadily heading for Knock Castle and calmer water in the lee of the mainland.

A lunch stop ensured we were relaxed for the final leg down the coast back to Largs Yacht Haven, but we were hit by quite a strong squall crossing Largs Bay - it's not over until the boat's on the roof of the car ! Once that was achieved, we had a "proper" lunch, then a wander round the chandlers' to cat calls of "Don't sell him any gadgets!" They hadn't got any self-righting gadgets for kayaks (you're supposed to do that yourself), so they didn't.