Around Raasay and Rona at Easter

The weather at Easter can be somewhat fickle in Scotland, so it's usually best not to plan a trip anywhere very exposed, or expensive to get to. Raasay lies east of, and fairly sheltered by, Skye, and you can get to it via the Skye bridge which nowadays is free, so neither too much time nor cash is lost if a retreat to the mainland becomes necessary. With a latish Easter in mid-April, this seemed like a good bet.

Quite a large group met up early Good Friday morning at the snack shop in Broadford, and moved on to a proposed put-in opposite Scalpay where the map showed some parking at Camas na Sgianadin. This would have given us an option to paddle round Scalpay at the end of the trip without having to worry about the tide through the narrows in the Sound. However, it seemed to be a bit of a carry to a rather muddy beach, which is not ideal for starting a trip, so we looked a little further on and found a good put-in with some room to park just east of Strollamus. As we got ready next to a small slipway, one of the locals arrived, and told us we could leave a couple of cars within the compound, as this would stop cars parked in the layby from blocking the visibility for people coming in and going out. 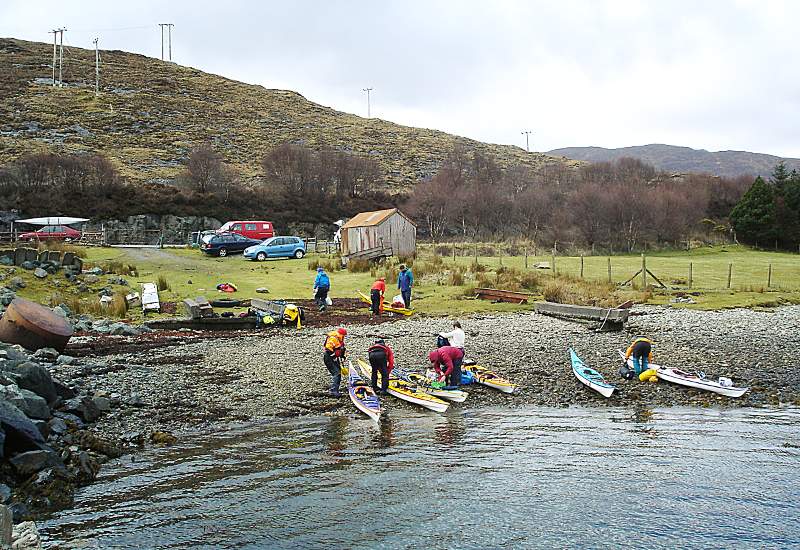 Although sunny, it was quite blustery, and after a while, as we passed the entrance to Loch Ainort, we had quite a strong wind being canalised into the Sound of Scalpay. The next big inlet on the left was Loch Sligachan, which leads back inland to a low pass right over to the other side of Skye, so this had a strong and gusty wind blowing down it, making for quite a choppy sea as we crossed to the ferry landing at Suisnish. 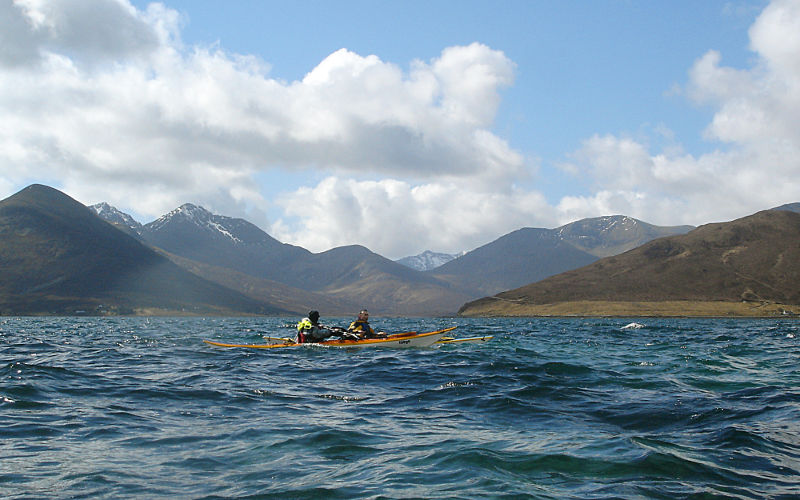 Anna and Nick in the Sound of Scalpay passing Loch Ainort

A brief stop here then up into the narrows between Skye and Raasay, before making our way up the west coast, now quite a bit more sheltered, but overcast and damp. I managed to catch a fish by trolling a line behind me, but it was a bit too small to keep, so I threw it back just as I spotted an otter nearer the shore. I hoped I hadn't nicked its dinner !

There are not many nice beaches, but we didn't want to end up camped by the island's only road in Loch Arnish, so we stopped just short of Manish Island where an inlet allowed easy landing, but the land was mostly either bumpy and sloping, or flatter and very wet. Pegs were not keen on entering the ground anywhere, as rock was just below the surface even on the boggy bits. Eventually everyone found a spot for their tent, though some were a bit of a slog up from the boats. 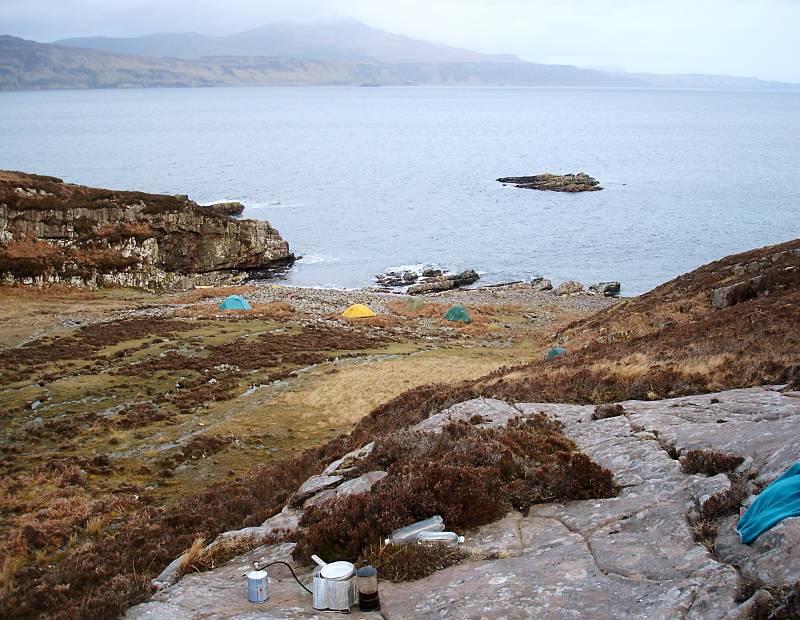 Easter Saturday continued windy as we passed Manish Point and made a short crossing of Loch Arnish to Ard an Torrain. With the wind now more behind us, some were catching waves and surfing ahead, so the party was getting a bit strung out, which is always difficult in a large group. I think Pete's neck was getting sore as he swivelled back and forth counting heads. Eilean Fladday now loomed ahead, though it is not at all obvious from the south that a channel separates it from the main island. Luckily we managed to get everyone regrouped before anyone set off round the exposed west side, and threaded our way through Caol Fladda, which was really quite sheltered. From Rubha Breacaichte, another bay opens, and Raasay itself is quite narrow. We kept a little closer inshore, as there was another key passage to find, if the tide was high enough. This very narrow channel cuts off Eilean Tigh from An Caol, at the north end of Raasay, and had just enough water to allow us to pass through, stopping for lunch at the eastern end, by Caol Rona.

After lunch, not everyone wanted to go for the original plan to go right round the north of Rona. Richard and Jennie, Gareth and myself were keen, but others wanted to run down the more sheltered east side back towards home. Pete came as far as Acairsaid Mhor before joining the others, whilst the four of us stopped for another brew in the shelter provided by Rona Lodge. Continuing up the west side of Rona, conditions were not too difficult, and soon we were at the northern tip, paddling into tidal lagoons full of kelp under the watchful gaze of the lighthouse and various NATO installations. In the overcast light, this looked a really good place for seeing otters, but they must have had better things to do as we saw very little wildlife here.

Rounding the northern tip, we had rather hoped to be in more shelter on the east side, but the wind had changed and was now more from the south or southeast. We had the tide with us, but the wind against us, which made for almost ten kilometres of rather hard work into a big head sea. We started by hiding behind each small headland to reduce the wind, then going full-on into the wind to reach the comparative shelter of the next bay. We eventually concluded that this was probably costing us more time and energy than just staying further offshore where the headlands didn't concentrate the wind, so plugged on south out in the weather. I confess I rather enjoyed this, with lots of adrenaline as we crashed over each oncoming wave. Towards the end, the tide rushes through Caol Rona and out into the Inner Sound over shallows, making for some very steep waves. I set off to make short hops across the race while the others stayed a bit further out in calmer waters. It was rather fine paddling, but I was getting a lot wetter and colder than I really realised, and when we met up again to find a camp in a small bay tucked in the shelter of Rubha Ard Ghlaisen, I found that I was very chilled and had to get a tent up and get changed in some haste whilst I was still capable. We'd had a long and quite hard day, but a brew and hot food put some of the energy back 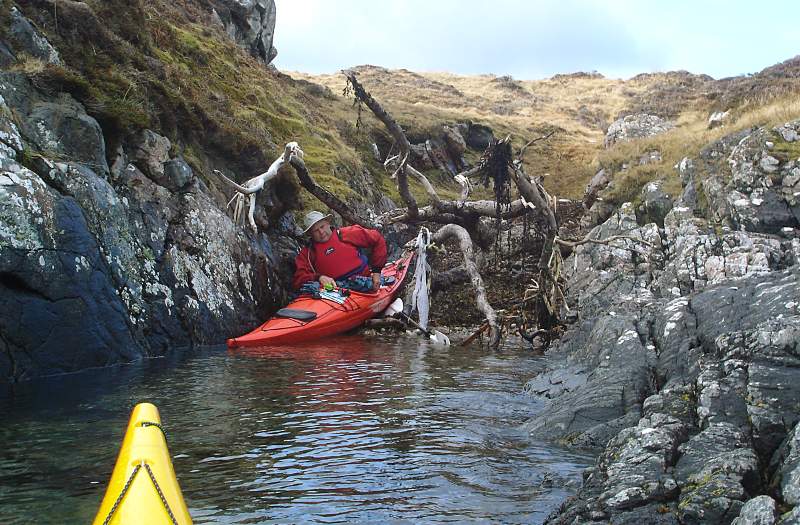 The tree wasn't in the way when the tide was out!

Sunday proved brighter, though still windy, as we wrestled with a large branch which, at this state of the tide, was very much blocking our narrow put-in. We now made much better progress down the east side of Raasay, trying to catch up with the others. We stopped for a brew and a look round at Brochel, a nice bay with a castle which, we later learned, was where the others had camped, finding huge amounts of firewood. Continuing south, the scenery is tremendous, with the great crags of Druim an Aonaich towering above patchy woodland, and some huge fallen boulders in the sea. The rock is a sort of limestone, giving the crags an impressive Pyrenean appearance, and the fallen boulders were fretted by solution in the sea - watch out for some very sharp corners. A small bay here provided my second otter sighting of the trip. 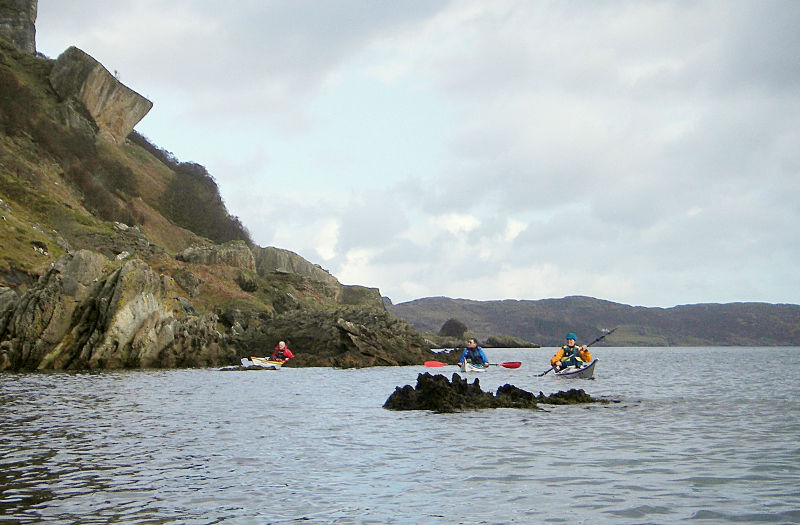 Limestone boulders on the east side 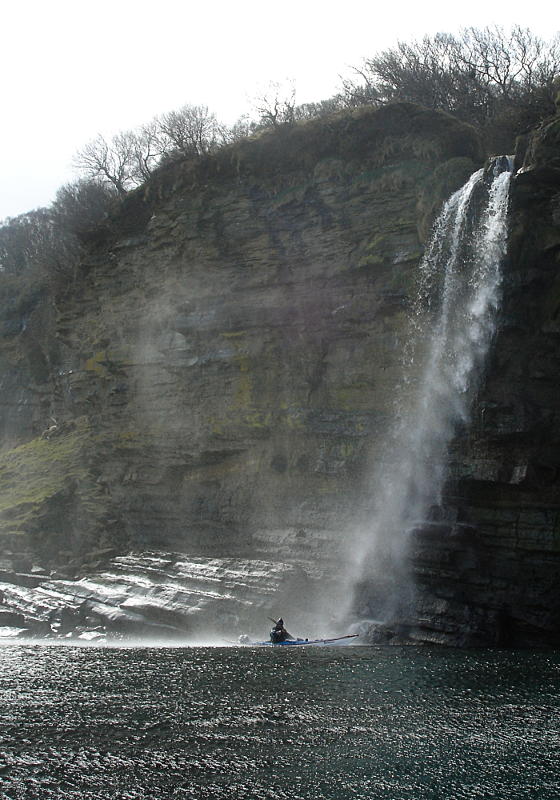 As we headed down the Sound, a large waterfall came into view ahead, with its column of water being liberally sprayed about by the still gusty wind. This became more impressive the closer we got and, as if we hadn't got wet enough yesterday, Richard felt the need to test his gear by paddling right underneath.

Soon after this, I was nearly capsized by a Golden Eagle. Leaning right back in the cockpit to watch as it soared over me, I was caught by a sudden gust of wind in a not-very-athletic position for doing a rapid brace. That'll teach me to concentrate on the job in hand !

Not much further south, we came upon the others all hauled out on a very rocky strand. They had determined that round the next headland the wind was much stronger and were having lunch while considering the plan of action. It didn't seem to be getting any stronger, and the best idea seemed to be to get a bit further so we could reach the road again. If the weather was too awful tomorrow, someone could walk out and bring a car across on the ferry to get everyone back to Skye. After a bit more paddling the main group started to look for somewhere to camp, now in drizzle. A splinter group decided that this looked a miserable place to stay overnight and that conditions weren't really too bad. A bit of negotiation found Jennie a place in a tent here, whilst Richard, Gareth and myself decided to carry on paddling across Caol Mòr to Scalpay. This was about half an hour of steady paddling with a beam wind and sea, but not too rough, so we maintained a tight group and were over to the slightly more sheltered Sound of Scalpay quicker than we'd expected. From here, the wind was less against us, with only the entrance of Loch Ainort giving us another short stretch of rough water before we made it back to the cars. 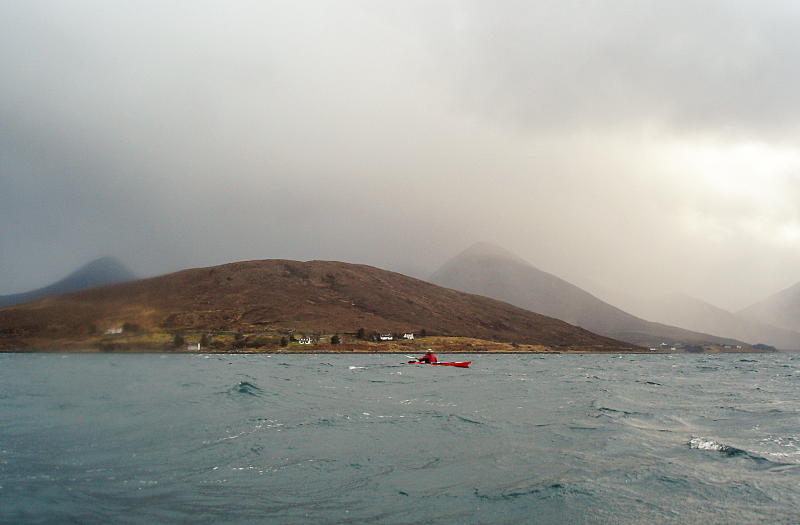 Heavy squall blows over the hills on Skye

The great benefit of the extra paddling was a night in the pub, and also meant that if the others decided not to paddle, only one had to walk out to be able to get enough cars to cross on the ferry. As it happened, the weather was a little calmer on the Monday morning, so the main group paddled across with no real difficulty, ready for the long journey home.

Crossing back from Raasay in better conditions