Across to Arran and Bute

With a windy forecast, Andy & Mary Waddington, Johnny Proud, Richard Wormald, Claire Taylor, Gareth Brown, Gareth Carson and Paul Willett assembled at Largs Yacht Haven bar before camping overnight. Come Good Friday morning, the wind was a bit less than the last we'd set off from here four years ago, but it was against us. 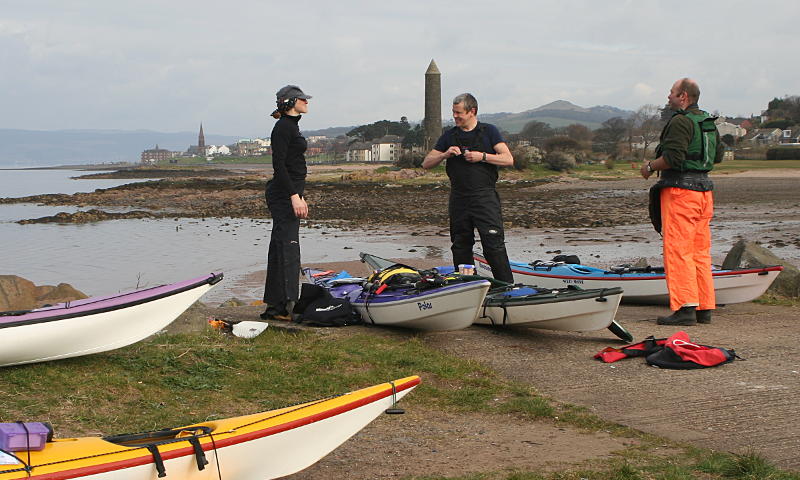 Getting ready to put on at Largs Yacht Haven.

Paddling out to the Cumbrae islands was uneventful, and we soon reached the small beach on the southern tip of Bute where we watched a huge submarine playing out to sea, accompanied by helicopters and some fast surface boats. Legs stretched, we set off for the longest crossing of the trip, to Arran, into a headwind which drifted us north of our original intended landing point. We eventually reached the coast, just below the leading marks for one end of the measured nautical mile used for sea trials. Not far beyond this, we called it a day at 25 km and landed on a shingly beach some way south of one of those ubiquitous caves used by Bonnie Prince Charlie in the '45. 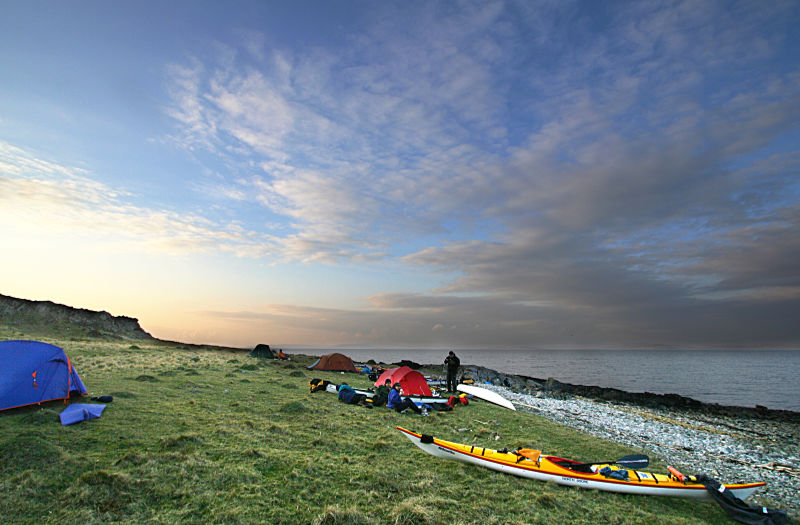 Camp on the NE shore of Arran.

This proved to be the best campsite I've ever seen in terms of available campfire fuel, and what started as a small eco-friendly blaze, soon got bigger as more (and merrier) folk joined in... 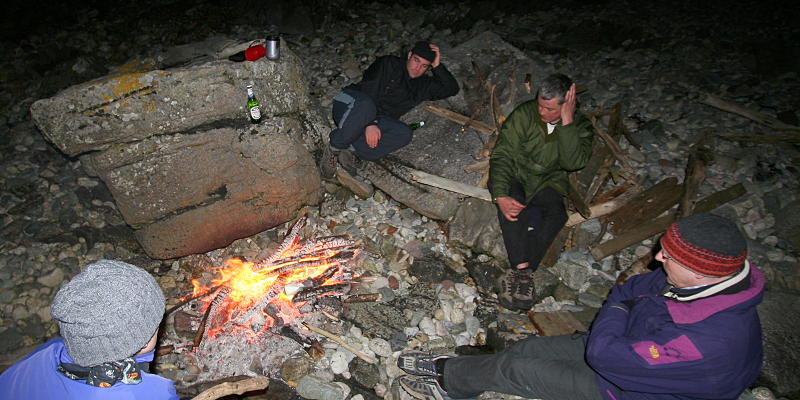 No shortage of firewood on Arran.

Easter Saturday dawned sunny and perhaps a bit less breezy as we paddled up the Arran coast and decided not to do the extra distance to include Lochranza. We headed off on the second crossing to Skipness, being carried noticeably northwards in the tide before landing at a nice beach for elevenses. A couple of hours pleasant paddling north got us to a suitable point to cross to the other side of Loch Fyne, to Sgat Mor, Sgat Beag and a beach on the mainland for lunch. 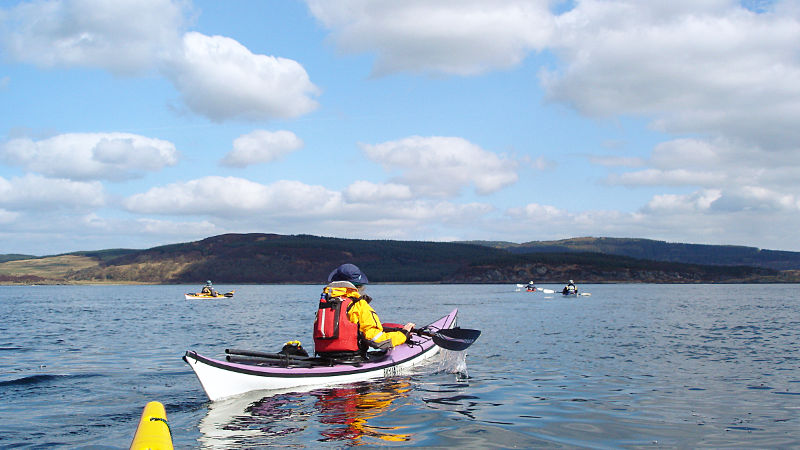 Another brief stop enabled a few folk to take on extra water before we headed down to Ardlamont Point and the final crossing to Inchmarnock.

Crossing back to Inchmarnock - Arran behind.

Here we stopped after a long (33.6 km) day and still failed to find the spooky bronze age burial in which a skeleton is supposed to be visible under glass. Not as much wood here, but still plenty for our fire to frighten away the marauding beasts which populate this island (no, not midges - highland cattle!).

Easter Sunday was again choppy and windy, and we crossed quickly to the Bute coast, then rather more slowly in beam seas down to the southern tip of the island where another stop in Glencallum Bay was not entertained by submariners (maybe they're wee frees and don't play out on a Sunday?) With a quartering wind and a steep chop behind, we variously paddled and surfed across to Great Cumbrae, through the gap and into the shipping channel past Hunterston. Here, our resolve to remain in a compact and visible group soon fell foul of the choppy conditions and fear of crashing into each other when surfing close together. There seemed to be very little traffic until a busy little RIB out from Largs was buzzing about between capsized dinghies. And so, after 27 km we finished the trip in three days after Johnny having expressed doubts about being able to get all the way round in four...

Additional notes on weather, tides, and route (choose "Round Arran and Bute" from the "Trips in Scotland" drop-down).