Wintry Scotland - the Orchy and the Leny

Some Orchy, then some more

Andy's Scottish weekend found water levels highish, despite most of the precipitation seeming to be falling as snow at the hostel in Tyndrum on Friday night. We decided not to even look at the Etive on Saturday, but headed for the Orchy.

The levels looked scary, four feet at the Bridge of Orchy, but the Allt Kinglass was pretty low, so the river lower down (at Witch’s Step) was not quite as big as Andy and Mary had experienced with Glenmore Lodge a couple of weeks ago. Nevertheless, the group felt a bit intimidated, so we went downstream to look at some rapids and ended up with all eight doing the Lower from the Falls or Orchy down to Catnish as a warm up.

That done, and all upright, we trekked back up and had a look at the top again. The level was down by a few inches, but still fairly big. However, by now we’d left Pete’s van at Eas Mor, so seven of us put on and set off to do the first half of the Middle.

Big Rock went alright (Michael rolled up, but my video was nowhere nearby, so it never happened, OK?) We had a quick reccy at Chicken Shoot, which meant that I got some bank footage, as well as headcam and boat cam. 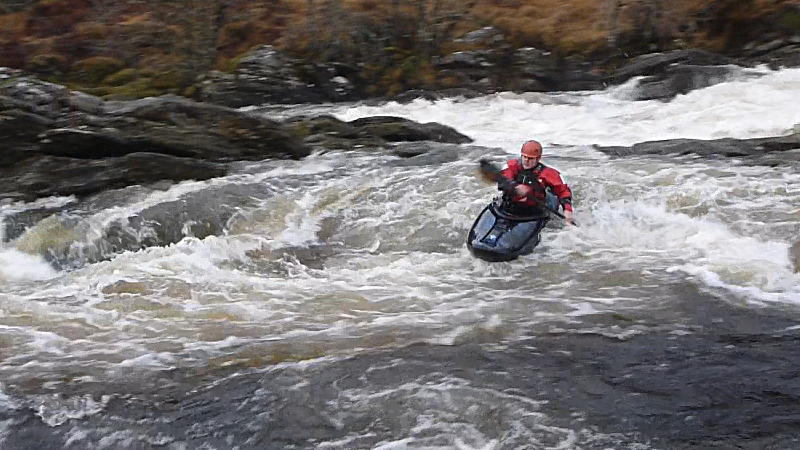 Lots of easy rapids between the named features – some even suitable for playing to the camera.

Next up, Sheep Trolley gorge, which isn’t a gorge and no longer has a sheep trolley. At this level, it’s pretty easy as there are fewer rocks to avoid, but the wave at the end is still pretty meaty, and today it had a second wave which was hit more slowly and necessitated a quick roll (in my case). 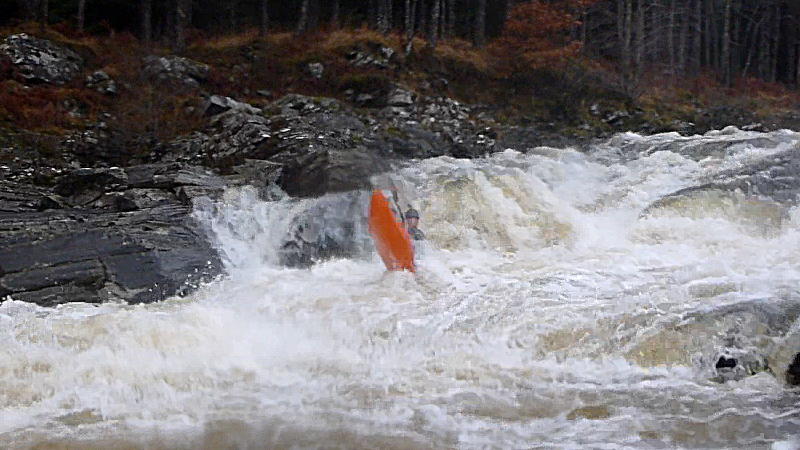 Not much further, and we took out above Eas Mor (as we didn’t have time to do the rest). All except Anthony, who ran the grade 5, then took out – a marginally shorter walk to Pete’s van.

Sunday saw us using the hostel's WiFi (whose password we had now obtained) to find levels on various rivers. The Leny was favoured as being a river few of us had done, and on the route home. Levels seemed to have dropped to well less than scary (1.1m on the SEPA gauge), so we were happy we'd make the eddy before the hard bit...

Let’s be up front here – I (and Mary and Clive) chose pedestrianism at the Falls of Leny and Mary still managed to cut her hand falling over rushing to do throwline duty. Michael did a really good job on the falls, but managed to swim in the gorge (the first time he’s swum from the Stomper). The easiest portage is on the right, whilst the best viewpoint is on the left, so not all the carnage got recorded to video, but I’m sure there’s enough for entertainment value…

The put-in is on slow-flowing water, but the river soon warms up to bouncy grade 2/3. As only Dave and Anthony had paddled this before, we were being a bit cautious and doing all the right things with eddy-hopping and river signals, but it still didn’t take long until we were dropping down to a big eddy on the right just above the falls. These would be very visible from the road (which I’ve driven many times) if you could stop, or were on foot, but the road is sufficiently technical at this point that I’d never actually seen the falls as one’s eyes are firmly on the upcoming tight bend at this point.

After a wander down the bank, Mary and Clive decided to portage, and were at the bottom to catch any floating debris… Anthony, being non-SOC, was declared to be a suitably expendable probe, and went for the right-hand fall (his third time on this drop) and, as on previous occasions, got swallowed up, mildly digested and regurgitated separately from his boat and paddle. Everyone else immediately decided that there was enough water to do the left hand side, and wondered who was expendable enough to be sent down that first... 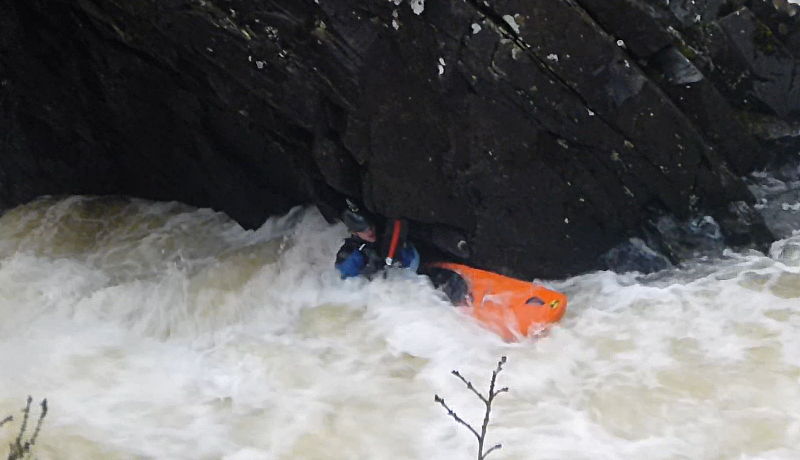 Anthony, having shot the big drop (off left of pic) just fails to clear the rock,
and will shortly be sucked into the nasty hole top left

First off were Alex and Pete. Alex dropped in, and when he reappeared to spectators, he seemed to be adding challenge by paddling the main drop backwards. He managed to turn round at the bottom and ran the gorge upright and rather conventionally forwards. Glancing back upstream, here comes Pete, the right way up and going forwards too, but that didn’t last beyond the stopper at the bottom of the drop. Pete’s first try to roll was quickly aborted as he concentrated on getting a good setup position, but this roll didn’t quite come up either. Spectators were all resigned to a swim, but his quicker third attempt got him back upright before the drop in the gorge, and he stayed up to the bottom. This looked more promising !

Dave and Michael went next. As soon as Dave’s boat appeared from behind the rocky island, spectators sensed that all was not well, since not only was it upside down, but was also heading for the rocks. Fortunately, the boat was protected from any impact by Dave hitting everything first and he was soon out of the boat and swimming. Michael, having seen none of this, now powered down upright and in control and made it into the gorge with time even for a (brief) brown claw. However, out of sight of carnage-hungry video cameras, he got it wrong on the final drop, and practiced breast-stroke to finish.

Anthony, having failed on three successive visits to the river, was now walking back up for another go, this time on the left. Alex, wanting to know what it might look like facing forwards, soon joined him. Anthony made only one error this time, and rolled up in time to run down the gorge successfully. Alex came down forwards, though spectators thought his line well over to the left might presage some more aquatic antics. Confounding the doubters, he charged down into the gorge looking good. Well, it’s good to know that someone can do it upright !

Below this, the river eases, with just one section where a bit of line-choice works wonders. Straight down the middle involves punching a meaty stopper, whilst those who ferried to the left high up could avoid that, make an eddy left to take a quick visual, then drop neatly into the eddy with everyone else. Michael and I managed this line best of the group, so it’s a pity that I then managed to need a roll breaking across the grade 2 water below. 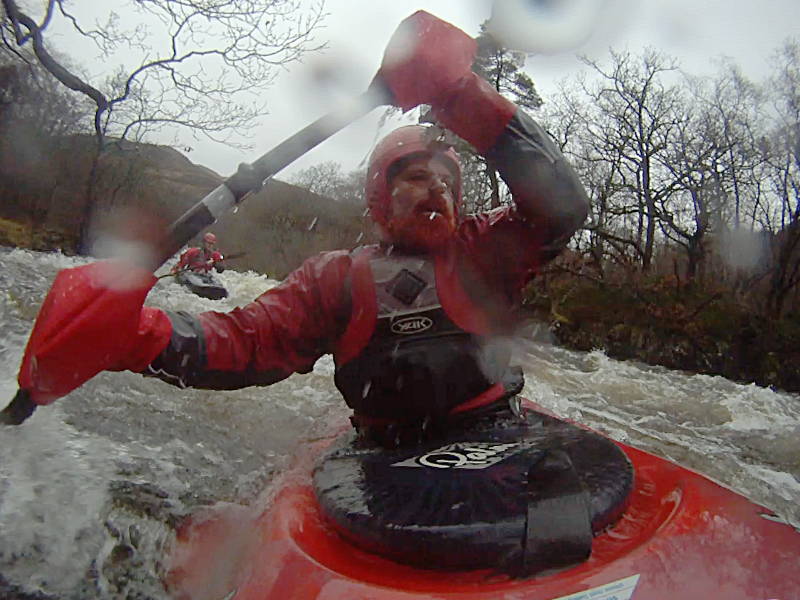 Off the water pretty early, cars shuttled, sandwiches eaten, Dave fed with Ibuprofen so he could grip the steering wheel (punching rocks out of the way never works in these sorts of rivers) and off home. We were back just after 5:30, so even had time to collect the dog!