White kids on the White Nile

Not many rivers round here... the short carry into Ringway airport.
Photo: Sarah Waddington

Despite our nervousness in advance, getting four boats through check-in at Manchester proved quite painless and we had our gear outside the front of Entebbe airport before our flight was supposed to land at 06:40 - Africa has never been this easy before ! Two hours or so took us to Hairy Lemon Island and afternoon saw us on the water for an eddy-hopping paddle upstream to the wave train below Nile Special and Club waves (Nile Special and Club being the stronger and weaker of the two local beers). Despite a relatively low release from the dam, the volume proved quite an eye-opener to those of us used to rock bashing down local Dales rivers... but the kids seemed to cope very quickly. 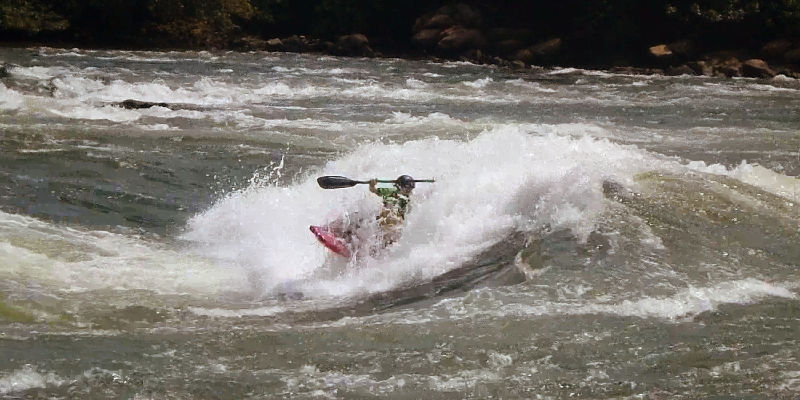 Next day we couldn't get a driver for a shuttle in the morning, so we returned to Club Wave where Michael was soon surfing with the best. Afternoon had us on a long flat paddle down to some class 2 rapids which caused us one swim, and then a bit of practice on the other channel with boils and whirlpools big enough to stand our playboats on end and spin some of us through 360 before having time to brace... Shuttle vehicles vary from big trucks to diminutive motorbikes, but we started at the big end: 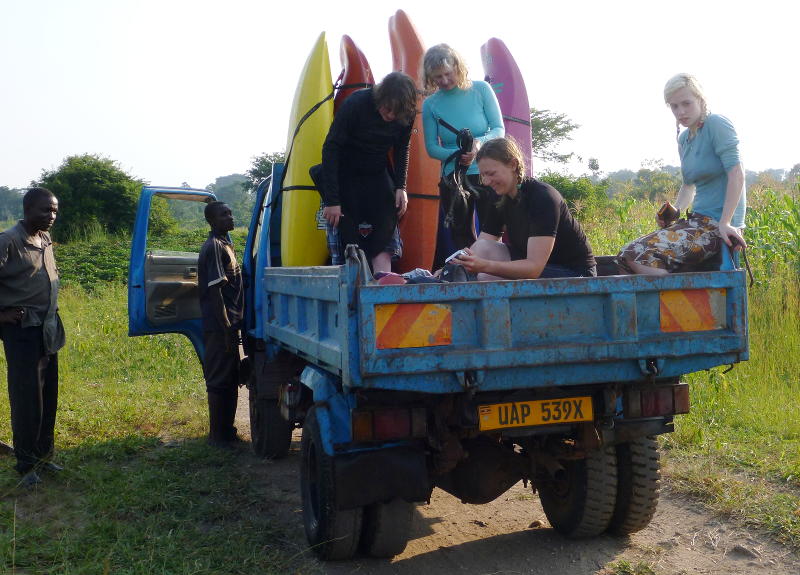 After this introduction, we moved from Hairy Lemon to Jinja, and paddled a short section below Bujagali dam, then parked-and-played at "Superhole", a somewhat less intimidating playwave with easier water below. 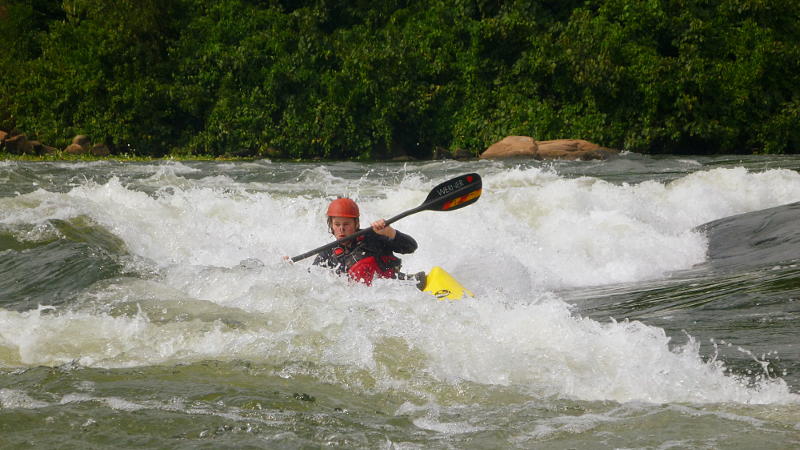 Michael quite at home on Superhole, White Nile

Then the heavens opened, as did some digestive systems, so a day off watching lightning followed. The days after this were occupied by a couple of paddles down from the Bujagali dam, and several sessions on Superhole. A feature of this spot, which is not quite park'n'play, is the short run down Bubugo - a grade 3+ rapid with a deceptively easy start. The water looks flat on the approach to a horizon line, where a tongue of water on the left leads down close to overhanging vegetation, avoiding a hole. But the flat water is full of boils, a bit too far right and these send you out towards the hole, and just as you are paddling against this flow, the water changes and tries to kick you into the branches. If you hit the tongue, you want to keep on its right side, but the first big wave keeps changing, sometimes breaking on the right, so the temptation is not to go too far that side. Over that first wave, and ahead the water crashes into a rocky outcrop dead ahead, so start heading right with some urgency, otherwise the curling wave off the island will get you ! Needless to say, this combination had most of us upside down on at least one occasion, and some of us several times, but I don't think any of us swam here.

The other feature of this bit of the Nile is the crowding by small black children wanting to carry your boat for a small fee (USh500 - about 13p). Having carried your boat down to the water, they then spend a happy hour or two playing by the take-out waiting to carry it back. It's a slight challenge to ensure you get the same porter on the way back, and sometimes they've had to go home, so there's a clamour to be the replacement... And as a perk, most of the kids want a go in your boat ! 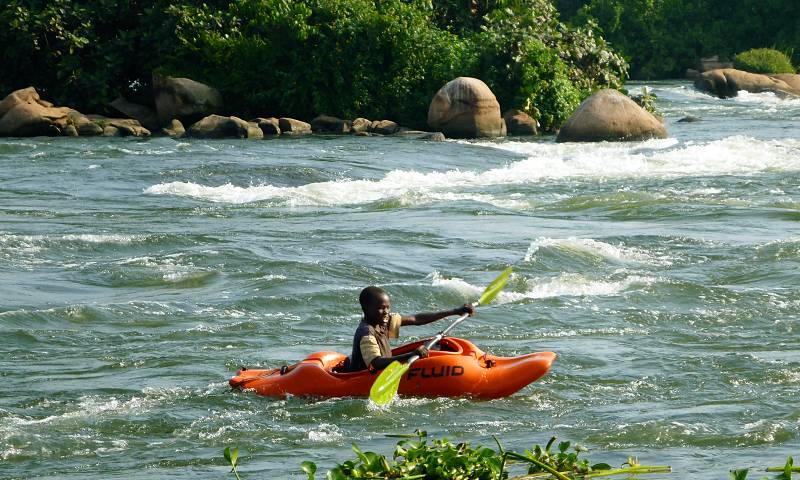 Having got ourselves confident on Superhole, it was time to head back to Hairy Lemon and the bigger waves there, but the best way downstream is to paddle. The old Silverback section (hard, and now submerged by the Bujagali dam), Overtime, Bubugo and Superhole, followed by Itanda (or Hypoxia or Kalagala), more hard rapids where the river is split by islands, formed Day One of long guided rafting trips. We planned to paddle Day Two, putting in below Kalagala falls and paddling five main rapids down to Hairy Lemon. We had Dave Brown with us as added support for this day, and watched in some awe as he styled Kalagala Falls, a huge volume, grade 5 drop into seething white foam... 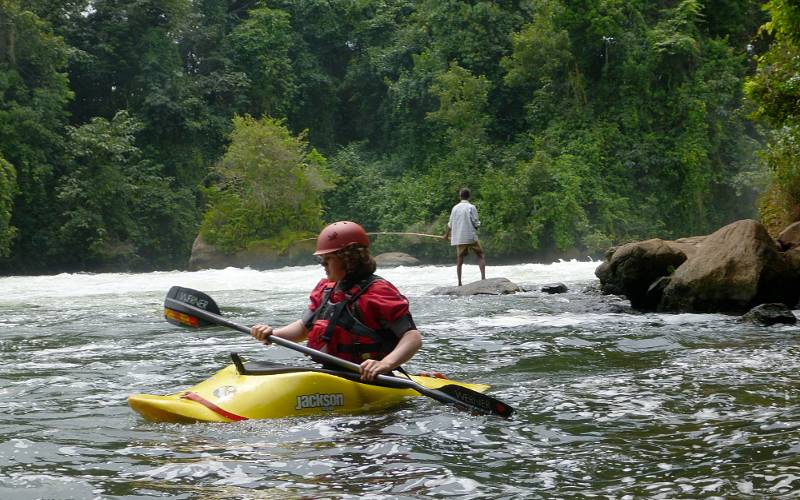 We put on river left below this monster, in a calm eddy. Then break in and head down a still quite substantial rapid. Michael found a little pourover on the way across and decided he'd have a quick surf. Several rolls and a lot of frantic paddling later, he managed to escape from this grabby stopper and continue downstream. I came at the back and didn't see too much of what went on above water, but did manage to roll up second go, and break out left, to see Mary being fished out of a swim in a big eddy river right. 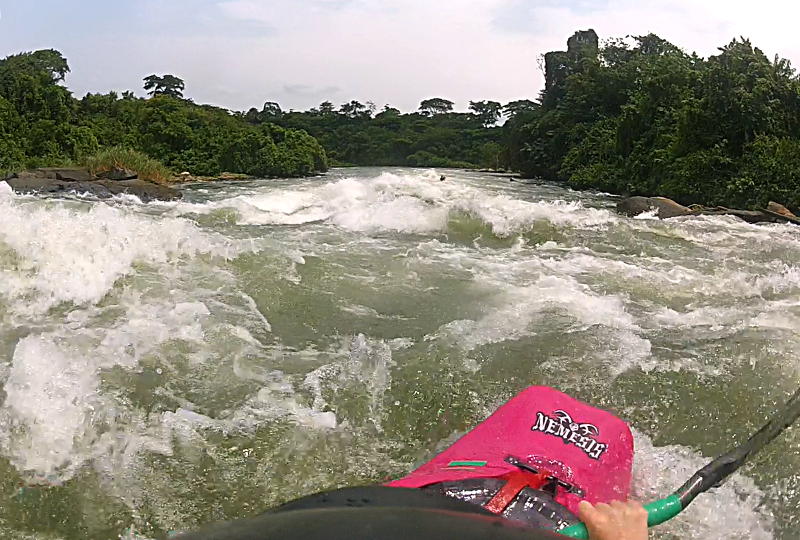 View ahead, thirty seconds into the trip - there's no easy warm-up wave before you're
straight into this stuff - in a playboat ! Photo: Sarah Waddington

Regrouping, we paddled down easier water, as the three channels rejoined. The next rapid is a long one, Vengeance, starting from another one of these flat bits of water full of deceptive boils. I fiddled on with my headcam and started down a bit far right, saw the evil hole in time and paddled like hell to just skirt its left hand edge. Phew ! Still, the rapid had me lower down, and I managed to roll up on a long tongue between the two bigger sections of confused water, got over the first wave of the second section and got caught on the eddy line on the right. Since everyone else had broken out left, and I was getting to be some way downstream, I had to paddle across the big standing waves to get back to that side, but the eddy line would not let go ! 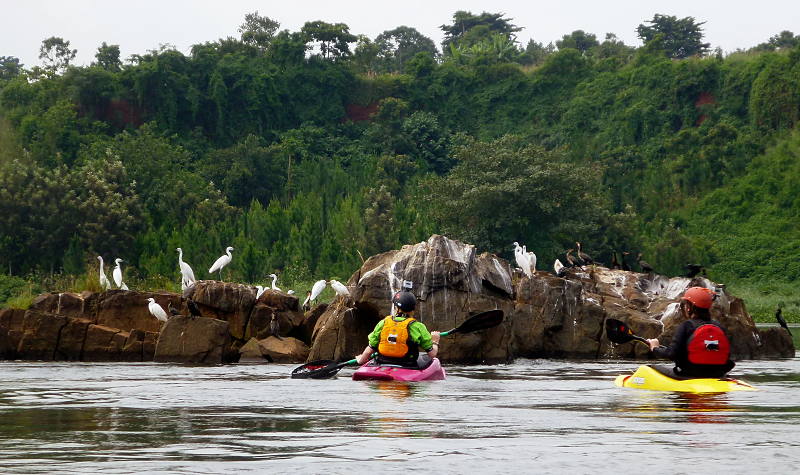 Between the big rapids are long flat sections with plenty of wildlife interest for kayakers drifting past
Photo: Andy Waddington

The third big rapid is Hair of the Dog. This is definitely easier, though quite long - we all stayed upright here, even when I got caught on the eddy line and Dave paddled into the back of me. The fourth is Kula Shaker, which has some good clean surfing waves above the main rapid - if you have the nerve. Into the meat of the rapid, and everyone ahead of me looked fine, but a big wave spun me round and knocked a contact lens out of place, so I couldn't see where I was going. Fortunately I blinked it back in place just in time to see I was heading right at another of these big rocky outcrops. Everyone else had gone left of it, but I could see I wasn't going to make that, so headed down the right, which was in fact easier, but longer.

There's now a long flat section interrupted by an easy playwave, then a few easier rapids, bouncy but unthreatening, leading down past the island where Steve Fisher has his house. This would all be very relaxing without the knowledge that just ahead is the Nile Special wave, followed by Bell, Club and a continuing wave train for some distance - a rapid classed grade 3+ but bigger than anything we'd paddled before. Named rapids are always scary, but rapids with individual named waves .... so we got out for a look from river right. 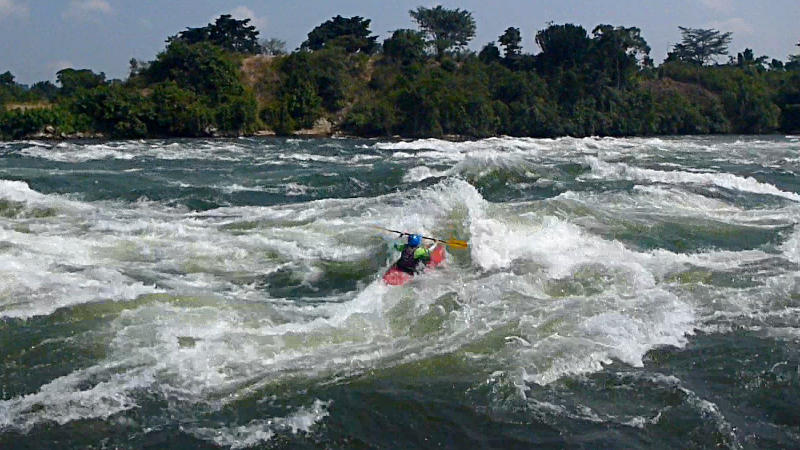 Mary paddling down Nile Special early in the day -
before the level gets up and the waves get big ! Photo: Andy Waddington

What's big, and the line to take, depends on the river level, generally higher later in the day. At the level we had, the line was down the right hand side of Nile Special, through Bell where it wasn't breaking and onto Club (or skirt it right), then break out right as far down as you please. We all made it down upright, I don't think anyone even had to roll ! After this, it was a relaxing bit of playing about and easy water back to Hairy Lemon, where the rest of our kit had arrived by road. Andy's video for the club photographic competition shows our Day Two run.

More days now playing on these bigger waves, and a couple of days later we ran Day 2 again (this time I rolled up on Vengeance just in time to hit the second group of big waves sideways, and ended up swimming). We also ran Nile Special rapid repeatedly, by different lines. On a morning run in lower water, I followed Lowri on a line left of Nile Special, which was meant to take us into a long tongue avoiding the main waves. Lowri got this right, but I had failed to appreciate that I needed to keep paddling further left after passing Nile Special, and soon found myself looking down into the biggest hole I've ever had the misfortune to find unavoidable. Spectators claimed I was looped at least four times, but I think this is an exaggeration, and the video tends to agree with me. However, it did take a while and my first roll attempt was right on top of Club Wave (observed by Sarah who had managed to take evasive action and just skirted the hole, but still got turned over a couple of times). Needless to say, air ran out and I swam again. 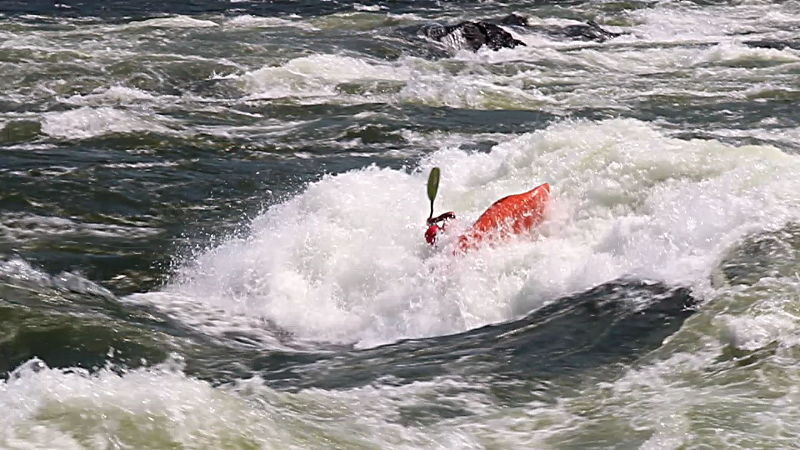 Andy meets Bell wave - at this point he has gone as far up the wave as he is going and is just starting
to back-surf into a thorough washing-machine experience. Photo: Michael Waddington

Unfortunately, we never quite got Nile Special at a level where it was easy to get on, and whilst the kids surfed Club wave for ages, only Michael got close to Nile Special and it kept on kicking him off its shoulder without ever getting to the sweet spot further over. Maybe we'll have to go again - indeed, there is a plan to return over Christmas 2013 ! 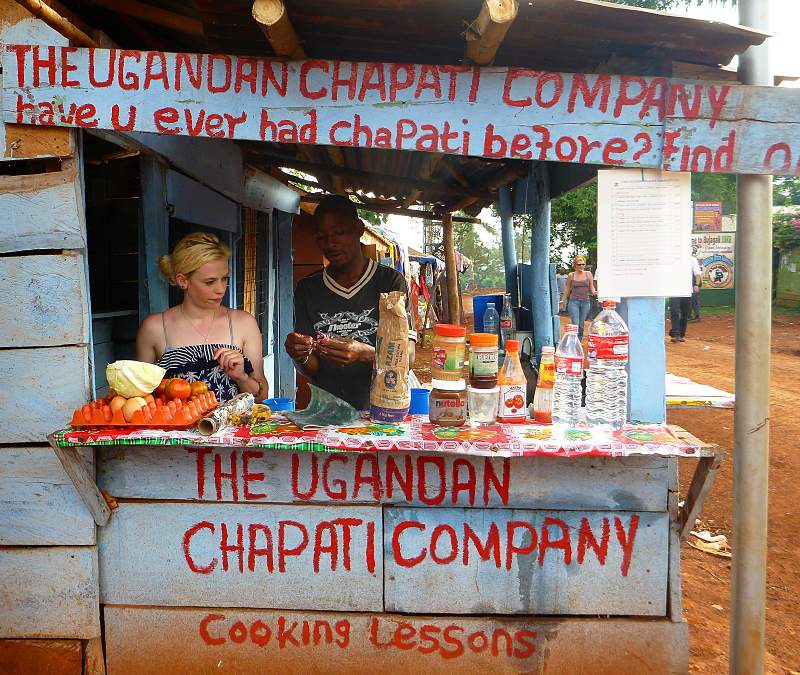 We followed up with some relaxing Safari (if you can call hacking through Bwindi Impenetrable Forest on foot in pursuit of Mountain Gorillas relaxing...) and were reunited with our boats at Entebbe airport for an equally easy return flight a week later. There's now a longer video of the trip, showing all the rapids we paddled, as well as some park'n'play.