by Sue Sharman and Andy Waddington

The morning started grey and rainy so Mary and I nipped down to have a look at the Tees. It seemed up but not too up so we were on. Andy and I set out for Hexham peering carefully at every river we crossed and becoming increasingly worried by the number of cars with boats on going the other way. However we arrived at Tyne Green to find the water up but not too up. Rounding everyone up was more fun but finally we all piled into Andy's car, having loaded his commodious roof rack, and set off for the put-in. However we didn't get very far – a helpful motorist flagged us down pointing out that the nearside rear tyre was very flat. We then found out how many canoeists it takes to change a wheel. Answer five – three to do it, one to record it for posterity and one to eat a Mars Bar to keep everyone's strength up.

Barrasford was looking quite exciting. We put in and four of us crossed to the far bank, then shot the rapids in fine style, re-grouping at the bottom to look for Tom. He appeared, confessing he'd got swept away. We then spotted the first swimmer – one of many to come. Uneventful run down to Chollerford Weir. This was very crowded and was sporting a weird little eddy behind the bridge pillars. A number of people ploughed into the trees at the bottom of the weir and quite a few more swam. We all descended safely and were then treated to the sight of someone stuck on the concrete walls near the centre of the weir. How they escaped I cannot tell, as we carried on.

A little further on, we noticed we were missing Andy W and Tom so we pulled over to wait. They eventually re-appeared with Andy looking a little damp. He'd been so busy trying to get onto a playwave that he forgot about staying upright. He then proceeded to rescue himself by towing his boat with his teeth while paddling backwards leaving Tom feeling something of a spare part. 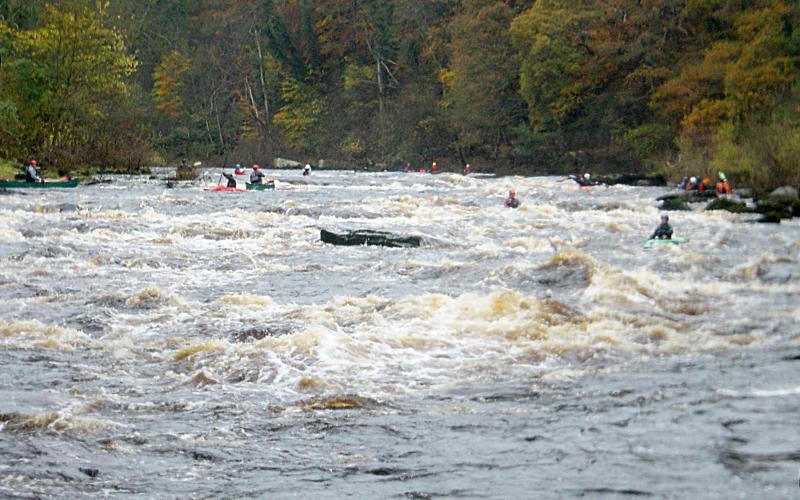 Warden gorge on an earlier trip with less water - are you surprised there are no photos from an epic ?

On then to Warden Gorge. The water was so high that anything went at the top. We then continued down breaking out to look down the gorge proper. All we could see were masses of huge waves and holes. We set off – I think I got further than last time but eventually this huge hole opened up in front of me and the wave smashed down on top and the inevitable happened – swimming again. I bobbed up in front of a line of helpful types with throw lines. One landed perfectly so I dutifully grabbed it only to be dragged straight downwards so I let go again. I was then collected by a very cheerful young man who had obviously been practising his "keep your victim calm" routine as he asked me my name, where was I from and what was my favourite hobby. Andy W said that I should have said "breathing" for the latter. I was eventually hauled to the side by a very merry bunch of students practising live bait rescues. I trudged down the bank looking for my boat and was just thinking it had gone to Hexham without me when there it was and Andy W who had also had a swim. The people who had rescued my boat said it had half a tree in it when they caught it and that the river had come up about 5 feet just since they had been at the gorge. Andy and I decided we should go and look further down for the others but had no sooner set off than Ann hailed us from the shore. We piled into the eddy where she was with Andy F and Tom's boats. They had gone to watch the carnage upstream. Ann too had had a swim almost at the bottom. Upstream the chaos was unbelievable. People had given up shouting "swimmer" but were just yelling "there's another one!" One group of twenty had only four survivors at the bottom. We spent quite a while rescuing boats, paddles and other assorted bits of kit and reuniting them with their owners. More distressing was the number of trees and large pieces of wood that floated past.

When Andy and Tom re-appeared we carried on downstream. The South Tyne was running very full and the graffiti on the road bridge was slowly being submerged. We then turned the corner and there were the piers of the old railway bridge. They didn't tower majestically above us but were only showing about 1 metre worth out of the water. The huge waves between the piers provided a very sporting passage.

Further down Tom found a log which he decided to take home as a souvenir. He put it on the front of his boat where it caused him a few wobbles. The last leg down to Hexham went very quickly. Going back over the bridge to the car we could see that the three stoppers in the middle of the weir were now one smooth green (or in this case brown) wave and the whole thing was being washed out. Andy calculated that the water had risen over 2 metres during our trip. We were later told that the water was pouring over the top of Kielder Dam and that they were not letting people on at Barrasford.

All in an excellent day's paddling with thrills, spills and all kinds of excitement. Warden Gorge is still in the lead (2-0 at the last count) but I'm gaining on it. Next time.....

Johnny's Upper Wear trip was relocated to the Allen, meet at Cupola bridge at 10. The guide says it's wet enough if water is flowing under all three arches, but once the first five paddlers had met up, Johnny and Richard reckoned it would be too much of a bump and scrape, so mobile phones were poked and the nearest low-water alternative was on the cards. Which, in this case, meant the North Tyne. However, deja vu was avoided by the level being well below last week's and the weather being sunny. Chollerford is the normal put-in, and the weir almost claimed another victim as Pete Ball erroneously set off down it backwards, tried to turn round and hit the wave at the bottom sideways. But he rolled up, pink-faced, and off we went. 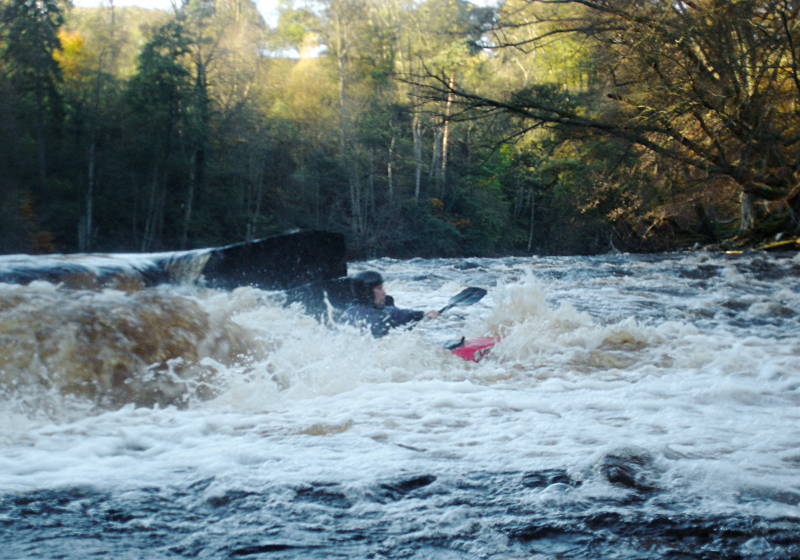 As Johnny predicted - it was a different river. High enough by normal standards, but much more relaxing than last week's frenetic pace. On the top drop of Warden gorge, the middle line provided entertainment, whilst on the main gorge, it was possible to ferry glide and pick a line, and even, at times, see over the waves ! Helen demonstrated a successful roll, and I didn't - drat and curse it ! The early survivors helped rescue a boat from another group, pinned on a rock which was covered by a metre of water last time... and we had to paddle all the way to Hexham.