The group of paddlers, including Pete, Clive, Alex, Iggy, Don, Ann and Andy (a newcomer and refugee from the flat waters in the South)  met at the sills to decide our plan of action. Pete had originally put this down as a trip to Cumbria, and the Kent was still a possibility. We decided against a trip to the other side of the country as levels were low and the Tees was clearly in a good condition. What is more, the mist had just cleared and the sun had come out.

After changing and shuttling cars, we were on the water, everyone taking full advantage of the small waves on the way down. We reached Abbey rapids and eddy hopped down the upper part. Alex, who was at the front, got out to put on protection, leaving Clive to lead the next section. Alex later admitted that he could not remember the line so used protection as an excuse not to go first. Don went next, but after disappearing over the drop was next seen swimming in the gorge, and was rescued by Clive.  I went next, but did not hit the stopper at the bottom with sufficient force and capsized, grating my knuckles on the rocks while trying to set up for a roll. I was very impressed that I managed to roll up as I had had a very depressing time in the pool the previous Friday, trying to do the same. The rest of the group came down without incident. Don, who was back in his boat, did a roll to prove he could still manage it.

We continued on down the gorge, but a bit further on Don tripped over an eddy line and needed to be rescued again. We made it down to Whorlton without incident and spent a little time there as some people wanted to get out and do it again.

Ann running the drop at Whorlton 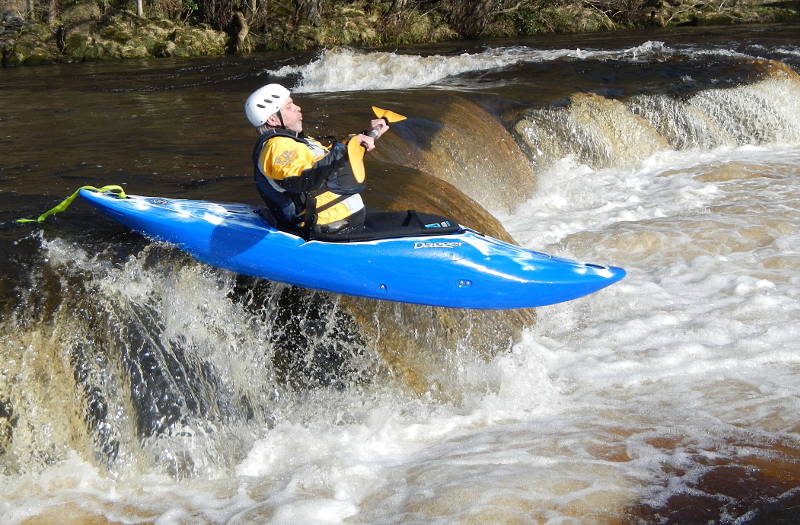 Don running the drop at Whorlton

When we got to the long sloping rapid with a big stopper at the bottom, we all had a go at the little waves, but Andy, our new boy, showed us all up by taking his little play-boat into the big one. At the next series of stoppers, Clive decided, after watching Andy play in it, that he would give it a go and moved in sideways and across the wave before turning downstream. I decided to try the same, thinking 'what is the worst that could happen to me – my hair is already wet.' As I went into the wave, I could see that the back of it was very steep, and as I turned across it I leaned downstream. However, I continued to lean as I went over the top of the wave, and rolled over the back of the wave and upside down. I managed to roll up, but only on the second attempt. 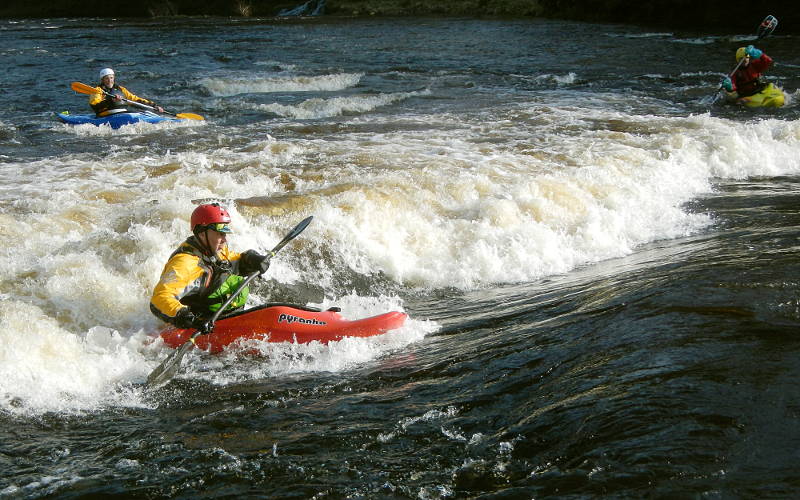 Everyone having a go on the Grafts Farm playwaves

I felt a bit of pressure at this stage, as Don and I were equal with regard to capsizes, but we were not far from the end which limited the potential for disaster. With Winston bridge in sight, I followed Iggy over one of the drops, but failed to compensate for a shoot of water coming from the side which knocked me against the rocks and took me over. I rolled again, but only after a second attempt. Pete, clearly concerned that I was not having a good day, tried to point out the best way over the next drop which was barely 18 inches high. As I went over I was taken out by a small riffle and had to demonstrate my roll yet again. I was so embarrassed by my performance, I had to accept that even though I had not swum, I had to be regarded as wobbler of the day, and offer to do the write up.

The trip ended, as all good trips should, in the café.