Penny was running a joint Durham/SOC trip to the Kent, and the level had been quite high a day or two before, so looked likely to be running higher than our usual dead-low fallback trips for a change. The EA gauge at Sedgwick showed 0.65m and this proved to be a really easy level to run the river – no big stoppers on Scroggs or Sedgwick weirs, and nothing too chunky in Old Mill rapid, either. Ten of us met up in Kendal, finding parking in rather short supply, but we managed to squeeze in (“unloading” is allowed on yellow lines…) for long enough to get everyone kitted up.

The shuttled drivers reported an enormous number of cars at the bottom, so we expected there’d be other people on the river. We caught up with a big group from Manchester Uni. at the top of Old Mill Rapid. No-one seemed to be running anything, whilst there were loads of people out on the bank. After chatting with these guys for a while, nothing seemed to be happening, and I couldn’t see our lot, so I dropped down to the eddy opposite the broken weir. No-one had actually run anything !! So I ferried out and dropped down the first drop and the next wave, eddied out and popped up river left with camera and throw-line, after which things started moving a bit more. Soon we were all down, and the students started coming. Some ran in fine style, but didn’t seem to have much idea about rescues whilst others were doing a lot of swimming. We pushed boats and paddles to the bank and all the swimmers seemed to have been landed safely, so it seemed a good time to leave!

We ran the Sedgwick weir far right (despite some initial reluctance – there really wasn’t much stopper and I’ve run this before with a lot more water) and the gorge went pretty easily. At the L-shaped drop, there seemed again to be some reluctance and an accumulation of folk in the eddy left. It didn’t really have room for nine of us (Penny had decided to get off and not run the last drops), so someone needed to get on and run it. I boofed a little further downstream than really needed, so it was a bit scrapey, but everyone followed pretty much my line and we were soon all down. There was no debris on the final little weir (often burdened with branches) and I landed river right to see if I could get to the central rocks to signal people down. No chance ! So I got back in my boat and we all piled over at suitable intervals, with just Iggy needing a swift roll in the big aerated pool at the bottom. 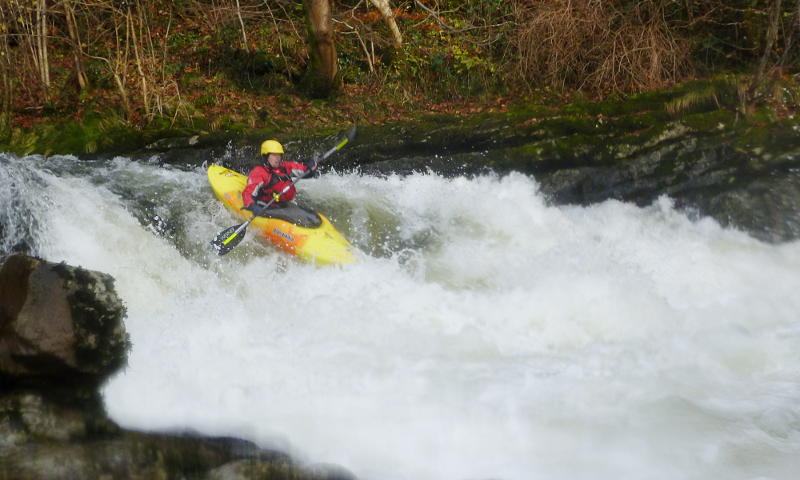 Iggy on Force Falls - the last drop came as a slight shock for some...

Bright sunshine, the water not too cold and at an excellent easy level – a blast !