Will the 2009 summer be wet again ? We've certainly had a dry spring, and the total lack of water meant that the Swale Charity Paddle was cancelled for the first time since Foot-and-Mouth. May 6th is definitely "summer season" in Swaledale, with leaves on the trees, primroses and bluebells out in the woods, and tourist traffic on the roads. But water is where you find it, and with an overnight deluge, the Tees was right up (too high to play on Abbey Rapids) so I decided that the Swale owed me a trip this year. On the water at 11:40 with a couple of inches over the concrete base of the bridge pier at Grinton and the river was at as nice a level as I've paddled it. No-one to complain, and a bit over an hour and a half later, I was at the bottom of Tree Rapid and shouldering the boat to return to the road and a rathery blustery cycle ride back up the dale to retrieve the car. I know of two other people who paddled the river later in the day (right down to Richmond Falls). By the next day the river was in full spate and paddlers were out from Richmond down to Catterick. The river was still high enough for another trip, right down to Richmond, on Saturday. Maybe the days of fiercely fought access battles are behind us at last ?

Another week, another downpour - at least for our members in Leeds. The rain was caused by Caving Section booking a Birks Fell Cave permit, but it proved to be a bit less enthusiastic further north, the Tees didn't come up that much and the Greta was definitely looking low. The plan was to paddle the Rawthey, which was looking unlikely, and so it proved, with the fallback to the Lune also at characteristic "It's summer, you fools" sort of level. But a short jog further on found that the Kent was higher than last time the club paddled it in the winter, so once again, we had an excellent summer river. Three river trips in eleven days in May and, yet again, no-one moaning at us that canoeing wasn't allowed ! 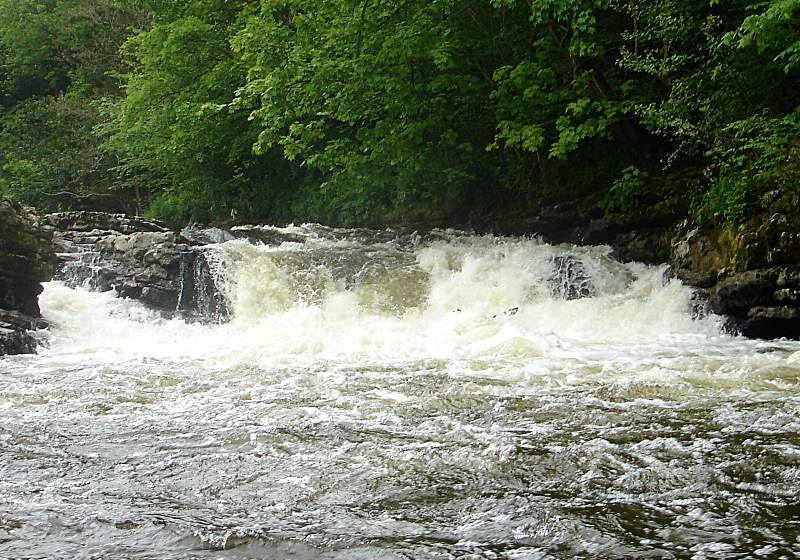 Not a bad level for summer ! The bit of paddle sticking out indicates where Pete is in the aerated water...