We met at Westwick Lock, which has a large grassy parking area. Environment Agency notices ask canoeists to use the jetties to get in and out of the river. However many of these are quite high and difficult for paddlers and at Westwick there's a beach which makes a much easier get-in.

Rivers are all running low because of the extended summer weather and it's still mild this morning on the last Sunday in September.

Helen would be paddling tandem open canoe with Debbie. Paul and Alison started off in their open canoe with Izzy in sea kayak. Ralph had rescued his old double touring kayak from the garden and I jumped in with him. Our team of seven headed downstream, enjoying the scenery and avoiding the quite regular motor-cruisers tootling up and down. 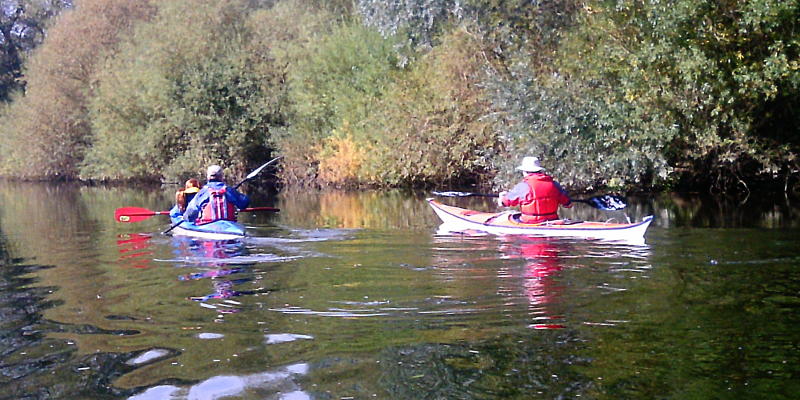 Usually, on a there-and-back paddle, we would go upstream first and have an easier return but since the current was hardly visible we reckoned downstream would be OK. We were on the water about eleven O'clock and Izzy paddled solo all the way to Boroughbridge. That’s pretty good for a nine-year old! The lock is a short distance after the 'new' road bridges in the town and this was a portage and our stop for lunch. A few walkers cross the river here and Paul explained that we were on the Swale Way, a long distance (124 km) footpath and although we were on the River Ure, the confluence with the Swale was just a couple of miles downstream. 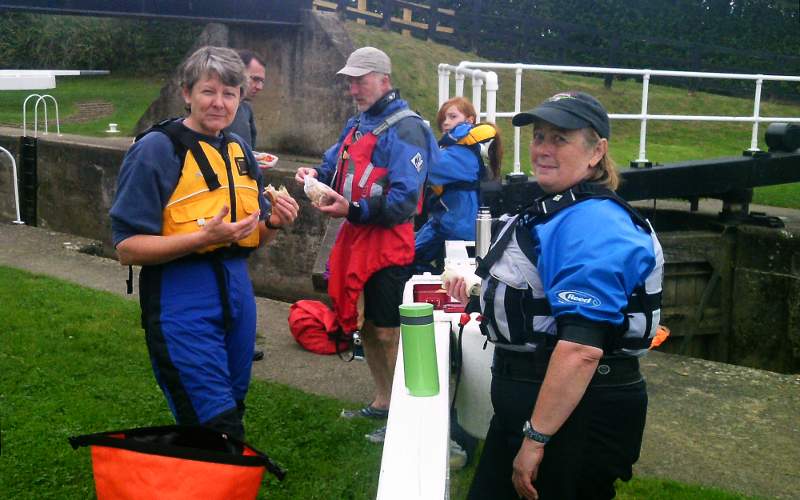 We got back on below the lock and it was tempting to continue downstream to meet the Swale but it was 2 O'clock, so we turned round and headed back upstream. Debbie reckoned we might be able to get back up on the river below the navigation and so we didn't get out at the lock again but stayed on the lower channel. It soon shallowed and we had more current to contend with. One section was a bit tricky and some wading was needed. To make our get out we needed to cross the river under the road bridge where there was quite a good flow and some shallows too. Helen and Debbie made it look easy but their shouting made us realise they had put in a bit of effort. We'd had a swap round and Izzy was now in the double kayak with me, Alison in her sea kayak and Paul paddling with Ralph. We all made good lines against a strong flow and landed on the island between the two sections of river. It was warm, we had all paddled hard for the last half-hour and now the sun was out so we had a welcome rest before walking the boats across the car park to the canal section. Going back upstream from Boroughbridge we could just feel the current against us but we had swapped round again and Izzy in the double with Ralph seemed to float effortlessly ahead of the group. 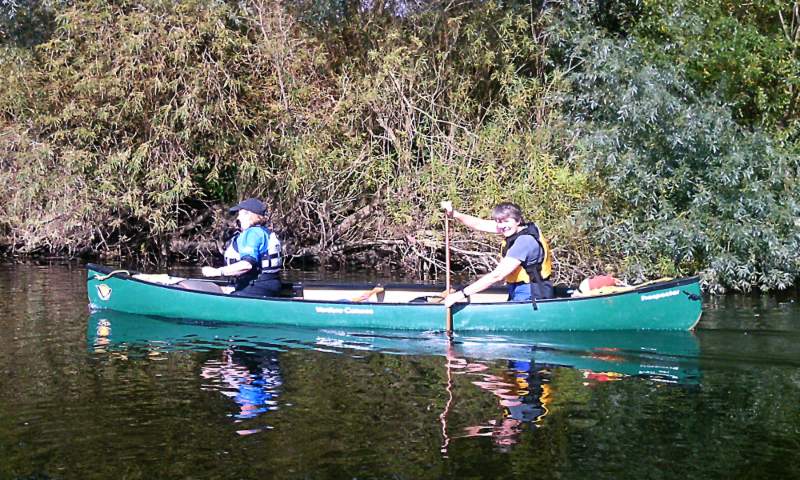 The sun was still shining when we got off the river about 4pm. Many thanks for a super day to Helen and Debbie; Paul, Alison and Izzy; Ralph and his star double kayak which was a lot of fun!