On Sunday the 7th of February, a group of six brave people took to the river. Those six were: Andy Waddington, Mary Waddington, Sarah Waddington, Doug Florence, Rosie Florence and John Flitcroft. However melodramatic this may sound, the river was unfortunately low and it soon became clear it was not going to be quite the adrenalin rush of a trip we had expected. Beginning with the long walk down to the river, we arrived and cheerfully got onto the river. We immediately realised that our boats would lose a good amount of plastic on the trip and set off with slightly grim faces as we bumped and scraped our way down the first rapid.

After a rather disappointing start to the trip down a number of shingly, rock infested rapids we eventually got to more exciting water. The first mildly interesting rapid was one that curved sharply river left round the corner before turning back right again. However the main obstacle of the rapid was a rock that happened to be perched near the middle of the rapid and threatened (although only slightly) to tip the paddlers in. After a few wobbles as we gained our balance, we all made it safely down. The next few rapids were of the same sort of variety, mildly interesting with a few rocks and waves to add interest. One of which managed to completely submerge me in my short boat and I received a face full of freezing water, whilst every one else besides Rosie managed to avoid this in their larger boats. 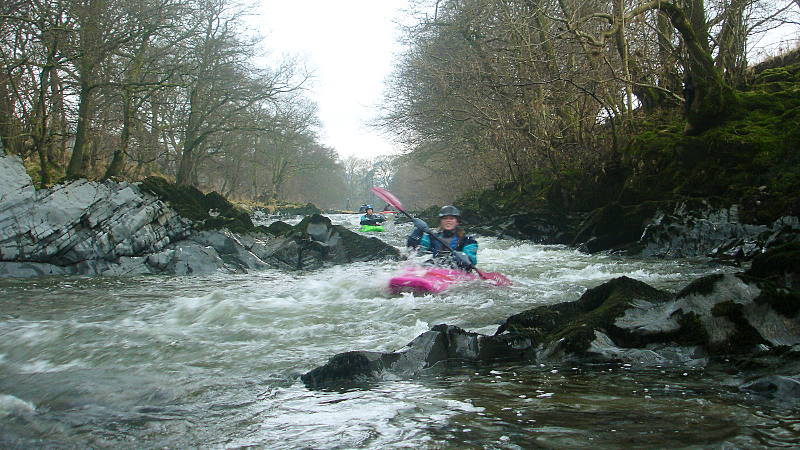 Bouncing down a gorge

The river then began to thin into more of a small gorge with steeper sides and (at last) deeper water. This meant that we began to pick up our pace travelling quickly and stopping rarely which was a benefit of the small group. Eventually we caught up with a larger group in front of us going down over a small waterfall like thing, I wouldn't really describe it as an actual fall as it seemed almost empty of water to fall over it. Any way, we had been planning to get out and inspect but the group in front still had every one in position to point every one in the right places so we scuttled down the far left side and plopped into a small pool at the bottom. On reaching this pool I was greeted with the friendly sight of a few friends from Aldwark grinning at me from under their helmets. After a quick chat with James we continued down with our spirits once again high after the small spot of excitement and the anticipation of the upcoming grade 4 rapid.

However, on arrival we climbed from our boats to inspect. As we walked down to get a good view of the main area of the rapid another friendly yakker from a different group told us there was a log in the way and we would be best to portage. 'Oh dear.' So we wandered on down to peer at it anyway and confirmed the presence of the log. A rather large log I may add, blocked the main channel in the trickiest part of the rapid. By this time the Aldwark crew had arrived on site again. They all wandered over and after seeing the log, two guys, Lee and Chris, climbed straight into the freezing water in their dry cags and began trying to shift it. After a few minutes they shouted for some one to throw them one end of a throw bag to tie around the top of the log. Whilst they heaved and pulled and shoved and strained, Rosie and I criticised their technique thoroughly enjoying watching them getting cold and wet as you do in these situations. We surmised they were pulling the log from the wrong side of the river and therefore in the wrong direction only making it worse. However we were unwilling to go and lend a hand and get wet ourselves so simply contented to enjoy the entertainment and eat cookies. 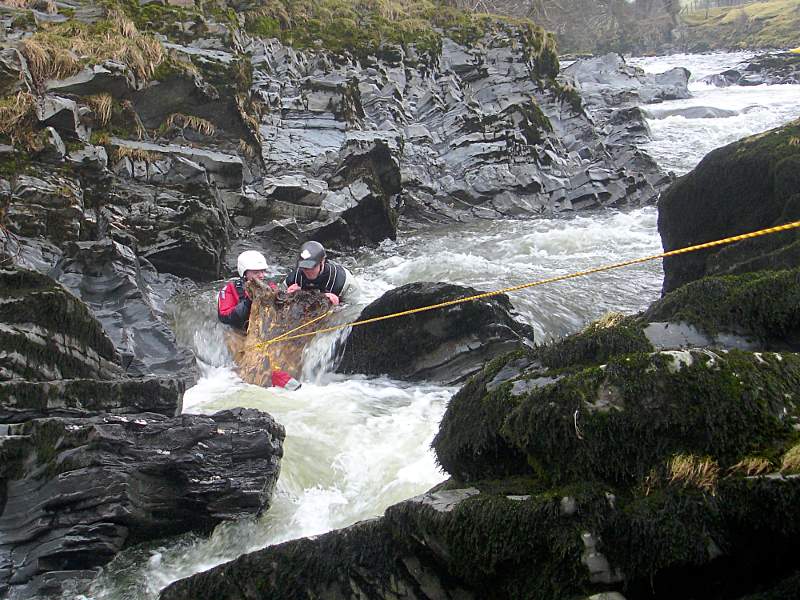 After a time every one began to drift off back to their boats to begin carrying them around. Chris and Lee, however, after climbing from the water got back into their boats and paddled it anyway as these crazy kids do. Soon every one was back on the water and we ran the rest of the trip quite happily with a few rapid dotted through out. At one point near the end we caught up with a group who were jumping, well sliding (in their kayaks) off a large rock that was admittedly quite high. One member of their group, I won't name names not embarrass but mainly because I am unaware although I believe he was called John, possibly? Anyway, he dithered atop the rock, trying to get up the courage to do it, eventually throwing his boat of the rock and prepared to jump, he spent a considerable amount of time wavering around not quite brave enough before Andy and then Rosie and I paddled to the edge and abandoned our boats and climbed up the rock to join him. Andy just ran off the edge whilst 'John,' Rosie and I stood at the top. 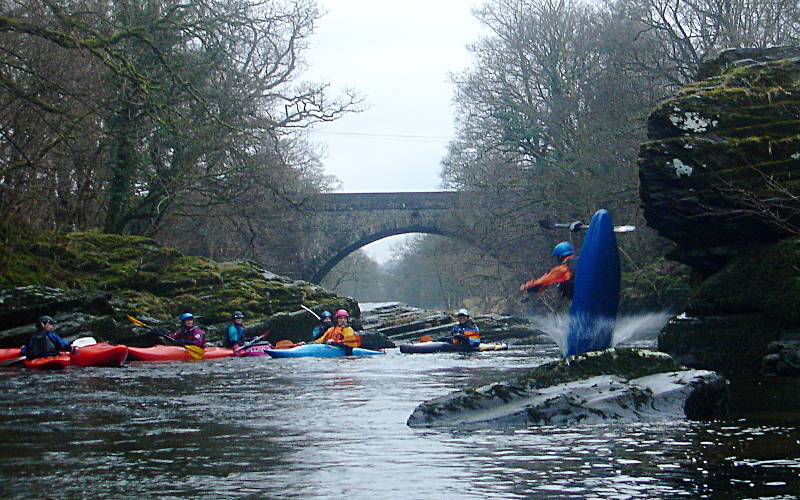 After walking to the edge I did agree with 'John' it was a long way down, however I stepped to the edge and before Rosie could change her mind grabbed her hand and practically dragged her off the top into the air between the water the top of the rock, we immediately plummeted and landed in the freezing wetness, immediately regretting it as our dry suits inflated, we let the air out and began to swim back up river to our boats. After climbing back in we paddled quickly to the end where Rosie did a roll for practice and I stood by just in case. She came up successfully and we paddled to the edge whilst Doug did his roll, Doug however, unfortunately did not successfully roll up and I feel fair to blame his pogies when he then attempted a pawlata roll instead. After this episode of getting wet we all hurried up the steep bank to the cars and the warmth of our flasks and dry clothes.

After changing, handing round chocolate digestive biscuits and joking about the old man in his tiny three wheeled car, we departed to take our John back to his car and the Florences headed off in the other direction. All in all a very enjoyable trip and I would definitely like to go back with a little more water and do it again.