On the 8th December a group of seven pioneering canoeists ventured north up to Northumbria to have a go at paddling a new river to us all. The Coquet is one of those rivers that has come up in many conversations, but always seemed to be just too far away to run it as a convenient trip especially when water levels are good locally. Too little was known about the river, other than what is repeated in guidebooks and the odd rumour, to include it as a regular worthwhile river. So every once in a while, an effort has to be made to put your woollies/ fleeces on and have a look, armed with your kayak and paddle in hand.

After quite a long drive we met in Rothbury market place, where we took the opportunity to inspect the river. At Rothbury the water level looked quite respectable: with part of the grass bank and various shrubs being partly under water; it was agreed the river looked a goer. After a quick use of the public amenities and finding a shop at 10.00am in the morning that served hot pies and coffee, we consulted Andy's guidebook and OS map and set off for a fifteen-mile drive to Alwinton.

The guidebook commented that there had been some problems over access over the years, so we decided to change into our paddling kit at Alwinton and take two cars up to Barrow Burn - our access point - and jump on the river as quickly as possible, trying to attract as little attention as possible.

As we drove up to Barrow Burn we followed the river up, where we had the opportunity to look at some of the rapids from the road. It soon became evident that the water levels in the upper reaches were not quite comparable to those lower down, however it was decided it was still do-able. The further up the river we went the more remote it became, until on reaching Barrow Burn there was only a small car park and visitor centre which was closed, and some farm buildings about a half a mile away - up river. As far as any problems with access were concerned, we were basically in the middle of nowhere - with not a soul in sight. We unloaded the kayaks and it soon became evident there was a very cold wind blowing up river which could make things difficult.

As we set off down the river we were surrounded by open heathland, which rolled up the valley hillsides and beyond. The whole river was quite remote with just the odd sheep being our only other companions. The first third of the river was really just a matter of floating down and avoiding as many rocks as possible. The first obstacle was a weir, this was quite committing because once it was recognised as a weir it was too late, you just had to boot it! Clive went through first, choosing the middle shoot, with the rest of us following his lead. 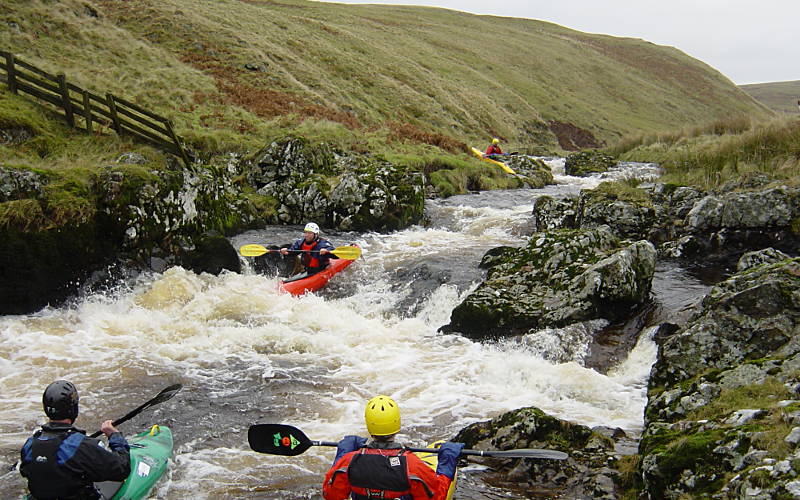 The river now turned and headed almost due east where we came to our first two waterfalls. These were really just two drops of about 1.5 metres and 1.0 metre and were quite straightforward and good fun. After 100 metres the second waterfall came into sight. This was a more technical undertaking than the first two with the main flow of water being channelled down between a bedrock facade and a large boulder on the left hand side. This probably could be paddled but was quite undercut by an over hanging rock, which meant you might have had some very bruised upper limbs and body parts. The alternative was to paddle the left or right side of the middle route, but there just was not enough water to do it. After a quick portage we paddled on down river.

The river now started to change in character with more farms/ cottages coming into sight. The surrounding hills were becoming much higher and steeper in gradient, which meant we started paddling in deeper gorge sections of river, this was an improvement on the upper reaches of the river which were proving to be a scrape in places. For the next two or three miles there were numerous small drops and steps to navigate and quite tight turns which brought fresh views of this quite spectacular countryside and interesting paddling.

Eventually we came to the final section of notable rapids: this consisted of a gorge section (a good grade 3) where the river dropped away into a gorge. This was followed by a waterfall called the "Screw Fall" (maybe just a grade 4). As we approached the gorge section we got out of the kayaks for an inspection- overall it looked relatively straightforward. I went first. On entering the gorge the speed of the water was quite amazing. My plan of going down the right hand side and cutting across to the left to avoid a very awkward looking boil and stopper went wrong, and I ended up upside down and having to roll to avoid a swim! Next Clive, Watto and Pete followed who seemed to have fewer problems than I experienced. Meanwhile Jonty, Claire and Andy took the more sensible approach and walked round the rapid. Next came the Screw Fall: we all inspected it and it did look very intimidating. The more you looked at it the worse it got. Pete was confident that it was problem free and offered to lead; I would follow whilst the other members of the group would offer bank support in case anything went wrong. Pete bobbed down with no problem whilst I yet again seemed to have problems staying upright at the start of the rapid, but finished it without any problems. 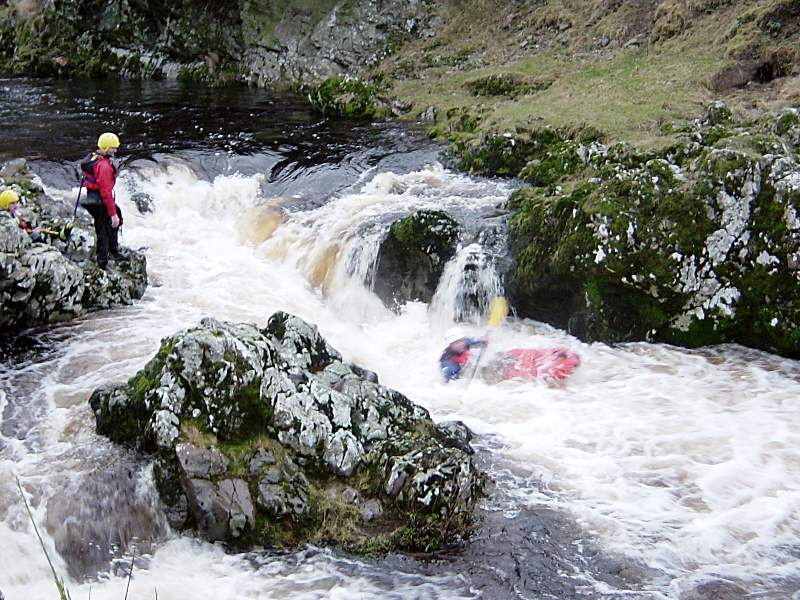 The Corkscrew is probably the hardest bit, and definitely the place to get off if it's low

From this point down to Alwinton Bridge was a rock bash and could only described as an abuse of our kayaks. The river was relatively uninteresting, I think everyone was feeling the cold and we still had the wind blowing directly at us which makes very much colder and harder work.

After getting changed and sorting the cars out we found the mandatory cafe in Rothbury where hot cups of chocolate and teacakes were consumed and the day's ingrained coldness was replaced by that warm glow inside once again.

Overall a well worthwhile trip - whilst the water level could have been better, on the majority of the river it was OK. Come higher water levels/ spate conditions it would be a really worthwhile river and worth that bit of extra effort.