Paddling in the Depths of Winter - early 2012

Only a few trips braved the freezing weather and consequent low water which, despite interruption by the occasional sudden thaw, has rather limited paddling in early 2012. Unfortunately cold fingers and photography really don't mix...

This trip had been billed as suitable for open boats and beginners. I had intended to take the open boat until an e-mail from Terry the day before, indicating frightening amounts of water coming over Redmire Falls, suggested this was not a good idea. So we met at Sleningford, Terry in his open boat (!) and the rest of us (beginners in various states of improvement ?) in kayaks, including Clive, Duane, Helen, Penny, Gareth, Tony and myself.

After changing and reorganising boats and cars we set of for the get in just north of Grewelthorpe. This involved a half-mile walk over a muddy field and down through the woods to a spot just above Hack Falls, a Grade 3 rapid. Helen and Clive led the way down this first section and waited at the bottom to catch the two paddlers who were taken out by the large hole at the bottom. The rest of us managed to avoid it or power through.

The next section down to Mickley held little excitement, but as the water was moving quite quickly, allowed some practice at breaking in and out. The large diagonal weir at Mickley was taken on the left without difficulty, followed by a ferry glide to the right below the weir, and some playing in the channel beside the small island. The small weir just below provided some more playtime for the brave.

We had to practice our rescues again in one of the small gorges where we had two more swimmers. Penny and I blamed the nasty boils, but were countermanded by Terry who insisted it was the crocadillypigs who live in the eddies. Who was I to argue with a man heroically paddling his stately craft with only half a stick ?

We scouted the weir at Sleningford from the boats and made it down over the sloping apron on river right and round the top of the island without mishap. It was some time since I paddled this section, and it appears that the repairs done following the partial collapse of the weir have made negotiation of this section a bit easier. Part of the group exited at the mill, but for some of us (Clive, Terry, Gareth and myself), the Grade 3 section below the mill just had to be done, and a great time was had by all.

With the gauge reading about 0.6m we weren’t expecting an exciting day when we got on the River Tees at Barnard Castle. We wanted to improve our discipline on the water so with only a small group decided to keep in closer formation than usual and try to use as many eddies as possible, taking the lead from whoever was front marker. Checking our safety gear on the bank we were distracted by paddlers going downstream, eventually about 30 in this group. We found out later they were from Doncaster and boast a membership of 70 paddlers. Our section often discusses our relatively small numbers and on this occasion I was quite happy that we had mustered just three paddlers.

We took our time going down river finding small waves and features. We saw a group having lunch partway down Abbey Rapids and pulled in when we saw that it was Terry – he was running a 4 star course, great to see someone you know on the river and even better that we had managed some reasonable paddling when he spotted us, well we had to get lucky one day!

It was a pretty cold day and except for a couple of comments about toes we managed to keep warm by paddling fairly hard, so by the time we got down to Whorlton Lido our main problem was being a bit low on energy for the steep path back up to the road.

A warm drink and some cake at the tea shop in Barney rounded off a very enjoyable day. Thanks to Ann and Clive.

March 4th had up to eleven people signed up for a trip on the Duddon in the SW Lake District, and the forecast suggested enough rain Friday and Saturday to make it a good trip. One found an alternative very early. Friday's rain was minimal and we waited anxiously to see what Saturday night would bring - answer, not a lot. The online EA gauges saved us a wasted drive and we met up at Bowes car park at 9am to look for alternatives. One pair had already failed, as their boats were temporarily locked up in Durham awaiting the arrival of a critical key (they went to the Upper Tees instead). The Kent looked runnable but very low, and the Levens was further away, and, being lake-fed would not come up quickly. After some debate we decided to try the Lune which runs south from Tebay by the M6. Another pair (who'd paddled this recently) cried off at the rumour of this choice, whilst two more applied Mary's rule of not paddling if it was below 4 degrees at 9am ! So we were down to just four.

We knew it was six inches above the lowest we'd run it, and the morning's awful weather (rain, sleet on the A66, snow on the tops) had brought it up to an almost ideal level. Those who eventually assembled at Low Gill viaduct were lucky with the weather, as the rain abated before we got changed, and a vicious sleet shower kindly waited until we had finished and just completed the return shuttle before blotting out the scenery.

Whilst we did the initial shuttle, Low Gill had come up, but was still not quite in condition to save us walking down to the put-in. The main river, however, was up enough to avoid scraping (checking later showed it was 0.7m on the Killington gauge). Once we reached the first gorge it was playful and boily with lots of sharp eddy lines and waves to play on - enough to require one roll, at least ! At this level the gorge seemed to last longer than usual, but, soon enough, we were passing under the jumping bridge and onto flat water for a while.

Crowders Leaps is next - a rapid which varies a great deal with level, from a narrow awkward slot to a big fast and turbulent rapid. At mid-levels like this, it's usually quite easy, but you do need to get a reasonable approximation to the right line into the top to avoid being tipped hard on edge at the start. I hadn't done this in the playboat before, and didn't have quite enough speed to get where I thought I was going. At least it's easy to roll, although I did seem to come up in a very funny position, as if mid-way through a rock splat :-(

An "interesting" line down a shallow channel on the left proved to be a daft idea, and to compound it, people followed. Only Andy persevered right to the end... must be trying to delay the main event - the Strid. Again, this is at it's most technical when low, and at this level is relatively easy, though always a little intimidating and the waves tend to chuck you about towards the rock walls which are passing quite fast ! 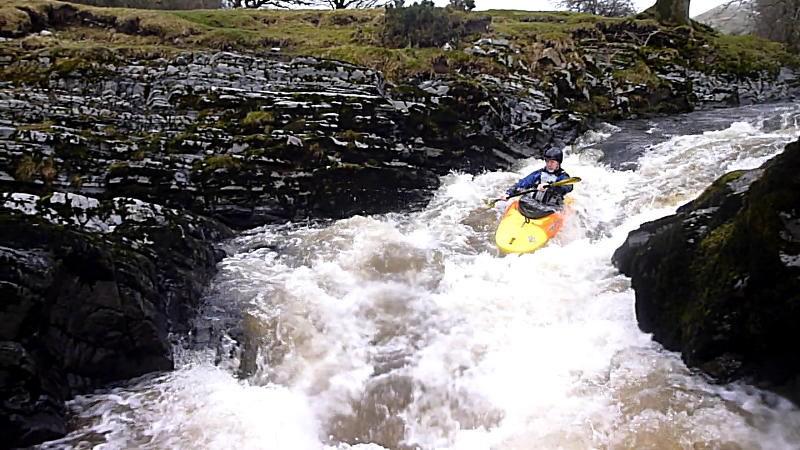 Pete hitting a good line on the Strid

We all made it down this upright, but in the cold water, no-one seemed to fancy a second run to try to improve style. A short awkward slot leads on and into the second (Killington) gorge, shorter than the first, and perhaps a little less playful at this level. This ends with a rock, which, in warmer conditions, is good for jumping off. Richard must have more blubber than me, as he considered it quite warm enough today !

We had time to get changed and debate tea-shop options, then do the return shuttle before the weather turned really nasty, with wind-blown heavy sleet across the moors driving back to Tebay. Overall a better day than had seemed likely at the start, so thanks to Pete, Richard and James.