The logistics of canoeing trips in far flung places inevitably require some compromises, but having local outfitters supply boats and other gear does mean that you have some backup. We had arranged to hire two open boats and waterproof barrels for the four of us on a trip through the Whanganui River National Park in North Island, New Zealand.

With high winds on the volcanic peaks we had intended to climb, rain, hail and even snow, this was not entirely the midsummer we had expected, and we were pleased that Wades Landing Outfitter were flexible enough for us to change dates, despite pre-booking of huts and the Dept. of Conservation "Great Walk" permit required for the trip. In theory, this was a long downstream trip, but as the river was more difficult at the top, we adopted the slightly perverse scheme of starting in the middle, paddling to the bottom, shuttling to the top, and finishing back in the middle.

By the time we had been picked up and taken to Wades Landing, filled out paperwork, been given lunch, packed stuff up and taken boats down to the Retaruke river, it was early afternoon. There are only limited places to stop, and tonight was to be the John Coull Hut, 38 km downstream. By the time we got there, both children (aged 10 and almost 8) had slept a good part of the way, and both adults had thoroughly mastered the J-stroke ! But I run ahead... 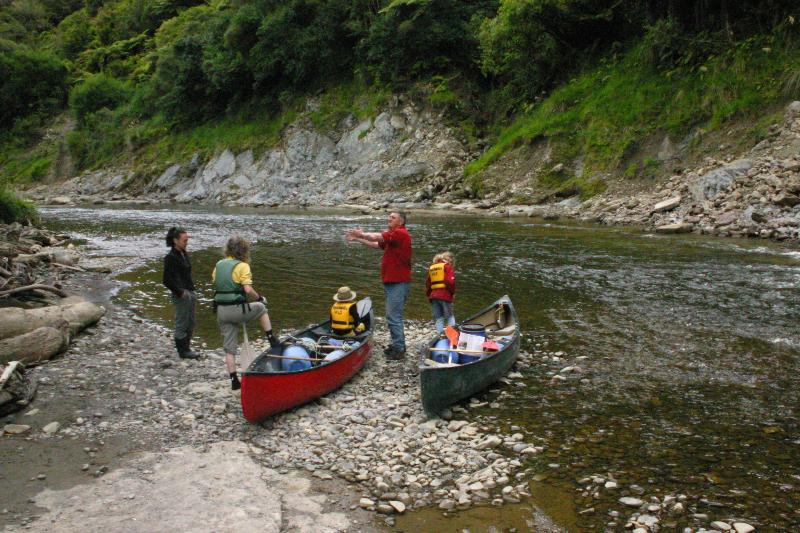 The Retaruke river is a fairly minor tributary to the Whanganui, cut into its own deep canyon in the soft volcanic ash which is the rock type throughout the National Park. We soon paddled down this, out of sight of civilisation, and joined the main river. We were a bit nervous of the first couple of rapids, but they proved remarkably easy - indeed the whole river was rather easier and slower flowing than we had perhaps been anticipating. The river banks offered few landings though, rising sheer straight into a rain forest with lots of tree ferns and no feasible walking routes - we were thoroughly committed now to at least the three day trip to Piperiki. 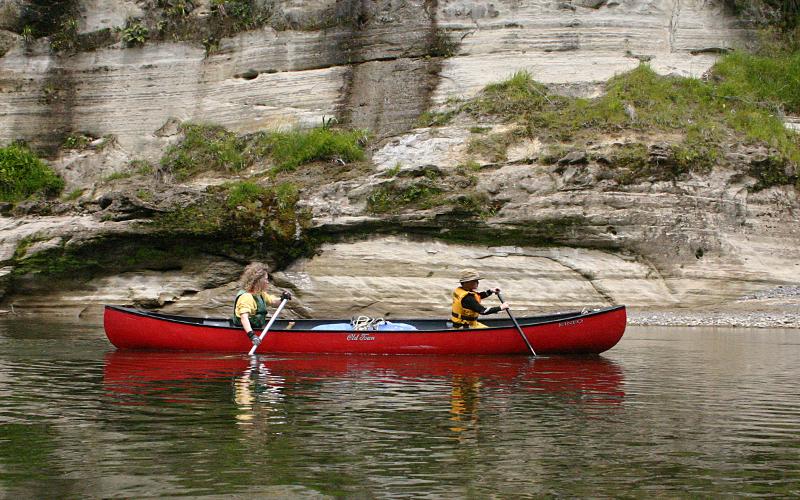 This first section of river meanders on through unfamiliar vegetation, getting further and further from any path or road. There are numerous places where the flow picks up, and even a few places where the river could be described as having rapids, but there are also many slow flat stretches. Although we had camping gear with us, we intended to use huts (of which there are only two) for both nights on the lower river, so paddled on past the two campsites in this first section - stopping early would give us even longer days to catch up later in the trip. Many groups do the section from Whakahoro to Piperiki over four days, and our arms were beginning to complain that maybe we should have done that, too !

The result of our choice was a 38 km first day, which, with an after-lunch start, meant quite a late arrival at the John Coull Hut, and not a very crisp start for the second day on the river. However, at least a mid-morning start for a shorter (only 29 km!) day made for a little less strenuous paddle. The river was similar, with few rapids, mostly in a steep-sided gorge with the papa cliffs topped by a tree-fern rain forest. We paused at the first campsite, take-out river right on a small beach, and walked up to the facilities which included, as at all these sites, a composting toilet and a rain-supplied water tank. The camp was on a series of grassy ledges carved out of the forest and included a fire-circle and an interesting carved tree-fern trunk. 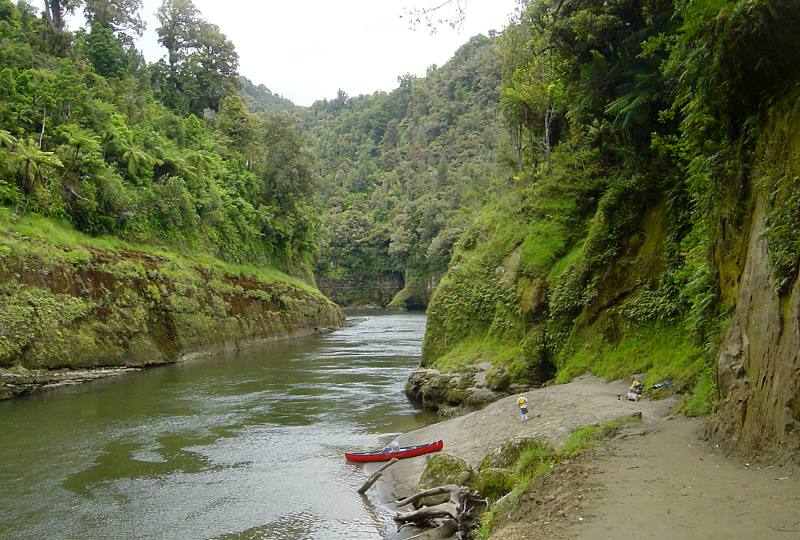 Open canoe tied up on the beach below Mangawaiiti campsite

The next landing was river left at an awkward get-out, from where a path led into the forest to an unusual visitor attraction - the Bridge to Nowhere. This is an impressively built concrete bridge over a deep ravine, intended to carry a road into an area being settled for farming. The plans never materialised, and the course of the road has been reclaimed by the forest, leaving only the bridge. On the opposite side is the campsite of Mangaparua. Unfortunately, our late start left not enough time for exploration at one of the few places where it is possible to get off the river and into the surrounding land, and we continued downstream to reach Tieke Kainga. 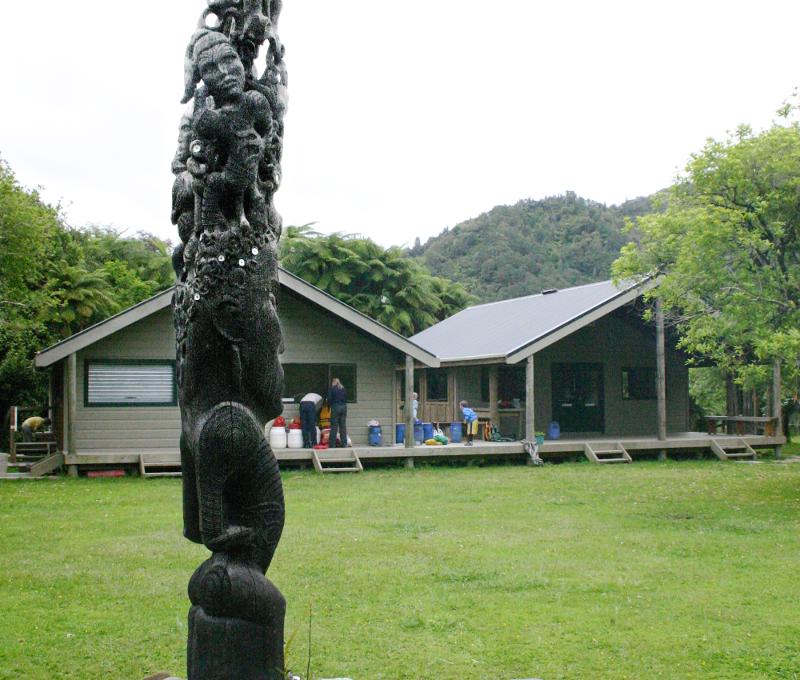 Unlike the John Coull, which is a Department of Conservation Hut, the Tieke is a Marau, or Maori living place. There is a hut with similar facilities to the DOC huts, for guests, and if the Maori are in residence there is a protocol to observe involving a welcome and an exchange of gifts. I have to admit to preferring wilderness to alien culture, so perhaps it was as well that the Marau was not occupied, but the rules (no alcohol, no drugs, no firearms) still had to be observed. One of the huts was strictly off-limits to tourists, but the kitchen facilities were shared, and the right hand hut in the photo was the sleeping hut reserved for visitors. There was an impressively flat and short-cropped grassy area, rather different from the cramped and terraced camping sites at the DOC huts, and adorned with a most impressive carved ceremonial pole of much more intricate design than the totem poles of the Pacific Northwest, familiar to sea kayakers on the western seaboards of the USA and Canada. 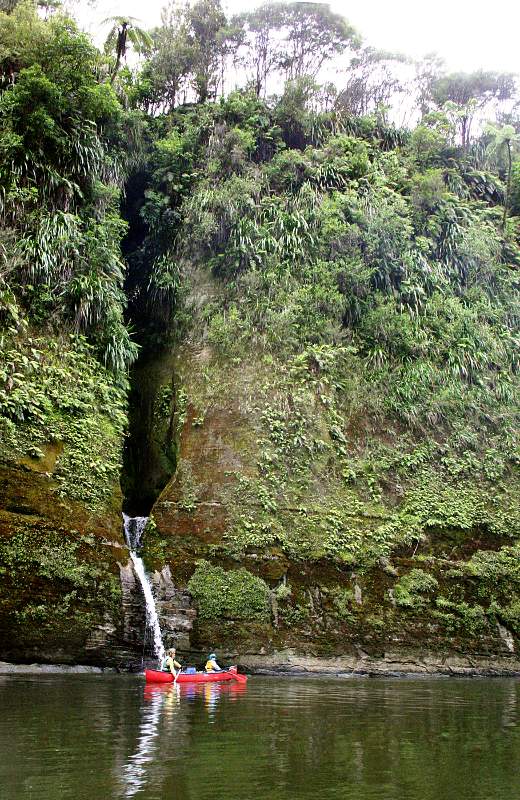 The day to the take-out at Piperiki was mercifully shorter (21 km), but with some more exciting bits of rapid at the end, and a deadline to meet for our shuttle back to the top of the river. We thus got a fairly early start, paddling from a wide part of the valley at the Tieke, into another stretch with steep cliffs and slot canyons bringing in tributary streams. To a caver (or canyonneer) their dark interiors looked very inviting, but none were really accessible from the river.

We paused for brunch at Ngaporo, another DOC campsite where a large group were just getting organised to set off for their final day. We lingered a while to give them chance to set off, which meant we could watch the line they took down the next set of rapids, which demonstrated one of the major hazards of the river - lots of barely submerged dead timber. With water levels lowish, many of these trees show up above the surface (as in the photo below), but all were waterlogged and many less visible ones lurked unseen. Unless the water was moving fast, only the barest ripple gave away their location, so a careful lookout had to be kept. 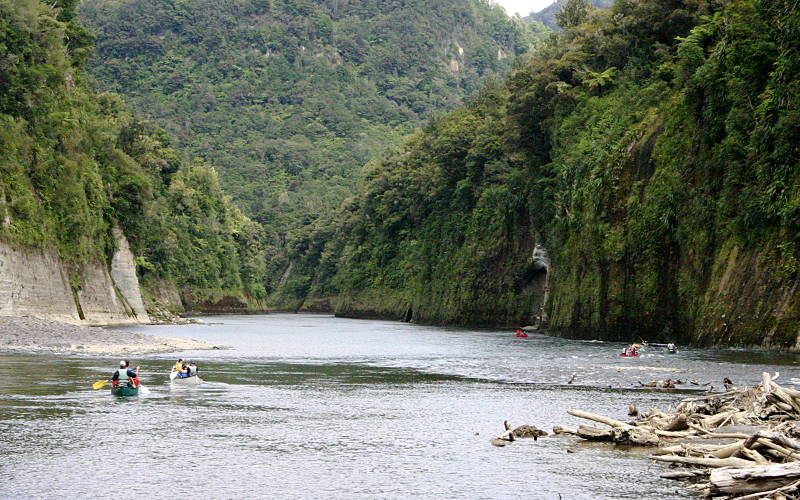 Below Ngaporo, the Whanganui has a few fast stretches, and lots of part-submerged timber

Just before the end the valley opens out, but there is one lot of quite fast rapids with some big waves which caused one of our boats to get a little damp. Andy stopped to empty this out, and another few minutes saw us at the Piperiki boat ramp where it turned out that the various outfitting companies took turns in shuttling clients back. We soon found ourselves in a bus towing a trailer very heavily loaded with canoes. Initially, we returned to Wades Landing where we found that the outfitter's wife had been a Rohan Rider in the Lord of the Rings films, and Michael had a good time swinging her sword about while our further shuttle was arranged to the top of the river at Tamauranui. Here we camped by the riverside in a rather urban setting at Cherry Grove which turned out to be the town's park.

The put-on is at the confluence of two similar sized rivers, and in the early morning mist was quite eerie as we steered the boats out through the shallow water to find a channel. The river soon picked up, however, and the sun quickly burnt off the mist. This upper section is in a more open valley in farmland, with a road nearby for most of the way and feels much more escapable (there's an alternative put-in about half way through the day). The rapids, whilst a bit faster, were shallow and we were giving each other enough space that photography was difficult. However, the speed of the water meant that the 36km to be covered went by fairly quickly.

Civilisation recedes just before the National Park boundary, and rain forest replaces sheep pasture. The weather had become quite dull, but we soon spotted the landing river right for Poukaria campsite (no nice huts in the upper section). During the evening, the weather went downhill and the rain set in. Next day, it was still pouring, and the river had come up a lot and was clearly still rising. All the DOC literature about this "Great Walk" suggests that paddlers should stay off the water if it rises fast, if it colours up, and if logs start floating past. All these seemed to apply, so we sat tight and watched the river come up more and more. By early evening, we were surprised to see some more boats arriving - a small guided group whose leader was obviously more familiar with the river than us. He reckoned it would be fine to continue next day, but a short while later our outfitter came upstream in a jet boat to check that we were OK. He reckoned the level would stabilise and tomorrow all would be fine too, so we elected to continue our journey next day and settled down for another damp night.

Next day indeed dawned brighter, though the river was even browner and a little higher, but with all the reassurances we had received we set off reasonably confident, paddling with the other group, who were in a mixture of open boats and kayaks. The increased flow made for quick progress, and the rain meant that all the side streams were pouring impressive waterfalls into the main river. 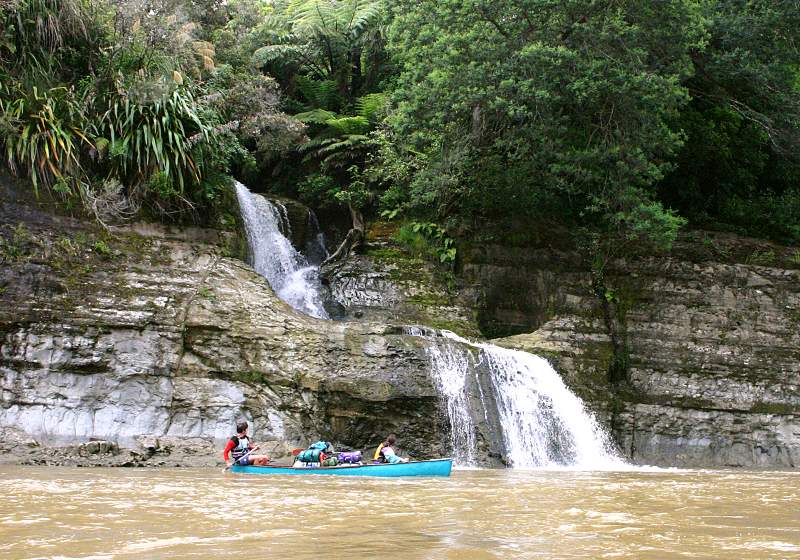 There is one major tributary from river right, the Ohura River, and a landing on the same side just downstream to see some more impressive Maori poles. To make this landing, we needed to cross the outflow from the impressively swollen river quite near its mouth and break out in the eddy below. We had no problem with this, but one of the first-time kayakers in the led party hadn't got the idea of leaning downstream as she crossed the flow, and capsized. This led to a bit of a faff, but even after the ensuing rescue, we all made the eddy and landed to look at the Maraekowhai Niu Poles: the war pole 'rongu niu' and the peace pole 'rere kore', marking stages in the last major rising of Maori tribes against the European colonists.

With only 22 km to paddle, and a healthy fast flow, it didn't take long to reach the Retaruke river coming in river left. Paddling half a kilometre upstream in this was a bit more like hard work, however. We had by now, with 146 km behind us, pretty much sorted out J-stroke and could power across the ferry glides whilst eddy-hopping our way up to our launch spot of six days earlier, where we were met by a trailer and transport back to National Park village.