The Boldron New Year gathering seems to have grown even bigger than our October Paddlefest, with more than 25 paddlers on some days and SOC members making up a fair proportion of those on the river. Even with two different rivers each day and splitting into two groups on each river, that has meant some biggish groups on the water for the harder rivers.

We started on the 28th December with a "family outing" on the Upper Swale (actually quite a big group, not just us:). The early morning gauge reading was a friendly - indeed lower than ideal - 0.5m, but we could see that it was rising, so were hoping for a perfect level for a first time trip. In fact it was coming up quite quickly and those who had been before could see that it was a bit higher than we'd hoped for as we drove up past Wainwath towards Hoggarths Bridge. As usual in such circumstances, with Mary nervous about the trip, we exuded confidence and just lied. Starting at Hoggarths gives plenty of warm up time and some small drops to gain confidence, so all went very well at Wainwath with a sensible choice made for those new to the river to actually get out and have a look. We all pointedly avoided drawing attention to the Park Bridge gauge until Mary was well past it, but noted that 0.96m was quite a chunky level for a first run (although not quite as high as my own first run - that was on a river starting to drop, whereas today it still hadn't quite peaked out).

Rainby was a definite get out and look, and with a different group from my first time, advice on the best line was also different, although Mary chose to run the way I'd done it previously, down the narrow tongue on the right. She hit this just right, but didn't manage to roll up at the bottom, though this didn't seem to dent her confidence too much. Most of the rest of us took a boofing line on the left which seemed to work quite well at this level. James decided not to run and his walk round seemed to take a long time to get back to the river several drops downstream. 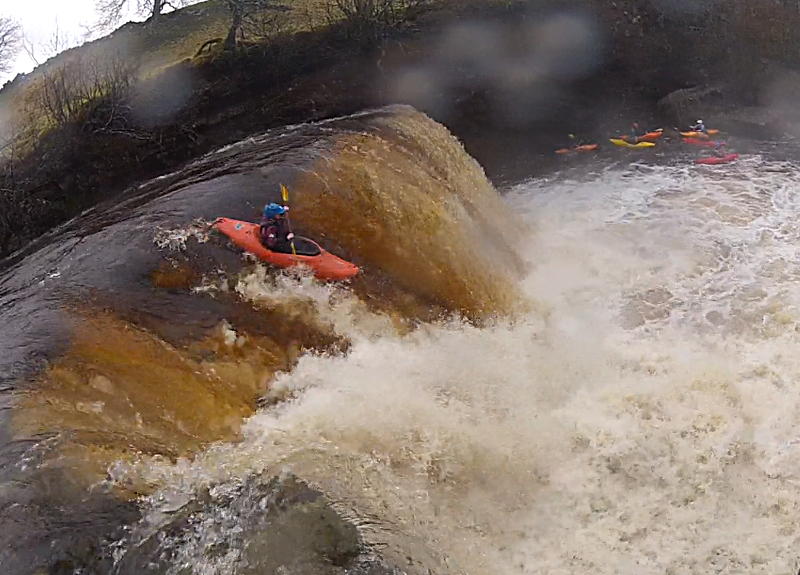 Mary taking the chute on the right on Rainby Force

"The rapid" always has a choice of lines, and Anthony pioneered a version of the boof off the river right ledge that didn't involve crossing to the left below, so I tried that and thought it worked quite well. Nicky's advice was to run nearer the middle and head left, which Mary, Michael, Sarah and others did - with complete success. 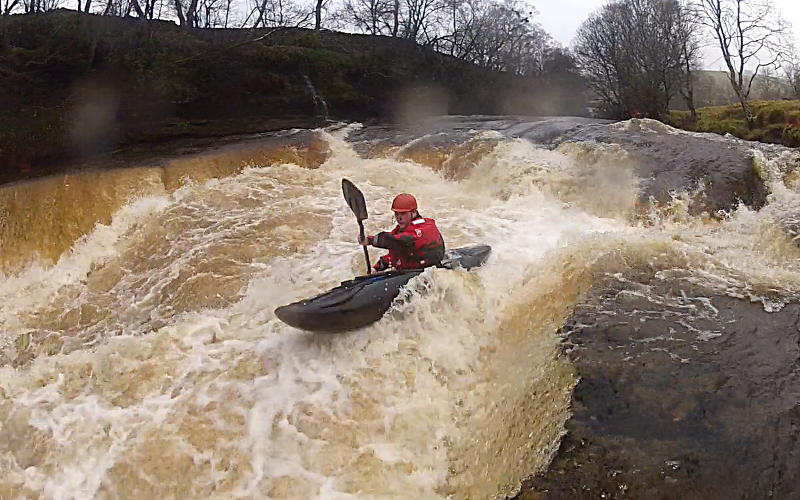 Michael midway down "the rapid"

So, on to Catrake, and at this level, it was sensible to stay well left. Ideally one would paddle forwards over the ledges, but some directional uncertainty among the group led to at least one going over in an unconventional orientation and still surviving. Definitely on a roll now, with just fun rapids down under the footbridge and a get-out above Upper Kisdon, where anyone still nervous could simply walk out. In fact, everyone was happy to run the Upper, and cross to the take out in good time before Lower Kisdon. 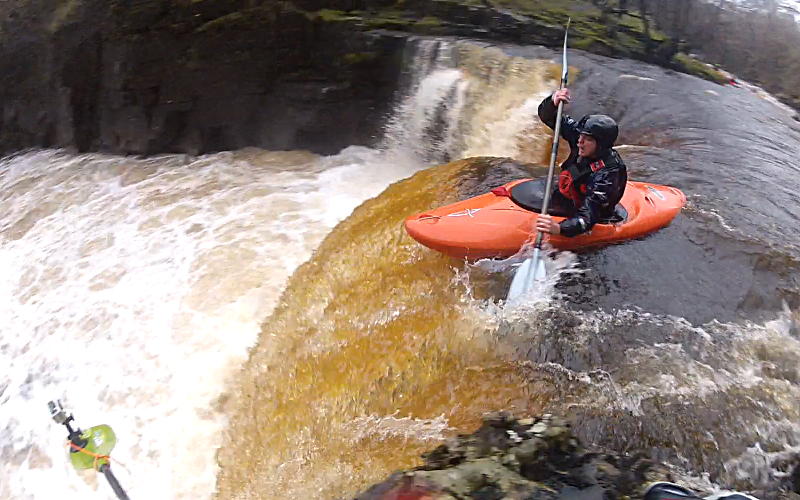 Here a lot of talking and arm-waving ensued, and not everyone chose to run the biggest drop. I think all who did chose the right hand line over the ledge (which isn't too jarring at this level), and no-one who ran it came to any grief, though the odd roll was required. Having done this before, I opted out, as did Mary and Michael, but Sarah, back from her Chile trip, made it look straightforward. That only left the heinous climb out and walk back to Keld - I'm sure that's why Swale paddlers get poorly backs :-(. Thanks to all who came and supported us on this trip - possibly the first full family (mum, dad, both kids) descent of the Upper Swale ?

The other group on the same day ran the Tees from Barney to Winston with Abbey at quite a chunky level, and by all accounts, had a good day out too.

With the Tees tanking on the 29th, a large group chose to go off to Alston and paddle the South Tyne - fast and bouncy. However, a dozen of us, some of whom had paddled it before and others who had the Eggleston Burn at the top of their wish list for some time, headed for that as the destination of choice. We split into two groups, and there were at least two other groups on the river, which was perhaps a little crowded for a spate beck like this - I think we would have been better as three groups of four rather than two groups of six. 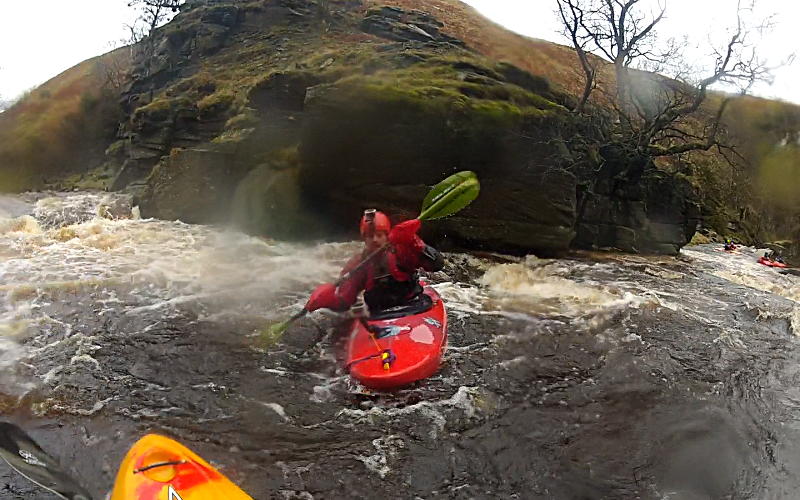 The trip produced enough carnage on camera that I felt that a Keystone Kops movie was appropriate (it's not, strictly speaking, a silent film). There's a key landmark rock that I'd spotted and grabbed an eddy - but as I was last man in the group, and the first man swam, those ahead had little time to grab a space (and two failed), resulting in quite a bit of gear making it's own way down the river. 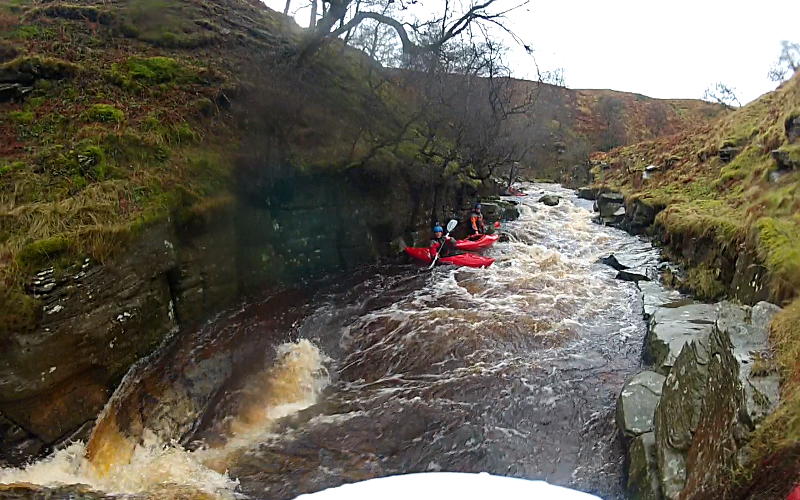 Some of us now portaged for a bit, whilst one managed to get out river left and get back on to give chase, and two others missing vital bits of kit, commenced a somewhat farcical march up and down the steep fellside in the sleet. Communications were a bit stretched, those portaging on the right dropped back in two different places, and one had to wade a long way upstream to where I'd lowered my boat but not felt safe to climb down after it. As we regrouped, our second party appeared, Alex managed a rather spectacular pin and equally rapid exit, and that group fragmented as some paddled on to see if help were needed downstream. 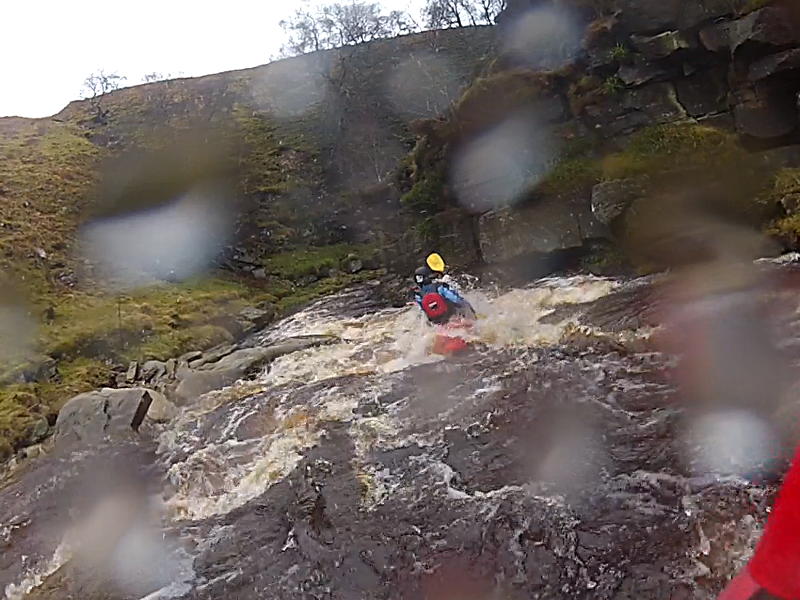 Following Alex down the last section of East Skears gorge

We finally regrouped at the exit from East Skears, where a number of other minor incidents occurred, including a lot of pins (not just paddlers in our groups), odd capsizes and a brief trip under a partial siphon... Some people escaped from their pins by others crashing into them, to become briefly pinned in turn - thank goodness it now flattened out a bit and we could spread ourselves out between the rather more plentiful eddies ! 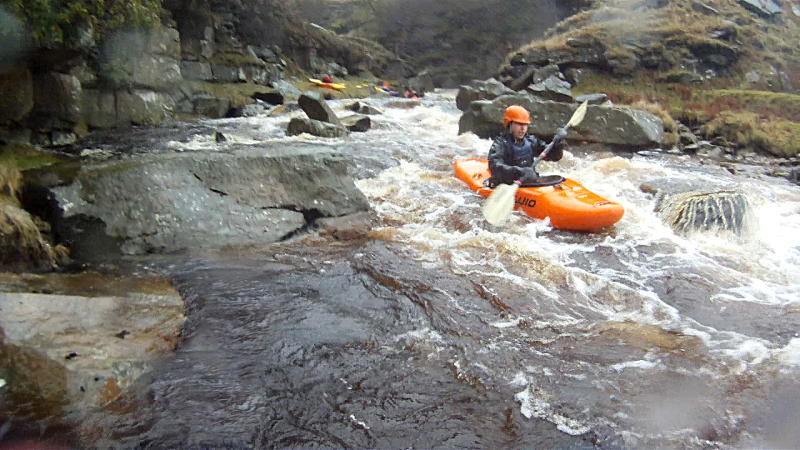 One drop which has a reputation for backlooping boats and holding people proved quite innocuous at this level, and we were already aware of the river-wide tree just above the high bridge near the get-out, so this gave no-one any trouble. A few folk were still eager enough to go on and paddle the Tees Racing Stretch, which only took 15 minutes of actual paddling (it' s usually about 40, plus playing time) through long trains of waves with a few man-eating holes to be avoided.

After this, it was something of a relief that levels came down a bit, and Sunday's main trip was the local Tees Greta, at 0.64m on the Rutherford weir which is a good introductory level and very similar to that on our trip of two weeks earlier (a bit lower than the club trip one week ago - it's getting to be a popular trip!). We decided that there was no call to be running down Rokeby and into the Tees, which was probably sensible as the level had dropped further by the time we reached Gretabridge. Clive and Andy were getting a bit cold as the rest of the group inspected the final gorge and decided to run down and wait at the bottom. Andy found a new way down to the river right ledges just above Hell Cauldron, and got some good video of the rest of the group running down. 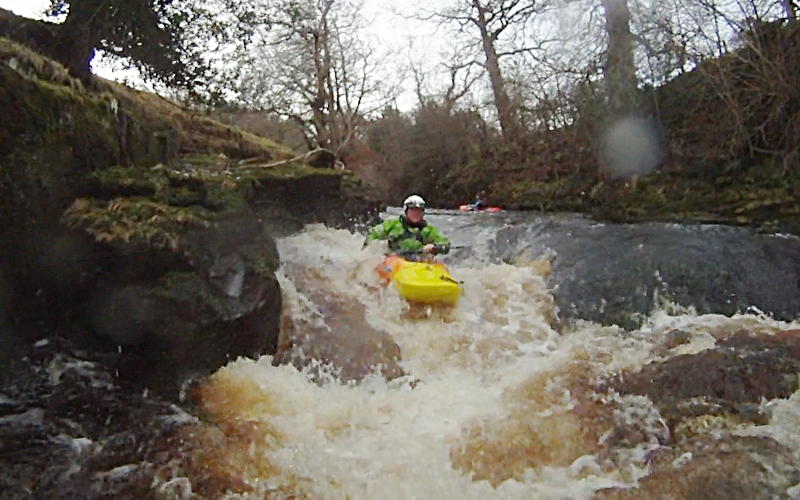 We again had to split into two groups to run the Allen on New Year's Eve which was very high. A lot of the boulder garden rapids were washed out and straight-lining mid-river worked well for most, though there were a couple of swims early on (also featured in the Karnage Kapers video), and Richard's boat escaped downstream, leaving him a difficult walk out at the bottom of a steep forested bank. The main event on the Allen at this level is Hag Fall, where the usual route down river left led to a serious stopper which we wanted nothing to do with. A few portaged here, whilst the rest ferried across to river right and found an easy route there, though a tree had fallen into the river giving a strainer on the right which gave one or two people a bit of a moment. Easier water again downstream, and not far from the end, we found Richard's boat pinned on a tree by the left bank. Several people immediately produced pin kits and a couple of pulleys soon had the boat recovered just in time for Richard to turn up walking from the take-out to a pleasant surprise - he really hadn't expected to see it again !

The other group today set out to do a "Tees integrale" starting at the put-in for the Upper Tees and paddling all the way down to Winston Bridge. A few odd incidents slowed them down a bit, water levels weren't quite as high as they had been, and daylight really is limited, so I don't think they made it quite all the way (cars had been strategically placed to cover this eventuality).

There was more paddling on New Year's Day, but not everyone was as crisp as you'd hope and some elected not to go... which included myself, so I can't now remember what was done. I know that Whitsundale Beck provided entertainment for a small group on one of these days, and several other rivers were paddled over the five day paddlefest - it's hard to keep track of everyone with such a big gathering !